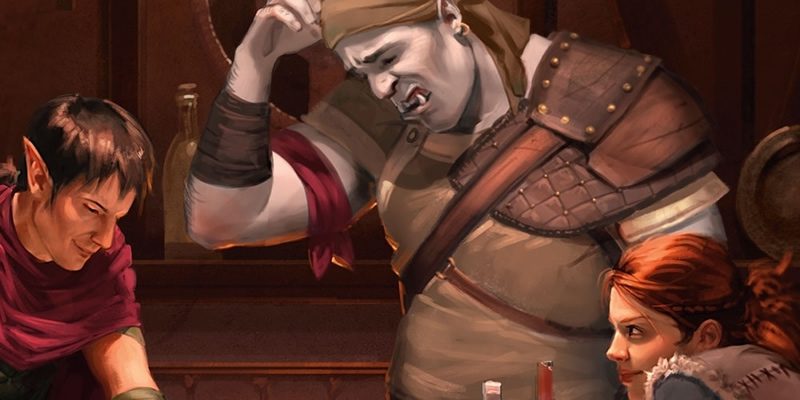 For whatever internal reasons, July’s UA article was delayed until the last Monday in July. But here we are, and I’m going to say a few words about it. “Quick Characters” presents dice tables for generating characters, largely constrained to the character options found in the D&D Basic rules. I don’t think I go too far to say that this article has been roundly – perhaps blisteringly – panned by its audience. I confess that it doesn’t have a lot of applications for the way I run my game, but I don’t think it deserves the reaction it has gotten, either.

First and foremost, this content is free. The article is a free MS Word document (that was an odd choice, but probably a mistake somewhere in the content pipeline; these things happen), but more than that, you don’t need a Player’s Handbook to consume this content. I don’t believe any other UA articles have scrupulously avoided requiring a full copy of the Player’s Handbook to use. I can’t prove that there are individuals or groups out there using what’s available in Basic, but if there are, I think it’s awesome that WotC is keeping them in mind.

Many of the complaints about the article are something like “we waited all month for this?”, which just serves to remind us that even free stuff is worth complaining about if it’s not served on a sterling-silver platter. That silver plate your mother keeps around? It’s for the goddamn peasants, or the bourgeoisie at most. No, this article does not obviously playtest any serious content that we expect to see in the future – but what if it does, and they’re planning an alternate approach to D&D unlike anything we’ve seen before?

Folks, you do not know anyone more dedicated to D&D than Mike Mearls and Jeremy Crawford. They have been superlatively faithful custodians, while also constructing something new and influential. If you’re one of the surviving First Gen gamers who played with Gary and Dave, you still don’t personally bear the burden of the fandom. Entitlement is an unworthy emotion – dismiss it.

If you have never experienced choice paralysis in character creation, then congratulations, you probably have a high level of system mastery and confidence in your gaming group. This is not universal. There are many other kinds of fans in the D&D world: casual players, new players, players who climb on rocks, players who will otherwise sit there dithering when they could jump right in and start having fun. Players who sincerely believe – rightly or wrongly – that they will be mocked for suboptimal choices. Dice are great for washing one’s hands of the outcome.

5e character generation is wonderfully fast and easy for those of us who grok it in fullness, and much faster than 3.x or 4e (both of which are faster than Skills & Powers 2e, but I digress), but it’s still complicated for some players. You want these players to be supported in a robust manner: this is how the hobby grows. We want the hobby to grow, because anything that does not grow, dies.

“Quick Characters” has practical applications for the DM, as well. Roll a fistful of dice, write down the results – you’ve generated a Rival Adventuring Party, one of the most dangerous and compelling threats PCs will ever face.

This could also be a great way to introduce the infamous DCC character funnel. If you’re not familiar, this is a sort of euphemistic construction – the first session of any DCC game gives each character a small band of useless schlubs, who proceed through the adventure until only one is still living. That character becomes the one that you advance. With this document – or even better, with a trivial bit of coding – you could generate normal first-level PCs for the abattoir.

Expanding from that idea, there are a lot of alternate game styles that could do something really interesting with this. An increasing number of video games involve the player controlling a large number of adventuring characters – think of XCOM, Massive Chalice, and Darkest Dungeon. (Coincidentally, I’ve just named three of my favorite games from recent years.) One of the key challenges of these games is that you often don’t have the exact kinds of human resources that you really want for a task – you have to solve the problem a different way. This document could create some of that feeling in a game. When you don’t have the Thing You Want from the start of play, take that as a character or gameplay goal, because the game and the narrative are more compelling when you want things.

Oh! And it would be phenomenal for creating an adventuring party for a Cold Open. If you’re not familiar with that term, watch some mystery-of-the-week shows – the Cold Open is the intro scene that generates the victim. Roll up characters and play them until they die horribly, establishing the threat that the actual protagonists have to face.

In all seriousness, the only part of the “Quick Characters” document that I genuinely dislike and would hasten to change for my own use is the d6 table of ability score arrays. I have my own, much more generous table of ability score arrays, used as a “safety net” when players roll ability scores. Sticking someone with two 8s and a 6 is… well, probably about right for the DCC character funnel, but it’s not to my tastes. Also, I’ve had someone play a 14, 14, 14, 12, 12, 10 stat block (or very close to it), so I can confidently say that it’s more frustrating than fun for both the player and the DM. If D&D explored different stakes for failure, as a lot of games have done in the last ten years or so… but no. Instead, there’s a lot of whiffing and disappointment, and y’all, I’ve been an Atlanta Braves fan all my life, I don’t need this.

I judged this article harshly when I first read it, too. My wife disagreed, which is a good sign that I need to get out of my own perspective. The accumulated bile of the internet went far beyond what I felt was fair, so I gave it a deeper look. What I found was a tool set that was probably created in a hurry (I don’t actually know, but I’m guessing that one or more of Storm King’s Thunder, next month’s article – in just one week! – or some other project has eaten up dev time), but that could be a useful thing to keep in my back packet for a variety of situations, or could be used to run a completely different style of D&D.

Also, gamer entitlement is a fatal flaw of our generation. There is a lot more of an audience out there than you and your gaming group. If some players in your group have very high system mastery while others have none, making everyone use this could be a great way to level the playing field.

Interview with James Sutter – Co-Creator of ...