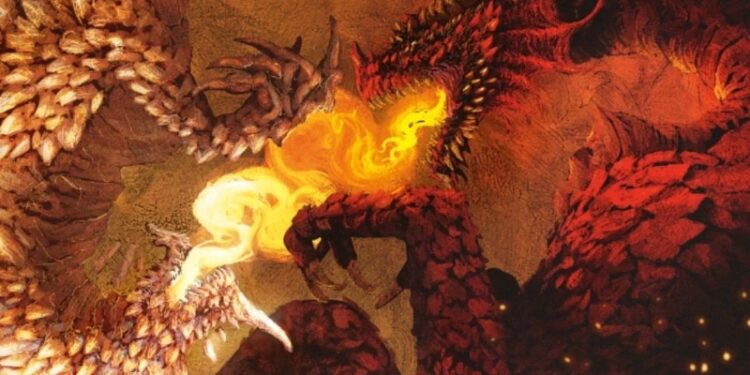 So there I was, raiding a wizard’s library as one does, and I found this book labeled For Review. Someone (James Wyatt) has dragons on his mind, and we need to get to the bottom of this. He isn’t working alone – there’s a whole cabal of wizards backing him up, along with some top-tier mercenaries they hired for the job.

Which is to say, I received a review copy of Fizban’s, I’m reviewing it here, and I can’t even pretend that I’ll get through this in one article.

The introductory chapter is short but electrifying. It’s a high-level overview of multiversal draconic mythology: D&D has decided that if they’re going to make dragons half of the title, they can be the unifying through-line of all these Material Plane worlds. We’ve seen references to the First World going back to Tasha’s Cauldron of Everything, but this expands on that lore with Bahamut, Takhisis, and their firstborn offspring Sardior the Ruby Dragon.

I’ll probably get into this as we go, but Sardior is one of my favorite things in all of the lore here. Sardior is dead and shattered, but their (the text is phrased to avoid using any pronoun for Sardior) shards became gem dragons, and the gem dragons now work to reconstitute Sardior. Sardior’s shattering may have been the same moment as the shattering of the First World.

I also like the angle this takes on Tiamat and her relationship to Bahamut. It’s a lot to get into here, but it shows a motivation other than because she’s Eeevil for her clashes with Bahamut and the other gods, while at the same time Bahamut isn’t really trying to fight her.

Four settings get pride of place for a discussion of how Bahamut, Tiamat, and the Elegy for the First World: Forgotten Realms, Greyhawk (Io gets name-checked here), Dragonlance (canon change: Paladine really is Bahamut, Takhisis really is Tiamat, even and especially where this creates baffling contradictions), and Eberron (where Siberys, Eberron, and Khyber take some explaining). I can’t fathom why the entry for FR doesn’t even touch on Tyranny of Dragons.

Finally, dragonsight: an idea that some dragons connect with their selves on other Material worlds – that there’s an Ashardalon echo on many worlds, and they can interact. Possibly, as in Ashardalon’s case, even run afoul of one another and be destroyed. This idea is going to get a lot more airtime later in the book, but the core idea is that what happens with or relating to dragons echoes across the Material worlds. Like I said, unifying through-line.

If you’re one of the many, many people to come to D&D without playing 2e, well, gem dragons have been part of D&D for a long time now, but they didn’t get a lot of priority in 3.x or 4e. The 5e design team has been clear about their interest in gem dragons, going back to the sapphire dragon stats included in the Laeral Silverhand’s Explorer’s Kit.

There’s also a sidebar about the fact that creature types are now capitalized. It’s a strange style change seven years into an edition (and contrasting the last 47 years of D&D’s style), but… okay. Mostly they’ve just taught me how things should look to such a degree that it looks wrong.

We get three new races, two new subclasses, and three new feats. It’s mind-boggling to think how much less player-facing content this book offers (while still feeling sufficient for 5e) than the 3.x or 4e Draconomicons. If you’re coming to this book expecting to find a dragon-related option for every character class, this book isn’t that. (There is more player-facing content than just this chapter, but it’s still modest.)

First up, you can use the PH dragonborn (as the text spells out), but here we see what a rebuild into the new race dynamics looks like. Since I’ve often heard the PH dragonborn criticized for being underpowered, I think there are good reasons to make them an early revision. We did see all of this in a recent-ish UA, of course. Oh good Lord, it was April? What even is time.

No changes in their story, so we can get right to the mechanics.

Overall, this is a very substantial powerup for five dragonborn types, and I would absolutely play one of them.

We haven’t had one of these before in official rules. Their theme reads a bit like someone riffing on the roster of Lantern Rings in DC.

There’s no legacy of gem dragonborn rules to compare to this outside of the UA, but I like what I see here. Also the gem dragonborn art on this page is cool – the choice to give them a smoother, glossier texture than the red dragonborn on the facing page and the copper on the page following is very striking.

The flavor text responsible for differentiating metallic and chromatic dragonborn in a nonvisual way is poetic, and communicates on one hand some ascetic loneliness, but also dangerous things made safe by sapient will. At some risk of overstepping the metaphor, maybe what we have is chromatic = id, gem = ego, metallic = superego. (Uh, I am not a significant student of Freudian psychology. Be gentle in correcting me on this.)

My only issue here is some concern about the action denial power of Enervating Breath. Worth noting, though, that we’re also going to see some shifts around Legendary Resistances, including more creatures with 1 use per day, some creatures with 4+ per day, and Mythics getting to replenish their legendary resistances when they shift phases. Stick with me for several more articles in this series.

Up front – I like the subclasses we get here, but I’m a little surprised there’s no Dragon Knight in fighter or paladin. It’s not wrong, I just think back to the Draconomicons and the content that stuck out to me from those.

Way of the Ascendant Dragon Monk

Dragon monks are about as iconic and grabby of an idea to me as dragon knights, so I’m into this. The flavor text gives only a nod to chromatic dragons and less to gem dragons, which is a little surprising, but it still works. It’s more surprising because the subclass offers poison damage, which chromatics but not metallics use.

I can’t think of another monastic tradition that pays the monk to think about positioning, keeping opponents clustered, and moving into and out of being surrounded quite like this one does. It’s driven by cone, line, and point-blank sphere AoEs – still playable in theater of the mind, of course, but enjoying some of its most rewarding play on a grid.

I love what I see here, and I think you’re making an odd choice if you start a Four Elements Total Landscaping monk rather than an Ascendant Dragon monk (assuming you have access to both, obviously) any time before the ’24 revision. (I don’t know anything about what will change for 4ETL monks in the revision, but it doesn’t take a genius to know that the subclass is reviled in surveys.)

This is “what if Beast Master, but a lesser dragon rather than a beast.” Something dragon-like as a companion to a hero has been popular for a long, long time (Kitty Pryde), so making a pet subclass? Heck yeah. Also, the Drakewarden Origin table is six different kinds of amazing.

I love the heck out of this subclass. The worst I can say of it is that like a lot of ranger subclasses, you need a good to great Wisdom to feel like you’re getting the most out of it. (Or: why my orc ranger went Hunter rather than Monster Slayer.) On the other hand, the dragon companion is awesome as hell and just gets cooler, and I think most of us are into getting to ride dragons and burn Thread out of the sky, right? (Holy forking shirtballs there are a lot of 15th-level rangers knocking around Pern.)

Heroes of the Dragon

There’s a cool d10 table of how your character is connected to dragons, along with classes most appropriate to each of those options. Numbers 1 and 3 on this table are your dragon knight/dragon cultist option, so that’s my one “absence” from the subclass list sorted. Number 2 is Argonnessen from Eberron.

Number 10 is how you eventually get Beowulf killed, you jerk. Don’t you understand that he’s going to uphold the comitatus code even when no one else does? Read a book!

In addition to being feats you can buy in place of an Ability Score Increase, the book also suggests using them (or any number of other feats) as Draconic Gifts, which might come from a dragon’s favor or from absorbing some of its essence after slaying it. Man, the Dark Souls vibe I get off that.

Gift of the Chromatic Dragon grants two features, Chromatic Infusion and Reactive Resistance. The first is +1d4 damage of a draconic energy type, for 1 minute, activated as a bonus action, 1/long rest. It’s sort of divine favor but without concentration. The second is a reactive resistance against acid, cold, fire, lightning, or poison for yourself – a lot like the Drakewarden’s Reflexive Resistance, all the way down to proficiency bonus uses per long rest.

Gift of the Gem Dragon gives you +1 to Int, Wis, or Cha, and Telekinetic Reprisal. When a nearby (10 ft) creature deals damage to you, you get to hit them back with 2d8 force damage and a 10-ft push. They get a Strength save to halve the damage and resist the push. Proficiency bonus uses per long rest, etc. It’s a nice panic button for getting enemies off a squishy caster, though you may not be pushing them far enough that they’re out of movement speed to re-engage with you.

Gift of the Metallic Dragon grants two features as well: Draconic Healing and Protective Wings. The first teaches you the cure wounds spell and gives you one free casting per long rest. The latter feature gives you a reaction to add your proficiency bonus to your AC or the AC of a creature within 5 feet that has been hit with an attack, potentially causing the attack to miss. Proficiency bonus uses per long rest, of course.

That brings us to the end of Chapter 1. As you see, it’s a lot – but the next chapter, Dragon Magic, is no slouch for players either, with spells, magic items, and supernatural gifts. I am a huge fan of this book so far and that opinion is here to stay.