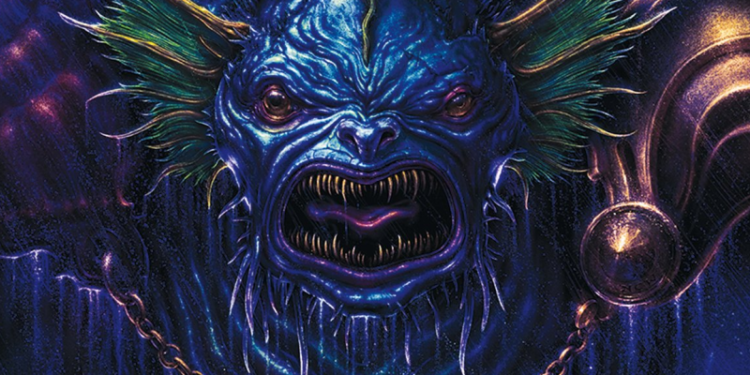 Setting10
Adventures9
Rules10
Monsters9
9.5Overall Score
One of the best adventure books WotC has released. Their setting presentation is the strongest 5e has yet seen.

At the request of readers, I’ve picked up a copy of Ghosts of Saltmarsh for today’s review. Okay, we can be real with each other and say that I was going to buy this anyway – I am an absolute sucker for their alternate covers – but whatever, don’t judge me. I’ll be covering setting and adventure content only lightly. In the main, I’m here to talk about Appendix A: Of Ships and the Sea.

The book opens with a setting supplement for Saltmarsh and environs. If you’ve read anything about this product since the first early reviews were posted, you now know that the default setting of this book really is Greyhawk, not Forgotten Realms. I’ve never gotten into Greyhawk – I can’t overstate how much the naming aesthetics turned me off of it – but if the whole setting were presented with the juicy conflict of this chapter, I would be a new superfan.

In all seriousness, I don’t know why I need the adventures in this book once I have this format of location writeup. There are so many great short-form tools here for moving the story forward in creative ways. I absolutely love the d20 tables of sample events broken down by Saltmarsh factions, a d10 table of Dock Rumors to drive player investigation, the d6 table of jobs at Hoolwatch Tower, and so on. Even better are the sections contextualizing downtime activities in Saltmarsh.

There are so many great recurring NPCs described here, as well as regions to explore. Some of the exploration-pillar ideas we saw Mearls playing with in UA and Happy Fun Hour quite a while back show up here. The sense of the fantastic has a tone of gloom and danger that is exactly my speed. I love that there’s a discussion not just of how to turn Ghosts of Saltmarsh into a campaign, but also how to weave in the adventures of Tales from the Yawning Portal.

But wait, there’s more! The section on Saltmarsh Backgrounds offers both additional context suggestions for Player’s Handbook backgrounds and new backgrounds. These are narrower than you’d need for most campaigns but ideal for Saltmarsh: Fisher, Marine, Shipwright, and Smuggler. Honestly, don’t even play these adventures without a Shipwright – I’ll Patch It! is indispensable, verging on too good, because there just aren’t many ways to save a ship in this game. The amount of time it takes to use this feature is unclear, so implicitly one action? Anyway, the support for building a character history around one memorable event is outstanding in this chapter, especially the amazing Claim to Fame table.

Note that some of the maps are not oriented with north at the top, and the two main maps are oriented in opposite directions. This has caused some confusion among other readers.

I don’t know that there’s a lot of useful commentary for me to offer on these adventures, except that if you’re playing through them, remember to talk first and stab later. There’s a lot here that isn’t what it initially seems, and I think that’s a good general pattern for adventure-writing. It seems to me that the town of Saltmarsh and environs support a hexcrawl/saltcrawl take on the region, with the adventures initially filling in just… whenever the PCs get there. Later on, you’d want to take a more directed approach, as the threats become clearer and most of the surrounding area has been explored, to one degree or another.

The maps I see as I skim through the adventures look great, and I see several set-piece encounters with interesting quirks and rules. I like the change of speed that they represent. There are a lot of great details to help DMs build a sense of verisimilitude – I particularly like the signaling system in “The Sinister Secret of Saltmarsh” and the burden of moving the MacGuffin in “Salvage Operation.”

Appendix A: Of Ships and the Sea

Most of what we saw in the UA article of the same name seems to still be in place – the same component/battle station format for ships and naval combat. Adding in grid maps for each ship type (galley, keelboat, longship, rowboat, sailing ship, and warship) and area descriptions for average vessels of those types is awesome.

The system for officers and crew are likewise recognizable from the UA text. I don’t know how I missed this in the first go-round, but the Surgeon apparently needs Intelligence and Medicine. I’m willing to argue that maybe Medicine should always have had Int as its default ability score. It’s a departure from the normal pairing – so it isn’t what you’d normally build toward in the character creation process. Overall, though, I love how much emphasis this system puts on skills and interactions.

Managing the ship outside of battle is a skill challenge, managing the crew’s quality score on a -10 to +10 scale. This is stuff I loved in the UA release, and that hasn’t changed. Quality is a contributing modifier and a likely cost when the ship encounters hazards and all sorts of misadventures. It’s not hard to imagine how a series of unlucky rolls could put the PCs on the wrong end of a mutiny. I like that various significant failures are possible without automatically going to catastrophic failure. Master and Commander is fairly well in reach here.

Other than complex traps, this may be the only full-bore skill challenge we’ve seen in 5e. On the downside, this is pages and pages of tables and text. On the upside, there’s a huge variety of stories available here, contained in various table and check results. This is easily the beating heart of an exploration game, and it doesn’t look like it would get repetitive in a hurry.

My advice, as with many things like this, is for DMs and players to apply their energy to keeping the focus on characterization and narrative. It would be only too easy for the system to become a dry and rote series of die rolls, much like combat can become another tedious series of die rolls. Try a different tack: slow down, describe things (especially the action), and have conversations with the NPC crewmembers that reveal their personalities.

The first big new content here is magic ship upgrades (you can’t properly call them items), which cost a huge pile of money to add to the ship in addition to the cost of the magic item itself. There are six hull upgrades, six movement upgrades, four weapon upgrades, four figurehead upgrades, and three miscellaneous upgrades. They’re cool, frequently creepy, and each sufficient to be the distinguishing Cool Thing of a recurring antagonist’s ship.

I’m not sure why Ocean Environs is as separate from Hazards as it is, but there’s a great variety of magical and mundane ocean stuff to run into. The only one that strikes me oddly is the idea that magical storms each belong to one of the schools of magic, rather than an energy type. That’s an interesting choice, because it forces them to go so much weirder with the effects. The statement that it makes in the story, about why these storms happen – the answers that come to mind for me are pretty wild.

Encounters at Sea is yet another content-generation engine. You and one (1) set of polyhedral dice can make all kinds of content with this bad boy, all the way down to naming the crew. The variety is frankly incredible. There’s still a lot of connective tissue of story needed here, but the first idea that comes into your mind is probably fine since you won’t see a lot of repeated results over time.

Oh, then there’s Underwater Locations. This goes into more detail; they’re basically collections of short adventures. It should do a lot to provide variety and interstitial material between the bigger adventures in this book.

I’m not testing this chapter, but it reads well. Oh, I’m sure that tomorrow I’ll see someone ranting about how they could have delivered better [citation needed] content in a quarter as much space. I just… don’t care? This is clear and understandable.

Appendices B and C: Magic Items and Monsters

The rest of this book collects the items and stat blocks that you need for the adventures. Some of them are reprints from other books, like the bard and the bodak (to make the book usable on its own), but the great majority is new and excellent. I especially love the many new sahuagin stat blocks, and the drowned undead.

I’m incredibly impressed with this book. Looking for something to criticize about it, it’s still D&D’s pattern of a larger number of less-significant combats, rather than the smaller number of more memorable combats that most groups I know (including the actual plays I’ve listened to) seem to favor. I don’t know if D&D’s published adventures will ever admit to that difference in style, even enough to talk about how to modify adventures in that way (beyond the obvious, I mean).

Yeah, I don’t think that’s a fair criticism either.

As a trend-line through other recent works, Ghosts of Saltmarsh tells me that the team saw how well Dragon Heist worked as a setting and adventure full of social conflict, and they kept on improving it. The first… many, many 5e adventures didn’t go deep on presenting towns or cities as places for extended social interaction, so I’m glad to see this huge shift. I am so excited for Baldur’s Gate!

In summary: this is one of the best adventure books WotC has released, and their setting presentation is the strongest 5e has yet seen.