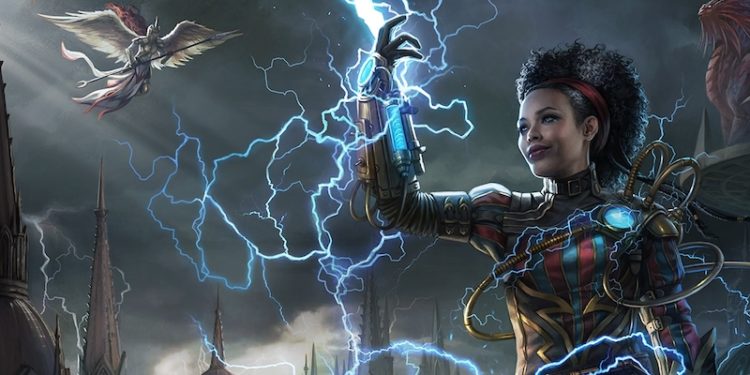 Today on November 20th, 2018, Wizards of the Coast’s newest offering will be available everywhere. The Guildmasters’ Guide to Ravnica opens up the world of Magic: The Gathering for your D&D 5th edition game. The campaign book was released earlier to select game stores and online content has been made available through D&D Beyond, Roll20 & Fantasy Grounds earlier. I’ve had the chance to explore through this new campaign sourcebook on D&D Beyond since it’s release and I really have enjoyed reading through the online book but I’m old school. I like physical books, so I’m happy to have a physical hardcopy in my hands.

I will start off by saying that the little Magic: The Gathering symbol on the cover and spine make this more of a reality. I know I’ve seen lots of homebrew mashups in the past, and I’ve seen some inklings that this D&D and Magic: The Gathering crossover was coming in the future, but it is great to finally see this completed and in my hands. I didn’t really know how they would do this well, and now that the book is here, it all makes sense.

I’ve been playing D&D since around 1980 as a kid, and I started playing Magic: The Gathering while I was in the Navy back in 1996 a few years after it came out. I will admit I don’t know a lot of the lore or cannon from MAGIC, I know about the colors and typically what to expect from building certain decks. Sometimes the card writeups & art will catch my eye and I’ll invest a bit in learning more, but typically I’m looking at mana color and game mechanics. But looking through the art and descriptions in the new Ravnica book, I can see all the M:TG influences and connect to what I have played on the table with my magic cards with friends. I am glad to have this campaign book to put it all into a form that I will be able to learn more about it. Because the best way to learn & explore is to play D&D! 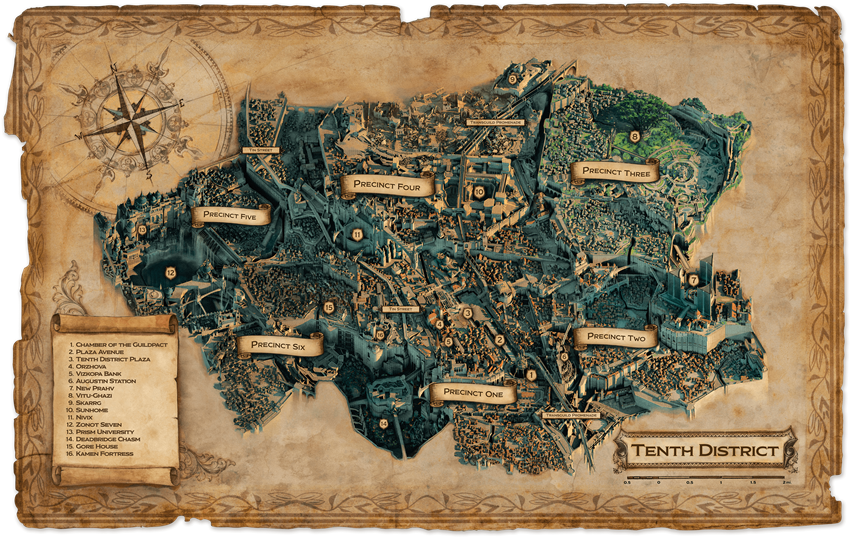 As you already know, Ravnica origins come from Magic: The Gathering. And those origins are in eight-card sets.  There are three from 2005 to 2006; Ravnica: City of Guilds, Guildpact, and Dissension. Three from 2012 to 2013; Return to Ravnica, Gatecrash, and Dragon’s Maze. And two new ones in 2018, 2019; Guilds of Ravnica and Ravnica Allegiance.

Ravnica happens to be one of the most popular Magic: The Gathering settings among players because of the ten guilds described in Ravnica support typical deck building methods.

What is Guildmasters’ Guide the Ravnica? 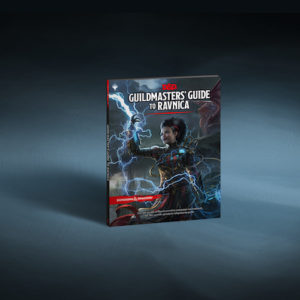 Very simply, it is a new D&D campaign sourcebook. A NEW WORLD!

It has six chapters to help you build characters and adventures. Chapter 1 is for building characters. Chapter 2 guides the character building further with details on Guilds. Chapter 3 takes over to describe the City of Ravnica and the ten district’s six precincts. Chapter 4 is all of the Dungeons Master and expands on what can be found in the Dungeon Master’s Guide. Chapter 5  continues with Ravnica treasures including details and rules for new magic items. Chapter 6 wraps up the book with monsters and creatures found on Magic: The Gathering cards along with other guild details.

This is one of the worlds that is built upon the lore that whispers behind the card play and game engine of Magic: The Gathering. Ravnica is an entire plane that is dominated by the ten guilds (see image below.) But this is still a full-on campaign D&D guide that you can build characters, wield magic weapons and fight deadly beasts. The Dungeon Master has guides on filling dungeons with treasures and creating intricate adventures with amazing big bads. There is history here that I am sure will be built upon even further as we play and explore in this giant city of Ravnica.

There is a lot to get excited about. There are a lot of “official” campaign worlds for D&D. Guildmasters’ Guide to Ravnica is is a full complete new campaign book. A whole new world (actually a very large city) for D&D that takes us fully outside of previous editions like what we have seen with the Forgotten Realms, Barovia or Ebberon that are available for 5th edition.

I know that some of you were hoping for Greyhawk or Darksun or Dragonlance or Planescape or Spelljammer or whatever. You were hoping for anyone of those because they are familiar. Maybe you want someone to do the heavy lifting for you and convert things over to 5th edition, or you just want to see your favorite setting reprinted in a new form because you love it. I can understand I love those too (especially Greyhawk), but I am actually glad for something new. And I am sure that there will be a gatecrashing of new M:TG players because D&D has broken out and decided to take on a new world that they love.

Here are some details that you probably already saw on a retail website. But here is the info right here:

Explore a worldwide cityscape filled to the brim with adventure and intrigue in this campaign setting for the world’s greatest roleplaying game.

A perpetual haze of dreary rain hangs over the spires of Ravnica. Bundled against the weather, the cosmopolitan citizens in all their fantastic diversity go about their daily business in bustling markets and shadowy back alleys. Through it all, ten guilds—crime syndicates, scientific institutions, church hierarchies, military forces, judicial courts, buzzing swarms, and rampaging gangs—vie for power, wealth, and influence.

These guilds are the foundation of power on Ravnica. They have existed for millennia, and each one has its own identity and civic function, its own diverse collection of races and creatures, and its own distinct subculture. Their history is a web of wars, intrigue, and political machinations as they have vied for control of the plane.

Where can I buy it?

If you don’t already have a copy you can check this link to find your local game store, or if that option is for you, you should try an online at retailers like Amazon. (AMAZON!!!)

You can also find Guildmasters’ Guide to Ravnica available via Fantasy Grounds, Steam, Roll20, and at D&D Beyond.

Presentation10
Lore10
Character Options10
Monsters10
Campaign Guide10
10Overall Score
Guildmasters' Guide to Ravnica provides a ton of lore and 43 new/reimagined monsters (I hope I counted those correctly). The character options fit well with the setting and there are several new offerings that are really exciting to me like the Loxodon). I believe that the book is an excellent resource and is a must buy for all the D&D players. My hope is that it will excite new players from Magic: The Gathering to take a look at D&D and come onboard. :)
TagsD&D 5emtgRavnica
Previous Article

The power of cliffhangers