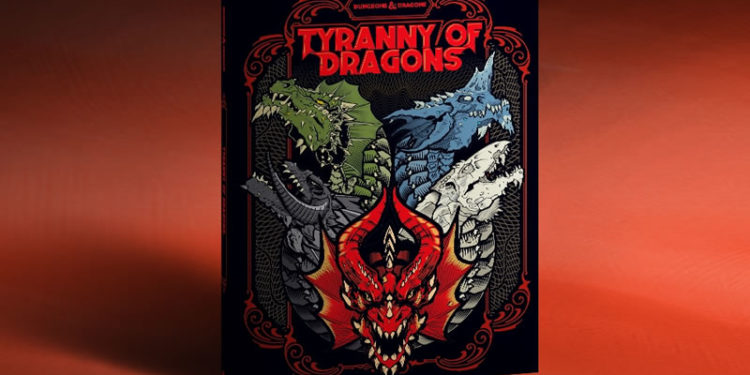 Hoard of the Dragon Queen and The Rise of Tiamat were released way back in 2014 as fifth edition launched. It’s hard to believe it has already been five years. Tribality only started in October 2014, so we didn’t even publish a review of HotDQ. Today, Wizards of the Coast is taking the opportunity to re-release the epic Tyranny of Dragons storyline as a single special volume. This book has a new cover by Hydro74, errata, a reworked opening chapter, and some concept art. The overall reception of those two books was a bit bumpy and many fans will be happy to see this new release.

I received a review copy last week and had a chance to look over the book in detail. Here’s a mini review:

Back in 2014, Hoard of the Dragon Queen had a single page introduction before jumping right into the first chapter of the campaign. Tyranny of Dragons isn’t in such a hurry to get started and we are provided a 17 page overview of the campaign, its villains and allies, the Forgotten Realms, and more. While much of this content was already found in The Rise of Tiamat, having at the start is a good effort in reoganization. This expanded introduction provides a solid base for DMs to get started and it’s also a good primer on running campaigns in the Realms. What you won’t see in this expanded first chapter are some of the great additions seen in other adventures such as adventure trees, dramatis personae, and pronunciation guides – all of which I find useful and could have helped pad the page count a bit. Overall, the expanded introduction is a solid improvement.

Having the book as a single volume is how it should have been originally (launches are tough and they had to get an adventure out the door in the fall of 2014 along with the PHB). This opening chapter ties to the two books together as well. The book clocks in at only 224 with the extra content, which shows you how short the two original hardcover books were in comparison to latest releases which generally come in around 256 pages. While the book is a little shorter than most super adventures, it still uses the thicker paper we saw in Hoard of the Dragon Queen and The Rise of Tiamat, so it is actually wider than the other 5e books on my shelf. But enought about page count and paper thickness… let’s talk cover. The five heads of Tiamat looks even better when you are holding the book. On the back you’ll find the symbol of tiamat. This is my favorite special edition cover so far, and that is a tough contest – with so many great ones already out there.

Tyranny of Dragons is the same sotryline/super adventure/campaign as in the original two books. A group of heroes is called upon to stop a cult from freeing Tiamat. Dragons make for awesome foes and even friends, and this adventure is full of dragons (bad and good), half-dragons, dragon masks, and dragon cultists. The adventure is still split into two parts, with each half keeping the original Hoard of the Dragon Queen and The Rise of Tiamat naming. Some may find it linear and require some reworking for their table, but the campaign rewards players and DMs with an epic showdown for sticking through to the end. The book also works well as a sourcebook to steal from for your own adventures, with many of the chapters modular enough to lift out into your own story. Overall, it is a solid adventure that received mixed reviews back in 2014 and is only improved with the addition of the expanded introduction and errata.

The appendices are relatively unchanged other than the addition of the concept artwork, but having the monsters and magic items for both books merged together is a nice improvement. A nice addition to the appendices that’s missing would be some notes on running the adventure in other settings such as Greyhawk or Dragonlance, as seen with some of the other 5e storylines. The appendices finish off with a substantial 20+ pages of great looking concept art. I love concept art, so this is a winner for me and something I’ll take in any book (if they can afford the page count), like we just saw in Baldur’s Gate: Descent into Avernus.

Should I Buy It?

If you already own the previous books and don’t collect special covers, you might want to save your money for other upcoming books like Eberron: Rising from the Last War. If you missed the original release and are interested in running a dragon adventure using a published or as a sourcebook for your own story, I’d recommend this book.

Visit the official product page for complete details of just read it below.

Avert the cataclysmic return of Tiamat in this adventure for the world’s greatest roleplaying game.

In an audacious bid for power, the Cult of the Dragon leads the charge in an unholy campaign to bring Tiamat back to Faerûn. Alongside their dragon allies and the Red Wizards of Thay, they sweep from town to town, laying waste to all those who oppose them and gathering a hoard of riches for their dread queen.

The threat of annihilation has become so dire that groups as disparate as the Harpers and Zhentarim are banding together to fight the cult. The heroes must succeed, or Faerûn will succumb to draconic tyranny. In the end, the world will never be the same. 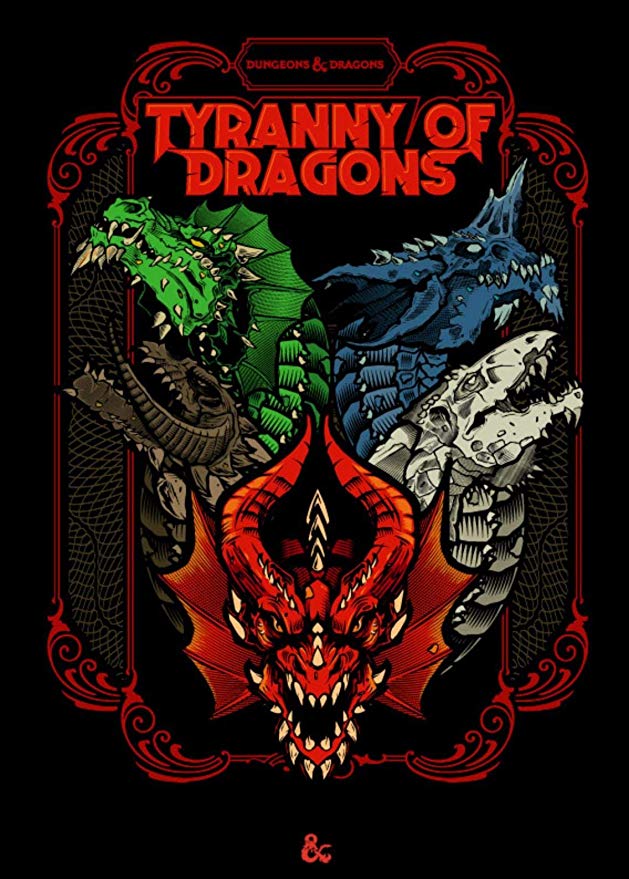 Rakshasa: Advice on how to run one