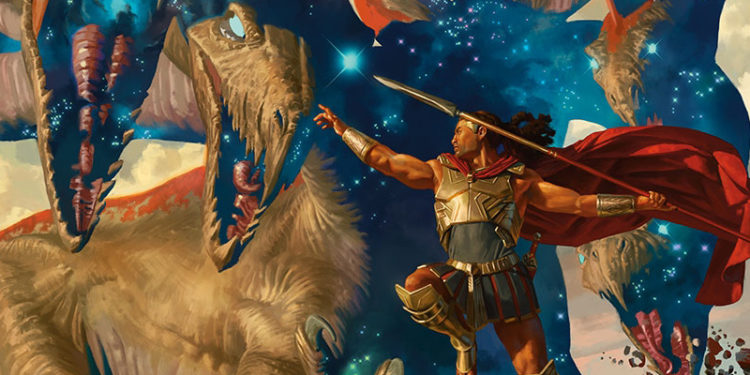 Okay, yes, I could have written this way back when its text dropped on D&D Beyond, but as it turns out, my brain just does not want to work through the DDB text for breakdowns. DDB is great – I like it for literally everything but this. Anyway, it’s a MOoT point now.

As usual, I’m going pretty quick through the setting material. I’ve seen some great commentary on how Theros’s overtly vague approach to history and lore makes it ideal for easy uptake by players and DMs. I’m the kind of player and DM who loves learning and sharing lore, so it’s a marginally harder sell for me, but the setting wants you to shift from lore to recounting myths at the table. I don’t really know Glorantha at all, but this is akin to what I assume it’s like as an outsider. And, of course, the comparison of the gods to 13th Age icons explains itself.

So how do you create a Mythic Hero™? I like that the text starts with building a mythic personality before we get into the mechanical parts of the answer. We can sum up their answer as go big or go home. Between this and the Supernatural Gifts to follow, I don’t think it’s uncharitable to find a lot of the spirit of 13th Age’s One Unique Thing. Not that it’s a ripoff by any stretch of the imagination – this addresses the idea in a way utterly unlike the anti-mechanical approach 13th Age takes.

The supernatural gifts are fascinating, so I’m going to take them one at a time. The idea is to accept straight out that Theran mythic heroes have more going on than PCs of other settings. It’s only necessary because we, the audience, can’t really ignore the rest of D&D as context.

This makes you a warforged version of whatever you otherwise are. Presumably you’d also use it for, say, Galatea – regardless of how the d6 table of quirks revolves around the metalworking god Purphoros. In any case, it accomplishes that by grabbing the Constructed Resilience and Sentry’s Rest features of the warforged.

On the surface this seems a bit… universal? I mean, you’re a PC, fell deeds awake, now for wrath, now for ruin, and the world’s ending, et cetera, right? What it really means is “really extra unlikely to die, even more unlikely than in core 5e rules.” Defy Death grants advantage on death saves, while Hard to Kill lets you fall to 1 hit point rather than 0, once per long rest. The exciting part of the supernatural gift is that you get an extra-cool story goal, where other many others get an extra-cool origin.

This one is… a little bit of a rejection of the setting’s conceits, opting out of the whole Piety system (on which more later). On the other hand, maybe that makes it playing on hard mode, and it is noted as being a common stance among some Theran peoples. Since you don’t gain a feature progression from Piety, you gain rather more features from this supernatural gift.

Magic and power come from the gods, and you negate those things. Choosing dispel magic over counterspell is as much of a surprise as we see here. No objections from me.

I love the sidebar on Heroic Feats, nudging players to dig deeper into narrative elements around their feats.

This is a simple supernatural gift, for people who don’t want to shape their whole story around their gift. You’re pretty much a tower of iron will unto yourself: Psychic Shield grants resistance to psychic damage, and Sphinx’s Shroud grants immunity to thought-reading, and helps you resist Insight checks. The Inscrutable quirks are very clever and fun, because several of them alter your speech patterns at the table.

Have you ever wanted to be Patroklos? (One of the characters in my Birthright campaign did, or at least he named his character that.) After all, Achilles is sort of the worst… and anyway, we’ll be getting to his supernatural gift in a minute. Big Sidekick Energy grants:

This gets the job done in two simple features; I might think about stepping Companion’s Protection up to once per short rest instead, since it’s moving rather than negating a cost. Anyway, another option if you’re feeling like keeping your supernatural gift lighter-touch.

What if you were even weirder? A demigod waiting to happen, or a full-on supernatural being? Oh, it turns out that this is where the designers would place Galatea, judging by the origin table.

The Origins and Quirks tables are very cool and weird, and it sounds like a great PC option to me. Even more than that, it gives me ideas for introducing an NPC with any combination of these Origins and Quirks into another campaign setting, to give PCs a whole lot of strangeness to wonder about and potentially investigate, maybe as an inroad to learning about big cosmic mysteries.

You also have an Oracle Curse, a d8 table of flaws that simultaneously create hurdles to being a PC Oracle (helpful for telling stories around a character with access to vast cosmic knowledge), and touches on Cassandra and other oracles of Greek myth. Oh, and a nod to Raistlin, sort of. Anyway, I like what I see here, other than the note about once-per-day ritual being a little odd.

If you want a bit of a leg up in the Piety game, look here.

I feel like it’s going to feel a bit thin on benefits as you advance, compared to other supernatural gifts. I think the lesson here is that, much like Heroic Chronicle stuff in Explorer’s Guide to Wildemount, if you’re super concerned with all characters being precisely balanced at start of play, Mythic Odysseys of Theros may not be for you.

You’re Achilles. Maybe Heracles. Or maybe someone a little brighter than either of those two, but still very hard to injure. The benefit here is Unscarred Resilience, which is the same as a goliath’s Stone’s Endurance, negating 1d12 + Con modifier damage, once per short or long rest. (The goliath feature is also once per short or long.)

This is definitely a potent ability, and should add up to an enormous amount of avoided damage over the course of your career as long as you remember to use it.

There are six significant PC races in Theros: humans, centaurs, leonine, minotaurs, satyrs, and tritons. Humans are bog-standard, and I don’t like that any more here than I like it in the Player’s Handbook. This isn’t a complaint that is going to get anywhere, but I haven’t liked it at any point. Moving on.

I’m guessing this will be one of the last official releases to include Ability Score Increases or Alignments for races. Centaurs are cool, though here as with a bunch of the races, it’s not clear that they have any cultural acceptance of leaving the community to live among other races, or to go adventuring. That’s… not ideal. Sometimes you want to be able to talk to one of your own people without the whole encounter being about how you’re a renegade, you know?

There are two main ethnicities of centaur, which aren’t separated into subraces.

My issue with this is that it has so little to offer many types of spellcasters. Playable races that are… let’s say “previously” monstrous… tend to spend all of their allowance for Cool Features on the race’s physique, which tends to benefit weapon-wielding characters pretty exclusively. Sensory features, damage resistances, and additional skill proficiencies, on the other hand, benefit everyone about equally, or close enough to be safely ignored.

Lion people! Got it. Their writeup here emphasizes not just the pride of the pride, but so much wrath. They get a big “make sure you’re not being a jerk at the table, please” warning from me.

These are fairly well-rounded – claws are an emergency weapon for everyone but monks (go go damage scaling!), though I do feel bad for rogues, since they can’t Sneak Attack with it. (Letting rogues Sneak Attack with slashing/piercing natural weapons, and apply Dex to most of them, won’t break the game or the fiction, y’all.)

I like tauren in World of Warcraft (me and probably everyone ever), so it would be hard for me not to like minotaurs.

Imposing Presence is the only feature that does anything for you if you’re not a Strength-based melee combatant. More so than a lot of races, here I’m invested in wishing there were alternate mechanics that were more friendly to clerics, druids, or sorcerers.

Once again, I don’t really need to explain this race to you, but you do need to know that the art here is freaking amazing. I’m surprised that the girl satyr on the right side isn’t throwing the horns. (Editor’s note: I am as disappointed in this joke as you are.)

Satyrs have a whole lot to offer a wide variety of character types, because magic. resistance. Other than that (Mrs. Lincoln), they’re inoffensive. Also, their d8 table of Satyr Eccentricities is more fun than “fun for the player, annoying for everyone else.”

Bringing up the rear on races, we have tritons. Right off the bat, I like that they’re an amphibious race that takes full advantage of that fact, some of them living in poleis on the surface. It’s striking, how rare and important aquatic people, but with feet is.

This is a good well-rounded set of features. It’s interesting to see the mild power creep of Control Air and Water, compared to the other spellcasting racial features that usually grant a cantrip, 1st-level spell, and 2nd-level spell. Within the context of Theros, it isn’t specialized toward any particular character class or playstyle, so triton characters might not seem like towering badasses – but it’s up to the player to make versatility matter.

Finally, wall of water – a close cousin of wind wall, but smaller in size, less flexible in shape, no way to deal damage, can be frozen and shattered, and less effective at keeping arrow fire at bay. In exchange, it has a much longer duration, it is difficult terrain (for that one space), and it weakens fire spells. It halves fire’s effectiveness rather than granting the target resistance, the way being underwater does, but implementing it that way is actually perfect – it means that this spell remains a useful defense against fire when you’re already underwater. A note – wind wall calls out that it blocks gaseous form, while wall of water doesn’t – but all bodies of water block gaseous form.

That’s going to be it for this article, since I’m already north of 3,000 words. Next time around, I think I might be able to finish the rest of the book, but no promises. I’m most excited about the new subclasses, since I have players using those in my 5e Birthright campaign (where they fit in perfectly). In addition to the subclasses, I want to cover the Piety progressions of each god, and at least touch on how much energy this book expends on helping DMs know what to do with this material. Then there are the Mythic monsters, and every part of that implementation deserves thorough discussion.