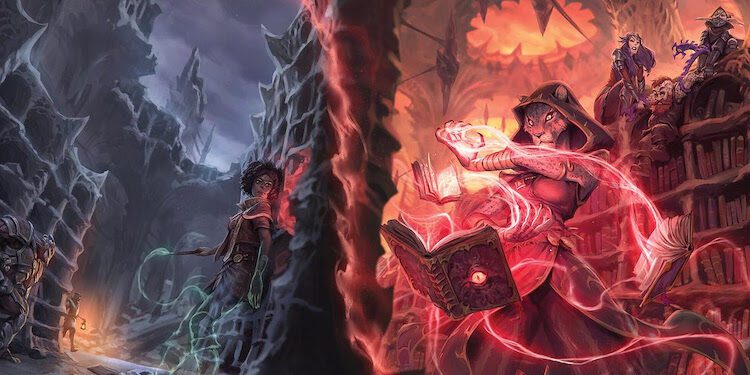 Chronicles of Eberron is a new fifth edition Dungeons & Dragons sourcebook from Eberron creator Keith Baker and designer Imogen Gingell. The book explores deep Eberron lore and provides advice for both players and DMs, along with new monsters, treasures, spells, and character options.

Chronicles of Eberron is available on the DMs Guild as a PDF and print-on-demand.

Join setting creator Keith Baker for another journey across the realms of Eberron, from the trackless void of the Astral Plane to the unknown depths of the Barren Sea. Chronicles of Eberron takes a deeper dive into Keith’s vision of Eberron, with expanded mechanics and detailed illustrations that bring the world to life.

This companion to Exploring Eberron contains lore and new options for players and Dungeon Masters alike. Play a Tairnadal champion with the Oath of Veneration, explore the mysteries of the Dark Six with the Aspiration Domain, or—if you dare—wield the forbidden magic of the Shadow. Learn more about the nobility of Khorvaire, the people of Riedra, and the stormsingers of Lorghalan. Face deadly new foes, from the daelkyr Avassh and Mordain the Fleshweaver to the infamous Grim Lords of Farlnen!

Chronicles of Eberron is a 207-page sourcebook for the fifth edition of Dungeons & Dragons. It will be available exclusively on DMsGuild.com in PDF and print on demand. Keith’s previous sourcebook—Exploring Eberron—is one of the best-selling books on the DMs Guild, and has been in the top ten since its 2020 release.  Like Exploring Eberron, this book is licensed third-party content produced by Keith Baker and his company Twogether Studios, and it is not directly associated with Wizards of the Coast. In addition to new lore and game mechanics, Chronicles of Eberron features original artwork from Rinehart Appiah, James Austin, Júlio Azevedo, Bad Moon Art Studio, Marco “MA4PS” Bernardini, Olie Boldador, Thomas “Dentifreaks” Bourdon, Carolina Cesario, Alex Coggon, Eldon Cowgur, GAOZ, Laura Hirsbrunner, Matthew Johnson, Tim Jones, Vincentius Matthew, Robert Moody, Styliani “Sylverryn” Papadaki, Cheto See, and Ari-Matti Toivonen.

Founded in 2014, Twogether Studios is the brainchild of award-winning designers Keith Baker and Jennifer Ellis. Twogether Studios focuses on creating unique games that bring people together around the table, emphasizing story and unique visual design. Creative partners include the band The Decemberists (Illimat) and the McElroy Family (The Adventure Zone: Bureau of Balance).

Welcome to Dragon Talk Is a Love-Letter ...