D&D Curse of Strahd Review – A Return to Ravenloft 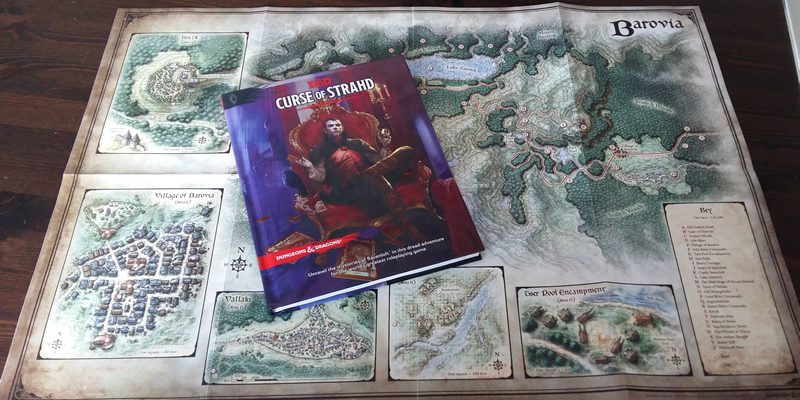 The new D&D adventure Curse of Strahd™ comes out on March 15. When I first received my copy from Wizards of the Coast, I turned to the back of the book right away to see the fold out map and then I flipped through page by page. My initial impressions were positive, the book looks great and the maps in the book and the foldout are superb. This book is 256 pages of gothic goodness full of dread, monsters, magic and more. It’s a really solid purchase that will provide hours and hours of gameplay, especially since it is designed to be re-playable. This book will give you everything you need to run CoS as a campaign or provide you with a valuable sourcebook for adding gothic horror elements to your own campaign.

What is Curse of Strahd? 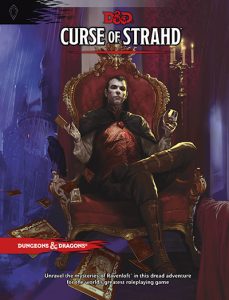 “Under raging storm clouds, the vampire Count Strahd von Zarovich stands silhouetted against the ancient walls of Castle Ravenloft. Rumbling thunder pounds the castle spires. The wind’s howling increases as he turns his gaze down toward the village of Barovia. Far below, yet not beyond his keen eyesight, a party of adventurers has just entered his domain. Strahd’s face forms the barest hint of a smile as his dark plan unfolds. He knew they were coming, and he knows why they came; all according to his plan. A lightning flash rips through the darkness, but Strahd is gone. Only the howling of the wind fills the midnight air. The master of Castle Ravenloft is having guests for dinner—and you are invited.”

For around US$50 (or less if you shop around), CoS is a great value that will take your players from level 1 to 10. It was designed to provide an open-ended experience (or sandbox style) that uses the tarokka card deck (deck not included) to randomize the placement of key adventure elements. The paper and binding of this 250+ page book matches the quality level of the other recent books and it will lie flat when opened. The artwork and Mike Schley cartography look terrific too, especially in the poster size foldout map.

The adventure incorporates material from the original Ravenloft adventure as well as new story content created by Tracy and Laura Hickman (the original creators of Ravenloft), plus Chris Perkins, Adam Lee, Richard Whitters, and Jeremy Crawford. 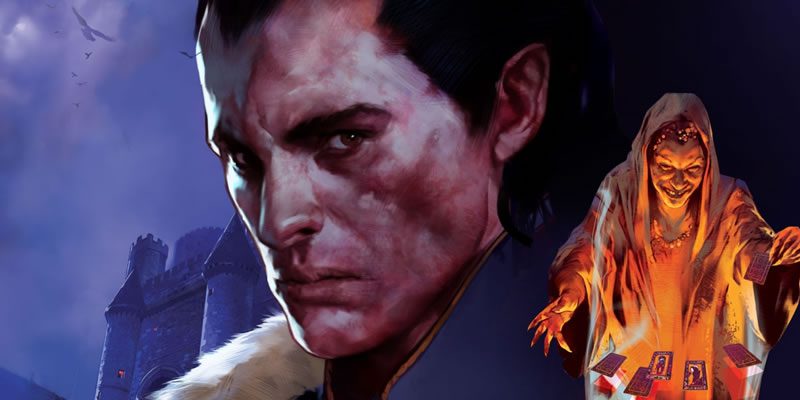 The Introduction gives a short overview of the adventure and provides Marks of Horror with tips on running a “chilling experience for you and your players”. The horror tips is one of my favorite parts of the book and would fit perfectly as a page in the Dungeon Master Guide.


Chapter 1: Into the Mists looks at the overall adventure including how to play Strahd and setting up the adventure using the tarokka deck to find out where Strahd, treasures and allies are located in Barovia. With tarokka cards unavailable for pre-launch I used the alternate rules for using common playing cards. I ran the reading a few times and had an entirely different combination each time. The tarokka cards really add an element of randomness that can create a new experience since this adventure is much more sandbox than linear. This section also provides 4 adventure hooks to pull your players through the mists and into Barovia.

Chapter 2: The Lands of Barovia gives an overview of the setting including how magic works there and a look at the Barovian and Vistani people who inhabit it. You’ll also find entries for a ton of random encounters and a top level look at places you’ll find traveling around Barovia.

Chapter 3: The Village of Barovia looks at this sad town’s locations and inhabitants providing plenty to explore and interact with including 7 detailed locations and 2 special events.

Chapter 5: The Town of Vallaki looks at the town which stands as a safehaven against the evil that surrounds it, providing details on ton of locations, NPCs and 4 special events.


The adventure then provides a group of detailed locations to explore, with most possibly being the location of one of the 3 treasures.

The Epilogue provides details for handling victory over or defeat by Strahd.

The book does not contain many new player options other than the Haunted One background and Gothic Trinkets table, both of which can be found in a free downloadable PDF.

The main CoS adventure begins at level 3, but there is a short adventure provided to help advance your players from level 1 to 3. DMs who just want to run the short Death House adventure which is available in a free downloadable PDF. Check out our detailed look at Death House by Mike, which includes a link to the adventure and a link to Mike’s notes he used to run the adventure for the in-store Curse of Strahd Adventurers League launch event.

Appendix C provides details of the three key treasures the Tome of Strahd, The Sunsword and Holy Symbol of Ravenkind, plus four other magic items.

Appendix D provides nearly 20 NPCs and monsters to throw at your players for CoS or to use in your own adventures, with lots of details and full stat blocks. The handouts are handwritten, so they are a little harder to read than the rest of the text in the book, but they do look good and are a nice touch. 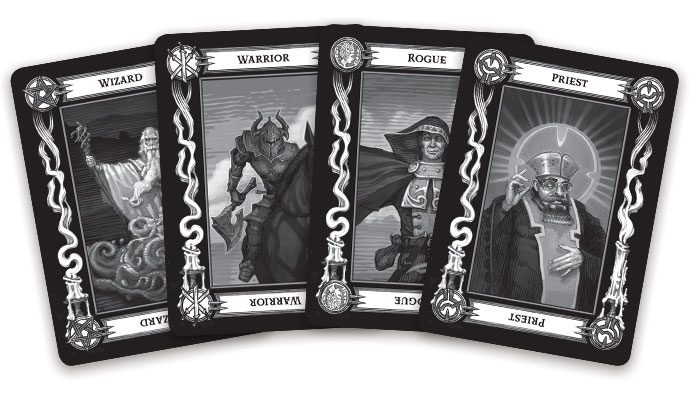 Appendix E provides details and images for each card in the tarokka deck. The deck is available separately as a 54-card deck by Gale Force Nine or you can use a standard deck of playing cards (like I did). Either way, the cards are meant to represent those used by the fortune-teller Madam Eva in the adventure to randomly determine key aspects of the adventure (such as locations of Stradh, treasure and allies). I really like the tarokka deck element, which makes every time you play the adventure unique for your group. I’d have to do the math, but the chance of getting the same combination more than once must be very, very small.

Appendix F provides handwritten handouts (see the open book image below) including an invitation, an excerpt from the Tome of Stradh, letters and journal entries. These are wee 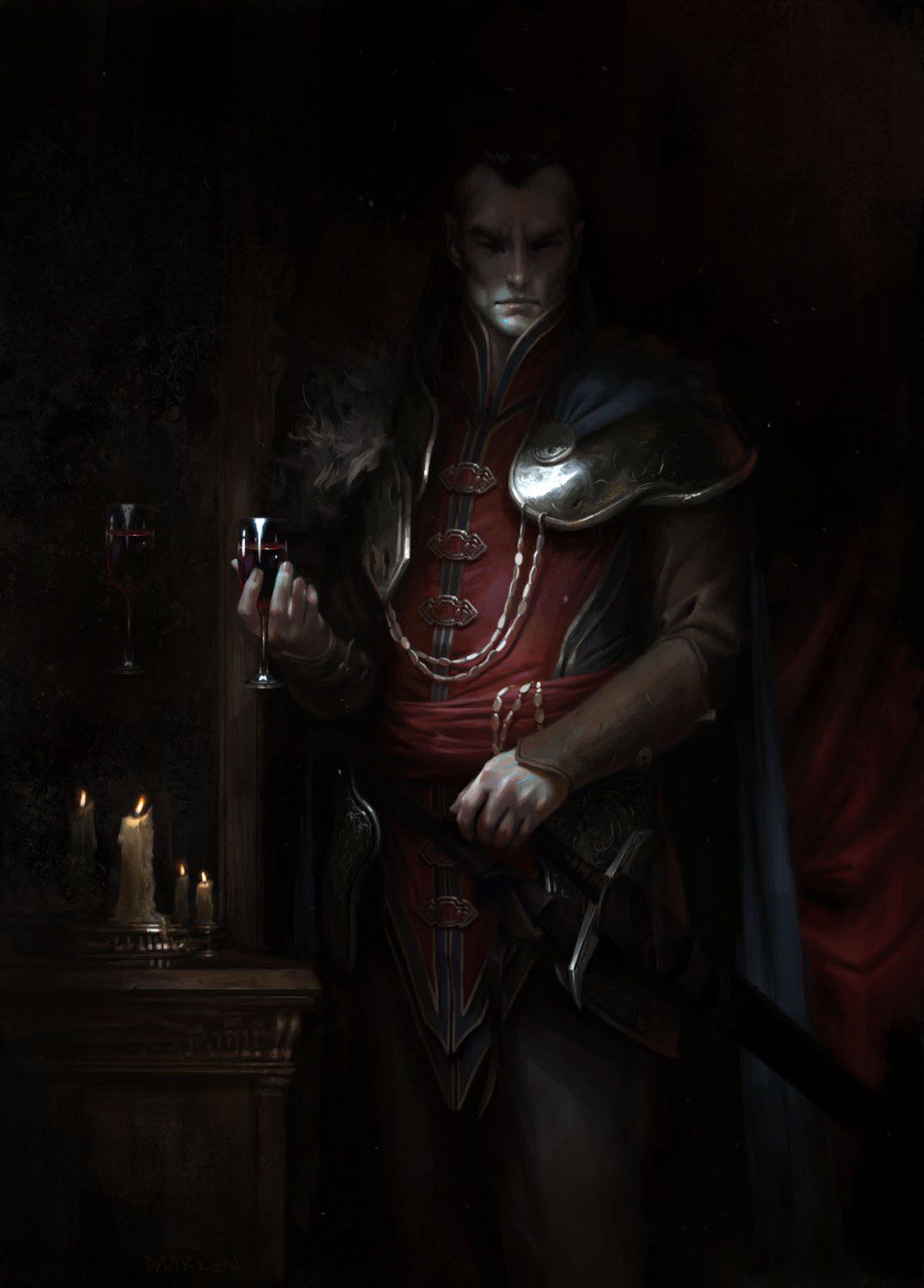 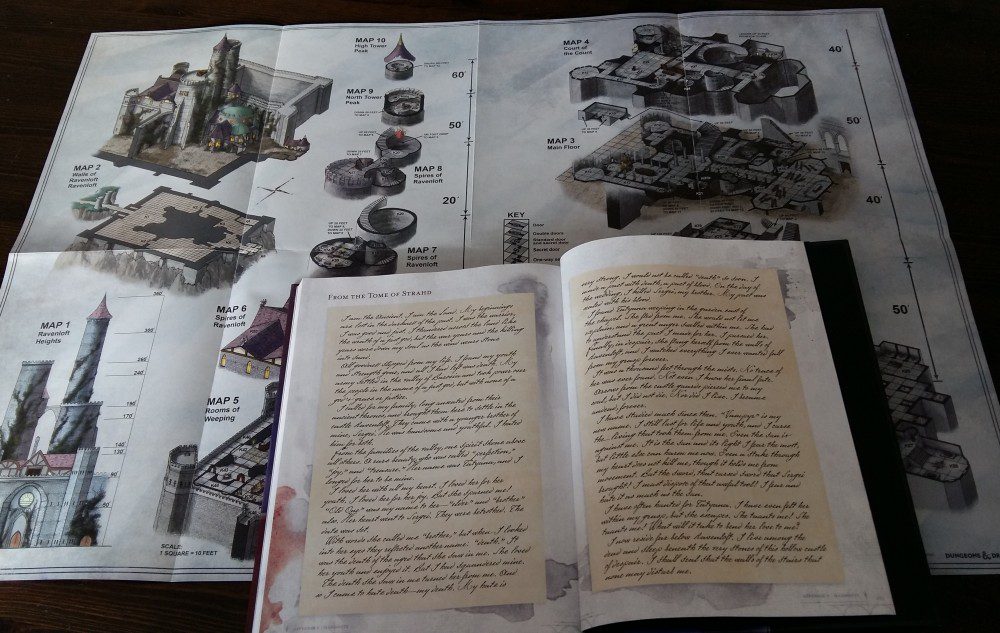 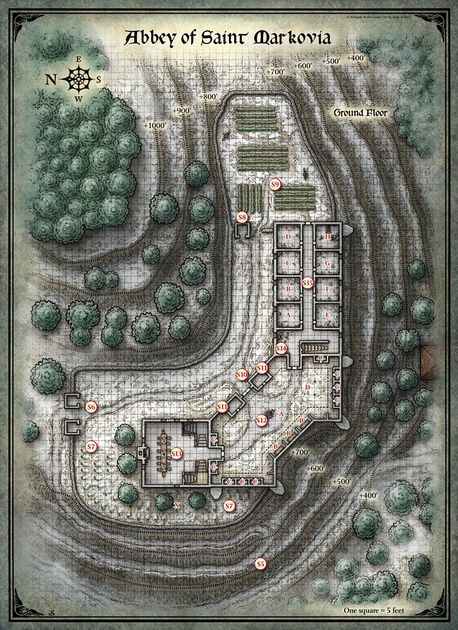 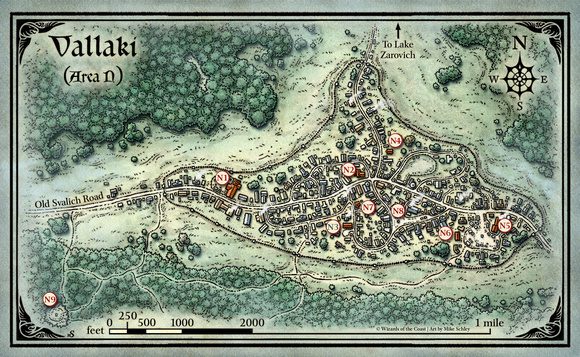 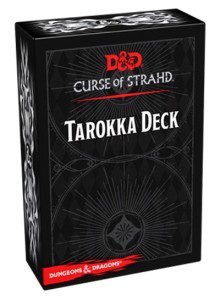 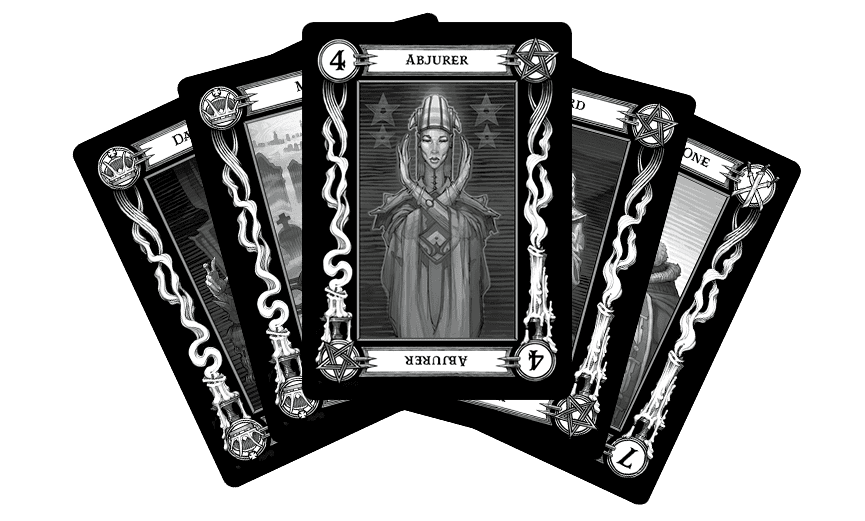 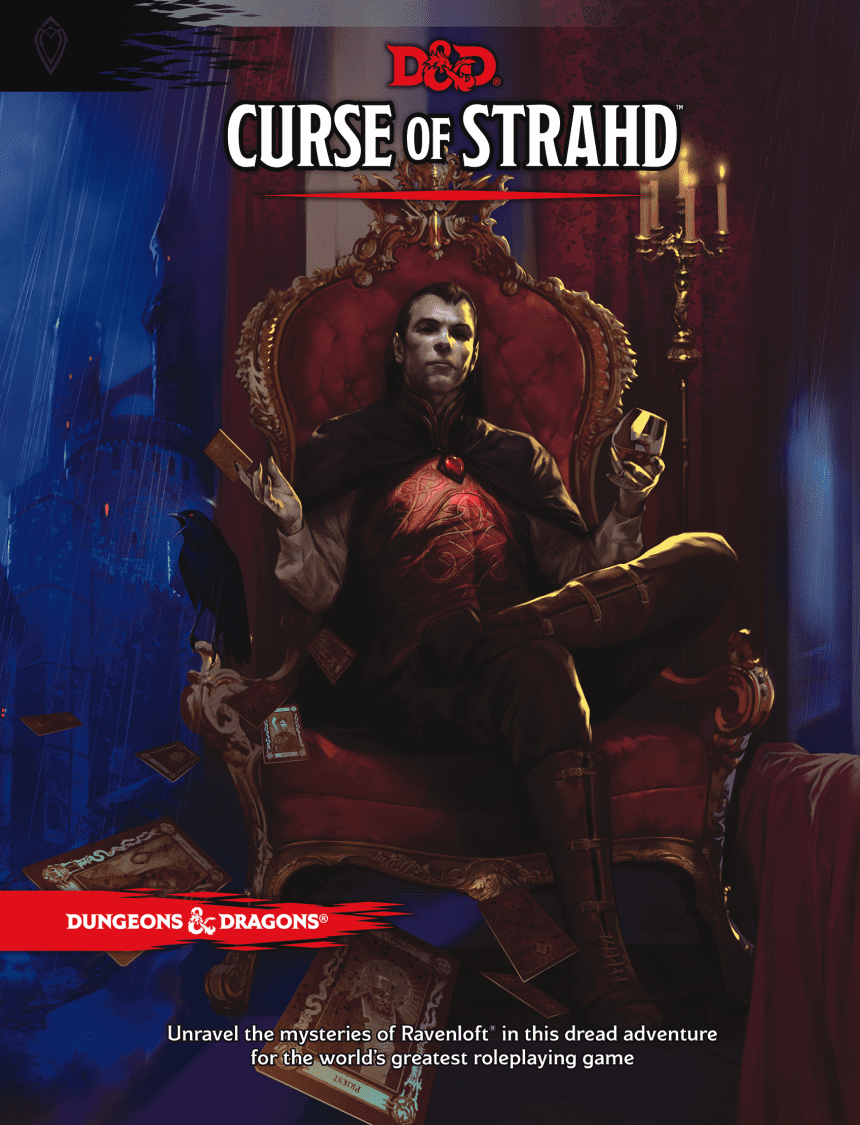 This book is full of maps placed right where you need them, with the adventure location. The pullout map has a full map of Barovia on one side and isometric maps of Castle Ravenloft on the other. Many of the maps appear on both the pullout and in the book. Mike Schley’s cartography look terrific, especially in the poster size foldout map.

Having had time to look over the book for a bit now, this review is based on reading the adventure and some limited playtesting. When I get a chance to play through the entire adventure with my players, it will be interesting to see if my positive opinion of this book changes, but I doubt it.

Curse of Strahd™ is a flexible campaign that balances the line between a plot driven and sandbox campaign, providing exploration, investigation, dungeon delving and more. The adventure incorporates material from the original Ravenloft adventure as well as new story content.

The book is high quality that matches the other core D&D 5th edition books, but adds in a touch of horror to the typical layout design and illustrations that we have seen in 5th edition. The foldout map is a really nice addition and it would have been nice to see a similar map included with the Sword Coast Adventurer’s Guide.

There are only a few potentially negative things I’ll mention about this adventure book:

Who Should Avoid It


Who Should Buy It?

Curse of Strahd is gothic horror done right, a great open-ended adventure and an excellent resource for your own horror adventures! Pick it up this week if you dare.

A Visit to the Shadowfell – Shadar-kai ...