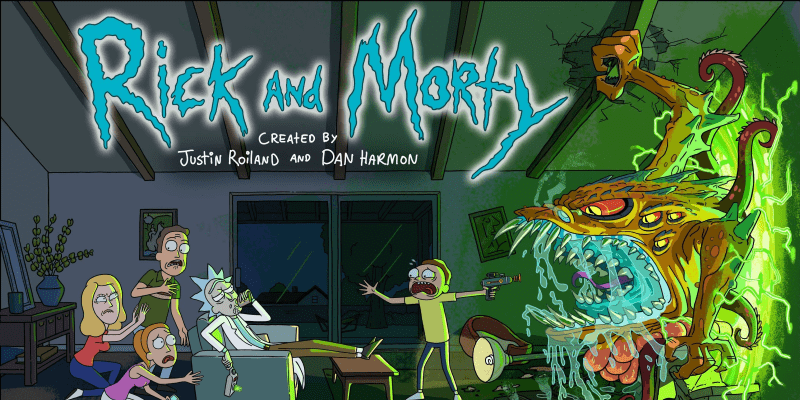 It’s no secret I love Rick & Morty. I’ve been on record for several years now stating it is the best and sharpest show on television. In my crushing need for the third season to finally arrive, I’ve been rewatching the show for the altogether-too-many-th time. As always, I spent a lot of time critically analyzing some of my favorite episodes (Rick Potion #9, Meeseeks and Destroy, Rixty Minutes, Morty Night Run, Auto Erotic Assimilation, Look Who’s Purging Now, among others…), and I came across the The Ricks Must Be Crazy. During the episode, I found myself thinking about the nature of conflict resolution, particularly as it applies to characters in tabletop gaming.

The episode is a masterclass in the nature of conflict, the morality in the choices made to resolve a conflict, and the compromises we make to achieve our goals. What’s more, this is the B-plot of the episode, conveyed in eight minutes or so. The most fascinating thing about this is how closely it parallels PC decision-making when it comes to resolving conflicts. As such, it’s a great chance to not only look at why they are making the decisions, but how, as a GM, you can change and re-prioritize conflicts to present interesting and new challenges to your players.

Like all great challenges, this situation arises from a seemingly simple goal statement. The episode begins with Rick, Morty, and Summer leaving a movie theater, having just seen a Ballfondlers movie. As Morty opines how great this dimension is, Rick says that every multiverse has its pros and cons. He spends a moment covering the negatives, such as the giant telekinetic spiders and the eleven 9/11s, but it has the best ice cream in the multiverse. Summer, Rick’s granddaughter and Morty’s sister, is left in the car while Rick and Morty go into the car’s battery to figure out why the car isn’t fully starting. Rick orders the car to “keep Summer safe.” 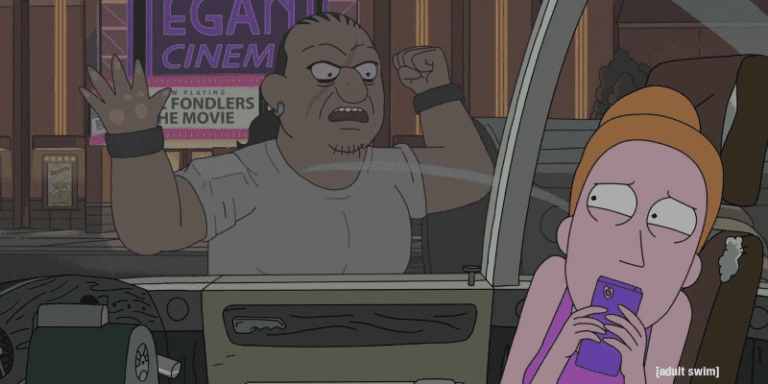 Shoot It in the Face

Almost immediately, a shoddily dressed man with tattoos comes over the car and begins speaking to Summer. Summer ignores the man, who becomes a little aggressive and hits the car. The car then intones, “Keep Summer safe,” and a laser grid shoots out. The laser grid briefly covers the man, who falls into bloody pieces. Summer begins to freak out, as you might imagine, and another man covers over. The man is very upset, and informs Summer that the man was “his daughter’s pediatrician.” The car again speaks “Keep Summer safe,” only this time Summer asks the car to not kill the man. A laser shoots out, but this time at the base of the man’s spine. The man is instantly paralyzed from the waist down, and when he crawls to the car, he is zapped again.

This fairly accurately portrays how players, in both tabletop and live-action games, tend to approach problem solving. It makes sense in a lot of ways. After all, most games spend a lot of time on combat, because combat is an easy way for players to feel active and influential. It’s also an area where outcomes are usually well defined. In social and exploration settings, there is a lot more discussion around the consensually-built narrative, and how the roll of a die should impact it. While I have certainly heard, and discussed, the idea that describing your attacks should have an impact on the resolution of the attack, it is a lot less hotly debated than the idea that solid roleplaying should impact the outcome of a social situation. 5e presents some options to resolve this (changing DCs, inspiration, advantage/disadvantage, etc.), but the fact remains it’s a lot less cut and dried. Ease of resolution means a lot. 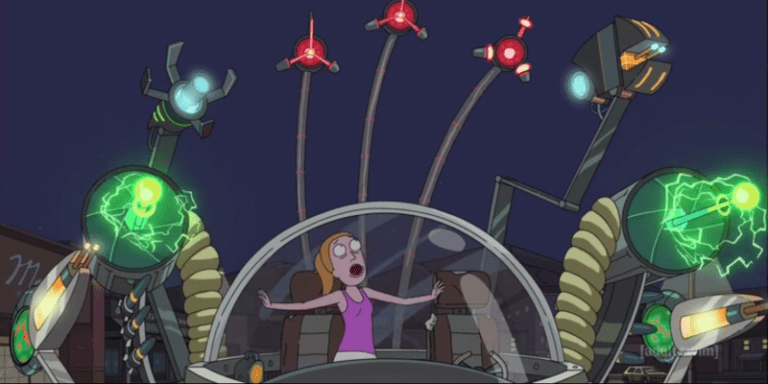 Shoot It in the Leg

Only slightly less easy than outright murder is subduing through force. There isn’t a lot of difference between outright lethal and non-lethal combat in 5e, as you decide on the final bit of damage whether or not it is lethal or not. Well, if you are making a melee attack, anyway. As the scene in Rick & Morty portrays, this has its own complications. The paralyzed man is left alive, informs the authorities, and his anguished cries remain behind to haunt Summer. In a nutshell, this is a great summary of the perils of combat without lethality. You have proof of your violence left behind. The authorities can very easily become involved, further complicating matters. You also have a mental reminder of your misdeeds, playing on your conscience. It definitely lacks the tidiness of murder, provided your crew are the trained murder-hobos we assume them to be… don’t actually murder people. 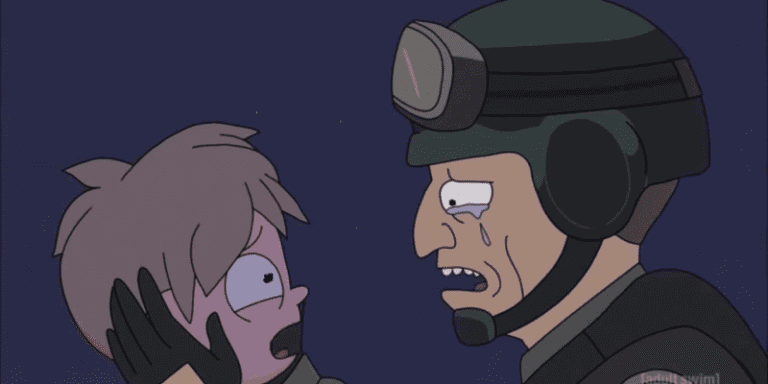 Shoot It in the Mind

After the police show up, Summer changes the constraints of the goal once again. Now, in the process of keeping her safe, no physical damage can be done. As the police circle the car and demand Summer’s surrender, the AI in the car scans through the psychological profiles of the officers. The car quickly identifies an officer to approach, and begins an emotional defense. The car deploys a box, from which a young child covered in goo arises. The child is a replica of the officer’s seven year old son, who tragically drowned in an accident the officer couldn’t prevent. As the officer openly weeps over the facsimile of his son, the figure melts in a horrific fashion. The car calmly says, “All of you have loved ones. All can be returned. All can be taken away. Step away from the car. Keep Summer safe.”

In the short span of twenty seconds, we are shown excellent shorthand for negotiation and manipulation. The car begins with a promise—it can grant eternal life and return your loved ones from the dead. This is akin to providing something of value in exchange for your demands being met. As screwed up as it is, it’s sort of a compromise or quid pro quo. I give you eternal life, you keep Summer safe. Of course, this message is undercut somewhat by the fact it also delivers a threat and plays upon the fear of the subject. This portion of the message is crystal clear—keep Summer safe, or your loved ones will be reduced to a pile of pink sludge. Intimidation has been an effective tactic for time untold for a good reason. Fear is a primal instinct, as is the desire to protect your tribe. Fear and rewards, two simple and time-honored negotiation tactics.

This also follows the parameters for player engagement pretty closely. With violence off the table, players turn to negotiation through rewards and fear. Fear would probably be the first call, as it doesn’t cost them anything to be terrors. In the case the rewards are provided by a benefactor… players still probably attempt fear and intimidation first, just to keep the rewards, if they can. Ok, that might be a little unfair. I’d like to think most players would take the kind option, particularly if it cost them nothing but being kind. Still, the players might be unwilling to be nice if there is existing history of any kind. Reason goes out the window when grudges come into the picture. 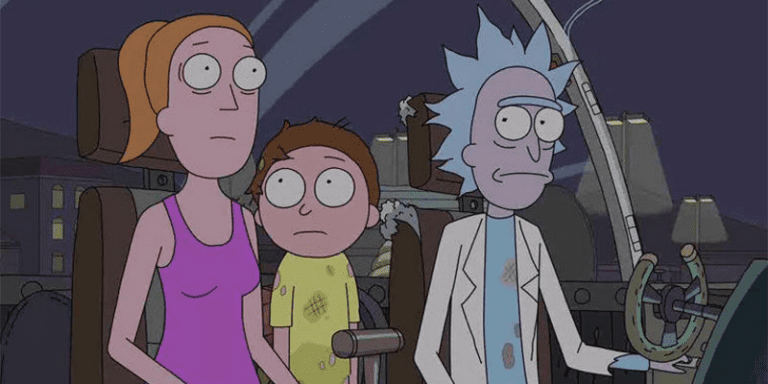 Get a Pardon for Shooting It

As the army is called in, the car laments the situation. The car feels constrained by all of the requirements Summer is imposing, and vocalizes it. As the car discusses having finalized a plan, the aforementioned giant spiders make their appearance. Instead of the spiders eating the soldiers, a government helicopter arrives and the president steps out. The president announces that the car has brokered peace between the giant telekinetic spiders and the humans. When asked about the car, the president simply responds, “Leave it alone. I mean, what did it really do, anyway? Kill a guy and paralyze his buddy? Not a bad trade for spider peace.” Just like that, the problem is solved and Summer is safe. Not only is Summer safe, a planetary war is stopped.

Funny enough, this happens in more games than not. The small little task spirals into a world-spanning quest that secures the fate of the world. It starts with something small, like bodyguard duty, and ends with the president and giant telekinetic spider armies. Always the way. Ok, probably not this specific outcome, but you get the drift. The spinning of events from simple to complex is a time-honored tradition in tabletop games. Hell, it’s part of the tiering structure of 5e. 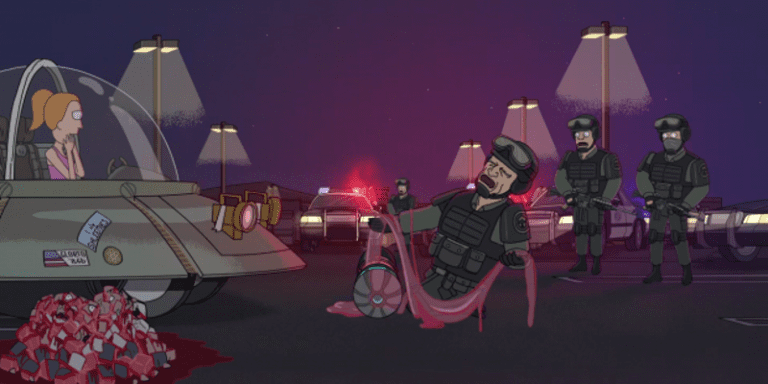 Instead of completely blocking avenues, pitching each option with various, lesser restrictions can go a long way. If the players want to pursue violence, attach it to something else. Maybe the only time the targets are accessible is during a public auction, or any sort of public event, really. You can also attach different penalties to each of the options. Violence is totally fine, but you can’t hide the violence from the other party. Instead, if violence is pursued, the trade negotiations will fall through. In that case, a new trade partner needs to be vetted before the matter can be considered closed. Partial successes and partial failures are woefully underutilized. It doesn’t have to go as far as pyrrhic victory, though it certainly could.

Before we consider the matter closed, the stinger for the episode is worth noting. The family goes to get some of the multiverse’s best ice cream, only to discover it is now filled with flies, to accommodate the spiders. The brokering of world peace destroyed one of the luxury economies the world previously possessed. This is a great final lesson for all involved. Actions can have far-reaching consequences. After all, we went from a simple bodyguard scenario to world peace. Not exactly a straight A-to-B endeavor. Even further from that, it kills the ice cream industry. This is a fantastic example of what I just discussed. The goal is completed, but at what cost? At what cost?

Ice cream for world peace…it’s a tough call. Well, if you are Rick Sanchez, at any rate.