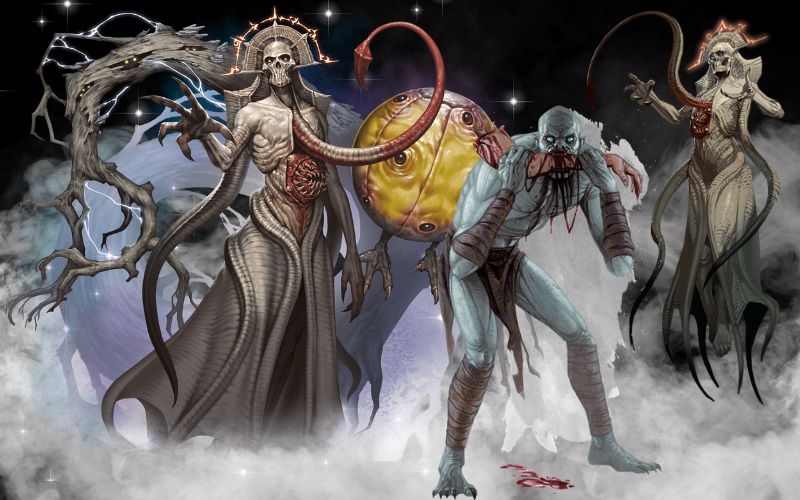 The Strongest Monsters in the D&D World

The world of Dungeons and Dragons is filled with fantastical creatures and amazing locations to explore. Not all of them are going to be friendly, though. A player will be shaking in their boots when they find themselves face to face with one of D&Ds iconic monsters.

Dungeons & Dragons 5th Edition has a system called a Challenge Rating. It’s how the designers and the rules rank monsters and encounters so that level 1 players don’t immediately find themselves face to face with a creature that could quickly kill the entire adventure party with a single glance.

The Beholder is one of the most iconic D&D monsters out there. It’s second only to dragons and that’s only because it’s in the name of the game.

The Beholder doesn’t have the highest CR on the list, but that doesn’t matter too much because Beholders are TROUBLE. They’re considered legendary creatures and get additional actions and typically carved a lair out for themselves where they hold every advantage.

Beholders are highly intelligent creatures that look like giant floating eyes with tentacles coming out of them. Each tentacled limb also has an additional eye that shoots a different magical effect.

A D&D party will have a lot of trouble dealing with these creatures. They can fly up into their lair out of melee range, can negate magic in front of them, turn their enemies to stone, charm them, or simply disintegrate them with their eye abilities.

It’s not something you’d want to go toe to … eye… with by yourself or unprepared.

A lich isn’t your average undead. A lich is a creature that’s unlocked the secrets of the dead and used them to turn themselves into an undead semi-immortal being.

The lich is an undead creature with a horrifying array of magic at its disposal. They also typically have an army of undead experiments, zombies, or animated skeletons at their disposal to ensure that even getting to the lich is difficult.

To make matters even worse, when you fight a Lich on their home turf, they usually have infused their lair with their undead magic. They can simply link their life force to another player’s and slowly drain their life away.

A lich is a hard fight for even a seasoned group of adventurers and it’s always best to go in well prepared.

A Dungeons and Dragons list wouldn’t be complete without mentioning Dragons. These majestic creatures aren’t rampaging beasts, either. They’re highly intelligent, ancient creatures, and in the Forgotten Realms setting of D&D, two dragons are the primary beings responsible for creating the entire world, Bahamut & Tiamat.

There are very few things as satisfying as leveling a character or party and coming face to face with one of the most intelligent and strongest creatures in all of the D&D universe.

When all the quests are done and when all the damsels have been saved, there’s only one creature left to slay.

The most anyone has ever done is drive it off until it reawakens. It’s bigger than a dragon and is one of the primordial creatures of D&D and even dragons would think twice before awakening one.

So, judging by the Challenge Rating, Kobolds shouldn’t be one of the strongest creatures in the D&D world. There’s one big difference, however, that makes them a dangerous threat to any of the 5e Classes in D&D.

The thing that makes them so dangerous is the “s” in Kobolds.

A single Kobold by itself is no threat at all. A level one character of any class would be able to single-handedly take out a Kobold. 5 Kobolds? Sure. 10 Kobolds? Maybe.

Kobolds rapidly reproduce and typically have tons of creatures in the lair. They’re also not stupid. They’re smart enough to use tactics, set traps, and they have the numbers to be dangerous to a party of any level.

There’s a famous story of a dungeon master named Tucker who didn’t know what to do with an advanced party of characters. They were able to fight every other monster on this list easily, but they always had trouble with Tucker’s Kobolds. The Kobolds would swarm the party, shoot from cover, lay deadly traps, and deploy advanced tactics against the party.

The idea of turning a relatively weak encounter into an advanced one was originally published in Dragon Magazine by Roger E. Moore. It tells the story of a maxed-out level 20 party getting ambushed on the way to the entrance of a dungeon. They lose all their equipment, donkeys, party followers, and only barely escape with the weapons they’re currently holding before jumping into the dungeon.

If you truly want the most dangerous creature in your D&D game, it’s not the biggest monster that’s the biggest threat, it’s the one with the numbers and intelligence to wipe out the party before you even get a chance to run away.