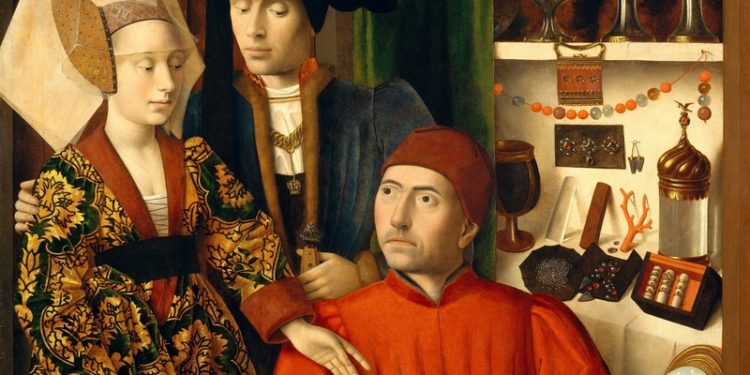 The guild artisan background is one of the oddball backgrounds to me. Nothing about it really speaks to the character’s future life of adventure, but maybe that’s what makes it so interesting. It gives you a full career before choosing to go off and slay dragons and uncover fantastic loot.

Let’s take a dive into potential backgrounds for each of the different classes in Dungeons & Dragons 5e.

A barbarian who is also a skilled artisan. It’s not as strange as it seems. You do have to modify the background somewhat, moving it away from the feudal social order that the guild artisan is at home in, and fitting it into a more scattered network of villages and tribes.

Barbarian clans need people making things and trades too. Perhaps you traveled with a merchant caravan, trading furs from the north for iron from the south. When choosing which profession to run your business with, things like masons, wagon-makers, weavers, woodcarvers, potters, smiths, brewers, leatherworkers, and cooks make great options.

You could even be the only alchemist in your tribe, having studied it from the tribal shaman.

The connections you have as part of your Guild Membership could be how you were introduced to civilized society, and they may form the core of your social network before meeting the other player characters. For a barbarian with the guild artisan background, consider how you became part of the guild and what made you leave your tribe and your professional responsibilities and become an adventurer.

A bard makes a natural guild artisan, adding to their already prodigious list of skills. A bard could have studied their craft alongside their music, or even as a fallback career. They excel in being great negotiators and benefit from the extra contacts gained by being a member of the guild.

Good professions for bards with the guild artisan background include alchemists, brewers, calligraphers or scribes, cooks, jewelers, painters, tinkers, and even glassblowers. Really, a bard could excel at any of the professions, but what would set them apart is their distinct panache for sales.

Here are some personality traits for your bard:

A cleric might seem to already have a profession, but for those clerics of gods whose domain is centered around crafting it makes a natural choice. A smith cleric of Moridun or Hephaistos, or an elven woodworker cleric of Elhonna.

Choose a profession that falls in line with your god’s domains. A cleric of a sea god may be a natural shipwright, perhaps coming to the faith through their work. Think about your connection between your craft and your faith.

Who inspired you to do both? Do you have a mentor in the guild that you turn to for advice, or perhaps someone encourages you in the church? Now that you are adventuring have you abandoned your trade or have you tried to see both through?

Here are some personality traits for your cleric:

A druid with the guild artisan background presents an interesting conundrum. How does one so intimately connected with nature and so apart from civilization, maintain a thriving business and membership in a guild?

Well, for one some cultures like the elves, dwarves, and gnomes tend to have some connection to the natural world or even incorporate it into their daily lives. An elvish woodcarver druid, who uses their druidcraft to shape and cultivate special woods for uses in their crafting makes a lot of sense.

Humans and other not-so-nature-ified races can still have that connection, especially if they form part of the wide network of the guild artisans. Druids don’t require isolation to be druids, and urban druids certainly exist. A mason who speaks to earth elementals to build cathedrals or a glassblower who communes with fire spirits to create a beautiful stained window.

Consider why you left the trade behind, or how you still maintain it. Who int he guild were your friends and who were your enemies?

Fighters can make natural artisans, with the skills of a smith or armorer being directly related to their skills with arms. It makes sense that a weaponsmith might take up one of their own swords in order to find fame and fortune.

But even non-combat related professions might produce fighters, especially if part of a distant network of traders and merchants. Perhaps you learned to fight because you needed to defend your shipments of goods.

Think about how your guild connections might influence your decision to turn to a life of adventure. What is your character’s ultimate goal in life? What about the life of a guild artisan left them unfulfilled?

Monks can perform a variety of artisan roles in their monasteries in addition to training their martial skills. Any of the professions could fit easily with a monastic community, but consider how the trade connects with your discipline as a monk.

Ideally, the two could synergize. Your craft could be another expression of the spiritual transcendence that you seek. Perhaps by creating beautiful pieces of art, or finely honed weapons, you can express and explore your physical progress.

Think about why you left your monastery and the people you left behind. Why did you strike out on your own? Are you trying to maintain your trade while traveling or are you abandoning it for a life of adventure?

A paladin with the guild artisan background could be someone who started life as an artisan but found their true calling in their faith. It could even be that you abandoned your trade because of some encounter with the divine, but still maintain your guild contacts.

You could incorporate your trade into your faith, perhaps crafting fine glassware or weapons as an expression of your zeal. After all, paladins need leather saddles, armor and weapons need to be repaired, and food made for them. You could have been a supplier of a local Order of Knights and decided to join them.

I think the key here is deciding why you chose to be a paladin. What made you learn your combat skills, the tenents of your faith? What lead you to believe with such zeal in the cause that you champion? What was life like when you were an artisan?

Here are some personality traits for your paladin:

A ranger with the guild artisan background could have turned to rangering as a way to protect their investments, or as a way to acquire goods, like a trapper, miner, or hunter. They may have joined a guild of fellow trappers to share news of healthy stocks of quarry and to help control the price of skins.

Rangers are on the outsides of civilization, protecting it from monsters. An interesting combination could be to be a part of a guild of monster hunters or bounty hunters. Your trade tools could be a bounty hunter’s compass or even a kind of magic tracker than can be attuned to a bounty.

Questions to consider include who are the people in the guild that you have a connection with? How did you acquire your trade and why did you choose to live a life of adventure? Do you still maintain your guild status, or have you left that life behind?

Here are some personality traits for your ranger:

A rogue makes a wonderful guild artisan, applying their street-savvy and cunning to the cutthroat world of business. A rogue could make a good artisan of really any profession. You may find that your class and your trade are complementary and you might make it a character goal to advance your trade connections as you adventure.

A trip across the continent is a great excuse to gather some capital and make the business connections you’d need to create a business empire. Think about your goals and what your character wants to accomplish in their life.

You should consider when in your life you learned your trade and how you acquired your class skills. Did you pick up on as a consequence of the other? Who did you apprentice with and who in the guild do you have connections to?

Here are some personality traits for your rogue:

An alchemist who acquires magic after a particularly explosive experiment, or a blacksmith who found that he could melt metal with their hands. A sorcerer with the guild artisan background could find their bloodline an inconvenience or a lucrative opportunity.

Think about why you chose to go into a trade. Maybe it was a way to hide your bloodline, or your bloodline didn’t manifest until you were well into your career. Perhaps this spurs your adventure, seeking a cure, or mastery so you can use your powers effectively.

Sorcerers have a certain effortlessness about them that you can weave into your character. Their natural charm could be the key to your success as a guild artisan. Perhaps the guild sent you out on an adventure to find a new source of materials or a new source of trade.

Here are some personality traits for your sorcerer:

I always think of the proto-typical warlock – Faust – whenever I think of a warlock with the guild artisan background. Someone who makes a pact with an Old God, or an Archfey or a Devil in order to get ahead on a deal only to find themselves in over their heads as their patron demands more and more.

Warlocks are highly charismatic and perhaps they lean on this in their business dealings to ensure they get the best deal possible. Or perhaps you use the gifts given to you have a secret edge over the competition.

What was the initial reason for your pact with your patron? What did they demand in return? Who in the guild knows if anyone does? What do you want to do now that you have these supernatural powers?

Here are some personality traits for your warlock:

Wizards and artisans both require years of dedicated study, and a trade like an alchemist or even a wandmaker could work quite well to synchronize with their magical training. A wizard also is the right type of person who would have the temperament to get into the accounting weeds that come with any trade.

Think about the major events in your life, the moment you decided on a trade and the moment you began studying magic. These can form core parts of your backstory and even be core motivations for your character to go adventuring.

A wizard with the guild artisan background should consider when and how they studied their magic and their trade. Did they abandon one to acquire the other? Why did they leave their normal life to choose a life of danger adventuring? What are they seeking outside of the life as an artisan or wizard?

Here are some personality traits for your wizard:

Next week we will take a look at the Hermit background!

Banner image is A Goldsmith in his Shop by Petrus Christus.