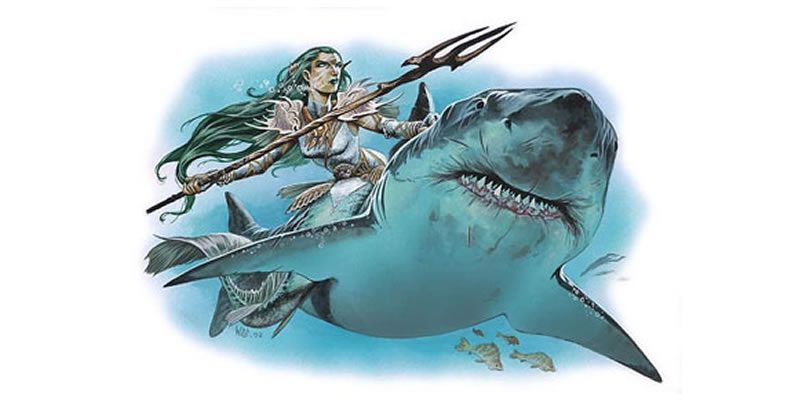 In this series I will be presenting creatures you can use for villains, lieutenants, minions, and wild encounters for 5th edition aquatic games, as well as encounter seeds for these villains at each tier.

This week I bring you aquatic encounter ideas for parties of 1st through 5th level characters. You can find lists of the villains, lieutenants, and minions referred to in last week’s Enemies post.

Unlike surface cultures, aquatic races rarely bury their dead in the ground. Civilized races that gather in large underwater cities sometimes create necropolises from coral reefs and atolls, ritually weigh down bodies to drop into drenches or the Deep, or wrap bodies in organic cocoons and float them in seaweed forests until they decay. Though the first and last options create versions of graveyards that can be manipulated by negative energy the same as surface graveyards do, crevices on the edge of large settlements or trenches that have been used by nomadic cultures for hundreds if not thousands of years to bury dead provide a dangerous amount of material for necromancers and aberrations from the deep.

The undead villains listed all have Intelligence scores of 10 or higher and can be used as hooks in a variety of adventures.

Hags are a classic villain in aquatic campaigns and though the listed hags have relatively low Challenge Ratings (2 and 3), they can easily be adapted to higher level threats by adding the resistances and spellcasting abilities of the Mage and Archmage located in the back of the Monster Manual.

Hags are most commonly encountered alone, but through necessity they may gather in covens of three. The three members need not be the same type of hag, though they often are. Hags seek classic villainous goals such as vengeance for a wrong, power over others, manipulation of arcane energies, etc.

Humanoid/piscinoid villains are the most varied creatures above and below the waves. You can run any style of game below the surface that you would above the surface with few changes.

The two main monstrous villains that work well at the lowest tier of adventures are the mind flayers and the yuan-ti. Though it may sound brutal to put the PCs against CR 7 creatures, the lieutenants and minions of these beasts can create a string of adventures that the PCs must navigate before eventually discovering their ultimate foe.

Even at the lowest tier, dragons can be used as antagonists for your PCs. Young green and black dragons can act as masterminds behind numerous plots using a range of minions, and perhaps even wyrmling younger siblings as lieutenants. Merrow and the new merrow hunter-seekers make excellent draconic allies, as do kuo-toa, reptilian beasts such as snakes, and even shambling mounds and other plant-like creatures.

A Roleplayer’s Guide To Awkward Moments