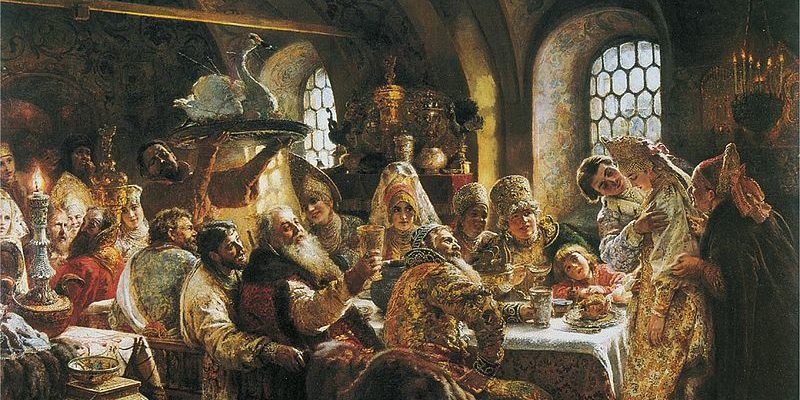 In almost any D&D or fantasy campaign, the roleplaying will eventually come around to the topic of food. Characters must eat and taverns and inns have to make a living. It’s also not surprising that players want to have conversations over meals and ales because that’s exactly what we do in real life. Food brings us together, it often sits everyone down in one place, and on some primal level, eating makes us more comfortable and therefore more talkative. That’s just the way our brains are hard-wired and it translates over well into most roleplaying situations.

But when these meals, snacks, or feasts pop up, there can be an awkward moment. Some DMs and players don’t always have a good grasp on what food should be offered in a typical fantasy tavern. Should it be all roasted Wyvern and Gelatinous Cube stew? Or should it be more traditional medieval foods? The choice is, as always, up to each individual DM; but, if you’re looking for some suggestions, all I can offer you is how I do it in my games and what my personal preferences are.

That being said, I usually go for more traditional meals. This would be the kind of stuff that was found on real medieval tables in Europe with a few exceptions. And, if you’re not really sure what food that would be, I assure you that you’re not alone. So that’s why I’ve put together this handy little meal guide that can serve as a sort of menu for fantasy DMs. I have also mentioned what would be served or eaten by lower class folks as well as the fine dining for the upper classes or even nobility as there is quite a great contrast between the two. I’m also sure your players will, depending on their situation, sometimes be eating with the peons and sometimes be eating with the Dukes so knowing the difference may also be handy. Thus, if you are feeling stuck on what to serve your wayward travelers, have a look at these suggestions:

The first thing to note is that medieval lower class folks usually only ate two meals a day (lunch at 9am and dinner at 5pm) while the upper classes ate three or four (breakfast at 6am, lunch at 12pm, dinner at 6pm, and sometimes a night cap or “mug up” between 10pm and midnight). If the lower classes had anything at all for breakfast, it would have only been a piece of bread and possibly some cheese with milk to wash it down. The upper classes or nobility had many more options, and higher quality options, to choose from. Breakfast for them might include a selection of fish including anchovies, herring, salmon, trout, or salt fish like hake or cod. It might also include porridge, stew, or sop. Sop, for your information, is any kind of liquid including wine, soup, sauce, or broth that would be “sopped up” with bread. And to drink, the better-offs would often forgo milk for wine or ale (yes, even for breakfast). Surprisingly, when they did drink milk, it was quite often almond milk as it did not spoil as quickly as the regular kind. Also surprisingly, there seems to be very little mention of eggs for breakfast for either the common folk or the higher ups. I suppose that preserving the eggs to hatch into chickens might have been a higher priority back in those days.

For the lower classes, lunch would be taking place around 9am or 10am and would be the first meal of the day. Often they would just eat as they worked or during a short break. Their lunches might include bread, cheese, salted meat or fish, potatoes, onions, nuts, and ale to drink. Simple water was often seen as “unclean” and milk did not stay fresh long enough. For the upper class, lunch was often had at mid-day and could be seen as a larger affair than dinner. It often consisted of two or three courses and included meats made up of beef, pork, mutton, and chicken; meat pies and shepherd pies; wild foul such as duck or goose, or fish often with several spices added. The drink was either wine or high quality ale. For dessert, they often had pies or fritters along with custards and cakes. It is also interesting to note that many of the dishes given to the nobility were only “tasted” with one or two bites before they would be sent back. This was regarded as the best way to sample everything the meal had to offer without getting too full. It also created a great deal of food waste which had a long history of angering the poor who were often starving or near to it.

On the lower class table, dinner was the largest meal of the day usually taken around 5 or 6pm. Ale or cider was the main drink and the food regularly consisted of soup, stew; gruel; occasionally a meat like rabbit, goat, or beef; occasionally salted fish; and often supplemented by bread or heated grains. Meanwhile, the upper class table was serving dinner at roughly the same time but it was often seen as a lighter meal and would frequently feature some of the rarer dishes such as sturgeon, pheasant, pigeon, swan, storks, cranes, shrimp, and oysters. The main drink was again wine, but also ciders and ale. Desserts included gingerbread, cakes, baked apples, and pies.

For the lower classes, a snack usually fell back upon the old staples of bread and cheese; but also biscuits, nuts, vegetables, and fruit if it was in season. The upper classes had deserts such as cakes, wafers, and pies; they also had stuffed eggs, smoked meats and fish, higher quality breads, and sometimes dates and other cooked fruits.

It is also significant to note that the medieval church frowned greatly upon decadent meals and lavish foods being served at any time other than accepted feast days. This was done in an effort to teach humility and restraint, stave off gluttony, and on some level conserve food supplies. However, when a feast day did finally arrive, the church and its community would celebrate with massive meals often consisting of larger game such as boar, deer, and bear. Monks and the clergy would often share their beer, ale, and mead with the common folk on feast days which was often far superior to what was normally offered. Also, store houses would be opened up when possible allowing better breads, biscuits, and baked goods to be made.

In conclusion, the medieval menu may not have as much variety and as much flavor as the foods we eat today, but I think many would agree that it was a great deal healthier than the sugar-laden and chemical-laced foods we eat. And while I love to add in little flares of D&D and fantasy into my meals and drinks (like grilled Owlbear and Dwarven Ale) the medieval menu is almost always what I go to when my characters are hungry. Cheers and may your bellies always be full!