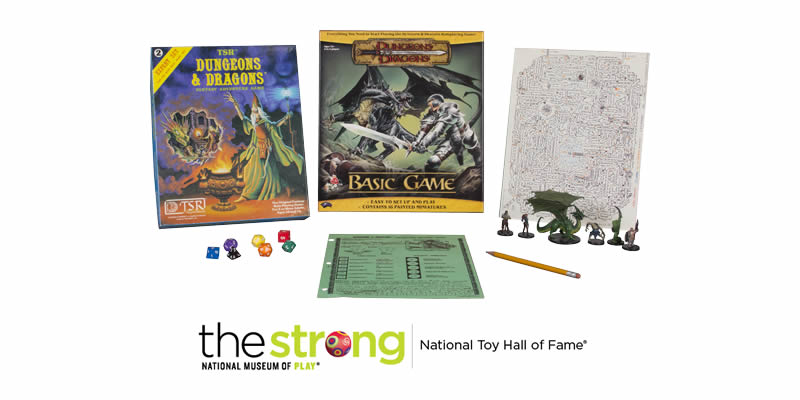 Here is the full press release:

It’s been 42 years in the making! Today, we’re excited to announce Dungeon & Dragons as a 2016 inductee to the National Toy Hall of Fame at the Strong Museum for Play in Rochester, NY. Since it was first published in 1974, Dungeons & Dragons has inspired millions of gamers to create stories and adventures and it has brought people from all backgrounds together to share those experiences.

Director of D&D at Wizards of the Coast, Nathan Stewart, was in Rochester to accept the award and witness history, as D&D was officially inducted into the National Toy Hall of Fame. It is not just a proud moment for Wizards of the Coast, but also for parent company, Hasbro. John Frascotti, president of Hasbro Brands said, “Dungeons & Dragons embodies Hasbro’s goal of creating the world’s best play and entertainment experiences and we are extremely proud to see D&D be inducted into the National Toy Hall of Fame alongside many other brands in our portfolio like Twister, Candy Land, The Game of Life, Mr. Potato Head and the Easy-Bake Oven. D&D has enabled fans to create their own stories for more than 40 years and we look forward to continuing to inspire imaginations by providing amazing play experiences.”

These long time players and fans of the brand at Wizards of the Coast were elated by the nomination, noting:

“D&D has become a rite of passage for children of a creative temperament. It’s incredible to think that what started as the marriage of tabletop wargames and pulp fantasy novels has become the iconic storytelling pastime for multiple generations.”
­­– Mike Mearls, lead designer, Dungeons & Dragons

“Perhaps the greatest innovation of Dungeons & Dragons is that it provides a way to play pretend with rules. I think when older kids and adults discover the game, they tap into a style of play from early childhood that they’ve forgotten. The game unleashes the individual imagination of each player while, at the same time, it draws them together to tell a story. You can discover a lot about yourself and each other in a very short time and in a fun way. Friendships that last a lifetime frequently form while playing Dungeons & Dragons.”
– Matt Sernett, game designer

“Dungeons & Dragons is not just a game – its legacy has been a part of our culture for generations. But perhaps its most important influence is with the positive impact it has made on children and adults in the form of enhanced social, math, analytical, reading, writing, and creative skills and friendships that have lasted for decades. It is an honor to be part of a team that continues to fuel an inextinguishable spark of imagination for years to come.”
– Shelly Mazzanoble, associate brand manager, Wizards of the Coast

For more information on the 2016 National Toy Hall of Fame Inductee ceremony, please check out http://dnd.wizards.com/ or http://www.toyhalloffame.org/.

Depression and Dungeons and Dragons