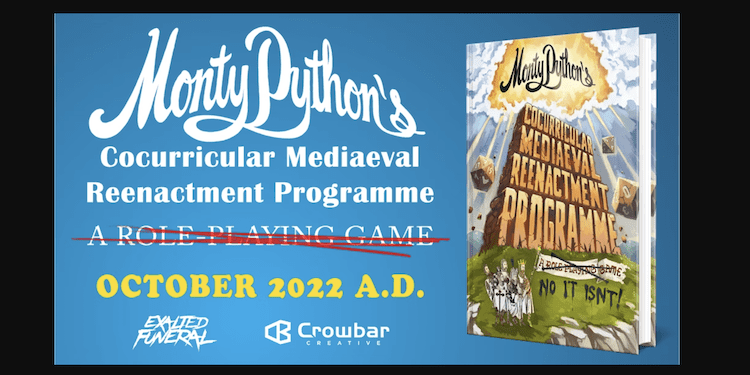 Developer Crowbar Creative and publisher Exalted Funeral announced a forthcoming tabletop role-playing game: Monty Python’s Cocurricular Mediaeval Reenactment Programme, which is, in fact, not a role-playing game (silly), but rather a very rigorous course of study intended only for serious students of English History. It is by no means a complete and comprehensive manual for running imaginative, highly unpredictable, Mediaeval-themed role-playing games based upon the complete comedic output of Monty Python with one’s friends.[1] 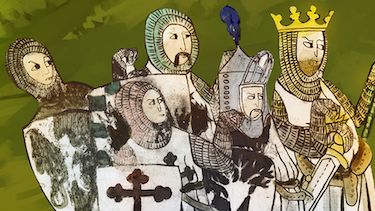 Though the game is set in Mediaeval England, it draws upon Monty Python’s complete catalogue of works–Flying Circus, films, albums, stage and live shows–to create an interactive world full of their unique characters, creations, and sensibilities, which can be brought to bear for long-term campaigns or a single evening’s  educational advancement. 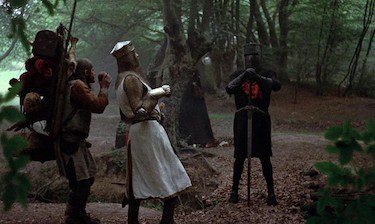 Players need not be familiar with Monty Python’s work in order to participate; nor is role-playing game experience required. (The latter would be entirely useless, as this is emphatically not a role-playing game, and if you do have extensive experience with such things, you are likely too silly a person to participate in this Programme and should stop reading immediately.)

Monty Python’s Cocurricular Medieval Reenactment Programme will be available to pre-order through Kickstarter in October 2022, with SKUs including the Bloody Peasant Edition, the Sensible Middle Class Edition, the Public School Edition, and the Upper Class Twit Bundle, along with early backer specials and add ons including custom dice, a Head of Light Entertainment screen, and a Fetchez la Vache set with dice catapults.

Founded in 2018 by Brian Saliba, Crowbar Creative is a  next generation education innovator based in Virginia. crwbr.com | @crowbarcreative

Founded in 2018 by Cristin and Matt Kelley, Exalted Funeral is a publisher of  ground-breaking English History curricula based in Idaho.

The names of actual companies and products mentioned herein may be the trademarks of their respective owners.

[1]  The publisher wishes to add that this is, in fact, exactly what it is: a tabletop role-playing game.

The Cursed Cavern of Time – Wizard’s ...