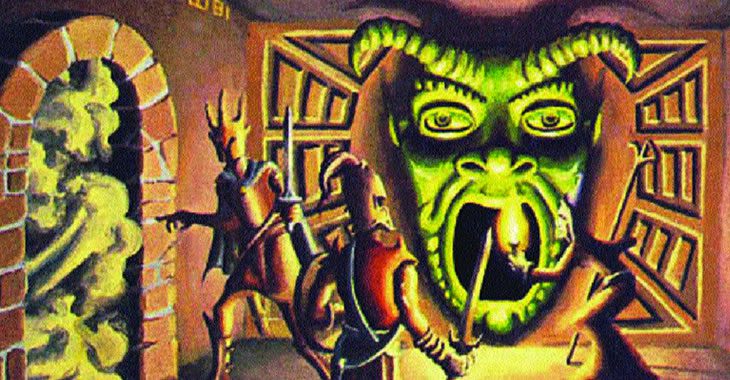 My Extra life D&D campaign is tomorrow, and I wanted to do something exciting & different.  But wasn’t sure what to do and was looking for something with a Halloween theme, but needed it to run for a long time….

A few weeks ago I started to hear from my son about character building. He had taken several characters systematically up to Level 20, and he started to weed out character classes that he didn’t like. Then he started to think how long it would actually take to get a character up to level 20, it would take forever.  I told him you could always start at a higher level and just play. Nothing against the rules with that, and it’s been done before. Then I remembered another player in a D&D Next play-test campaign about 6 months ago wishing they could play Tomb of Horrors. I had done a little research, and I let him know that would take a while before the characters would be ready to tackle the Tomb, as they would need to be at least level 10.  But we could keep going and level up and play it later on.  He quit the next week. poop…

So, I had a little research done with D&D Next from the playtest rules and bestiary.  But now I need to put everything together for a D&D 5e game.  So first, I let all the players know that they needed to have a level 10 character built up. That created a commitment on my part to get everything ready with the Tomb.  So where do I go next? I do have a copy of the tomb from the reprint Dungeons of Dread for AD&D, and the 4th edition Tomb of Horrors (hardcover and a booklet), and I have the free PDF stuff that I got with D&D Next playtest rules.

Am I missing anything else? I searched the web if anyone else had put anything together yet. And that led me to Dungeon magazine number 213. Chris Perkins did an adaption for D&D Next. Looked that up, and it looks perfect. Why didn’t I see this before. Everything is in an electronic format, and it will be much easier to just have on my chromebook/DM Screen.  I then set out to collect everything, and start preparing.

BTW, if you have a D&D Insider account here is the download link: http://archive.wizards.com/dnd/TOC.aspx?x=dnd/4new/dutoc/213. If you don’t then use the the AD&D module, it should run as is, and you’ll need to write up all the room descriptions.

From the Dungeon Magazine 213, everything for Tomb of Horrors starts at page 68, and for 5th edition you can skip page 91 & 92 if you are printing this out on paper.  pages 91 & 92 are the 4th edition conversion notes, but on Page 91 there is one paragraph that you might want:

Concluding the Adventure
Destruction of the demi-lich marks the end of the adventure. Characters who survive the ordeal can leave the tomb with a king’s ransom—not to mention bragging rights, for they have prevailed where countless others have not!
This ends the expedition to the Tomb of Horrors. We hope you and your players have found it exciting, challenging, and rewarding.

All of the illustrations go from page 93 to 114.  I printed out those pages on card stock.  There are several illustrations that have two images per page so I cut those in half.  I numbered the back of them, and have them ready. I want some color illustrations, so if I have time, I might put some on my chromebook.

Now just looking at the big baddy listed is listed as Level 14 with 11530 XP, on page 90 and his introduction:

The skull rises into the air, its ruby eyes flickering with malevolence, its diamond teeth agleam with ancient hunger for the souls of the damned.

But looking at the Monster Manual, he is called out and Acererak Demi-Lich on page 49 is shown to be CR 23 (50,000 XP). Holy Cow! I went on twitter and asked Chris Perkins if Level 10 characters would even have a chance…

“@mrlong78 You’ll need to nerf Acererak or give him some vulnerabilities. Or not. If the PCs make it that far, their “reward” could be death!”

Well maybe at least one of them will live. 🙂

I think I am ready. I let all the players know that if their characters happen to find misfortune, and don’t get to the end, then they can start over after all the players suffer a similar fate. Their characters will need different names, and since they would be starting with a new character,  it may be a big time laspe between adventures. I will need to make sure to remember what they did to the tomb on their way in the first time.  I know there is another adventure Return to the Tomb of Horrors, but that’s not what we are going to do.  So in the original S1 there is a table for magic items to hand out.  I’ve already been asked about what treasure would the starting characters get, so here is the guide I’m using from page 11 in S1-Tomb of Horrors:

Those descriptions I am going to take right out of my AD&D 1E books.  The players are also going to be starting with 10,000 g.p. in gems. For the item list above, I’m thinking of allowing each player to roll a d20, and diving out the treasure they get if their character is close to that type of class.  If not, roll again.

Also, there are other magic items that I might give out before the game from Hoard of the Dragon Queen or Lost Mine of Phandelver or any of the Adv. League expedition games.

And check out this illustration: http://www.rpgbooster.com/wp-content/uploads/2013/04/map_tombofhorrors.jpg

So after we run, I’ll try to post up an update with what happened, and how much money was raised for Extra Life.

As always, I am hopefully that we have as much fun as other people have had. Here’s another blog that ran and put together their log of the game:  http://thedungeoncrawl.blogspot.com/2011/07/tomb-of-horrors-overview.html

Thanks for Reading, Have Fun!