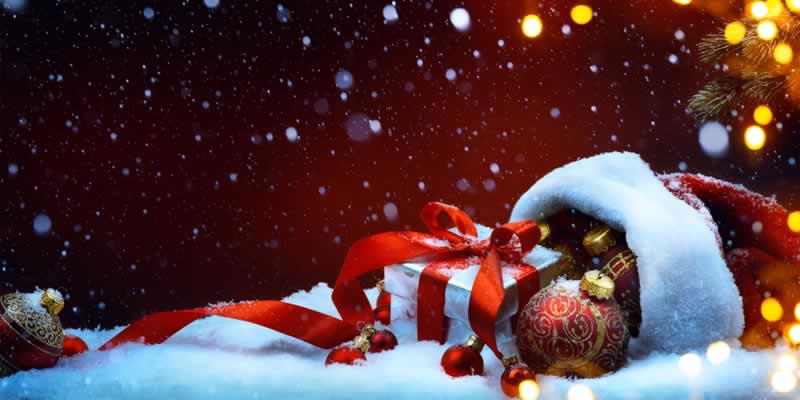 The Darkest Night is a holiday themed adventure where players battle an ancient evil to save Krinklefest. This adventure can be used as an outline for any game system, but the specific details are for four 1st-level adventurers using the rules of the 5th edition of Dungeons & Dragons. 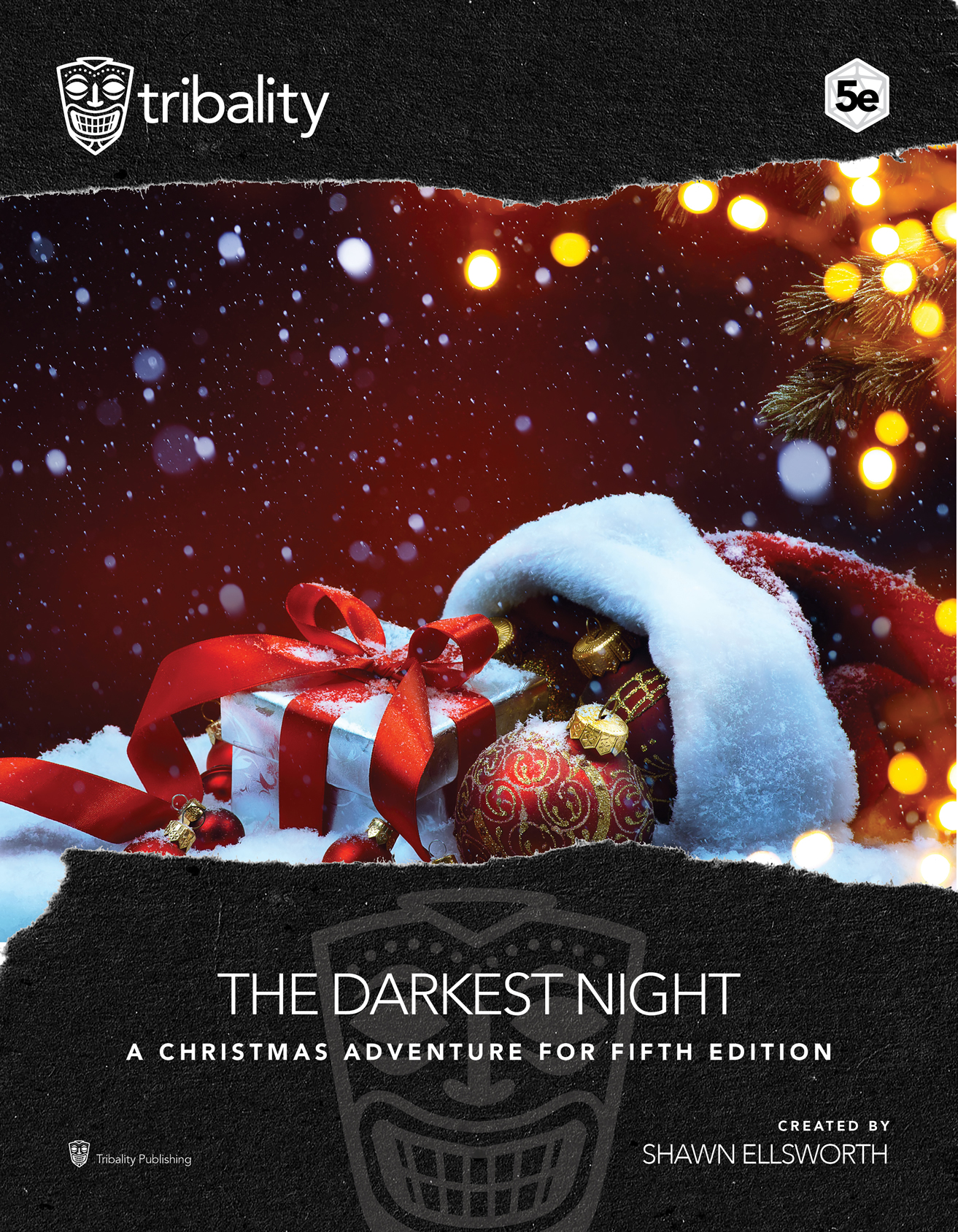 We created a PDF of this adventure! We set the price to ‘Pay What You Want‘. Any support is appreciated, but consider this a gift to all of our readers and visitors to our publications page. Check it out:

Far to the north, the thriving mining town of Iceville survives long, cold and dark winters. When the nights are longest, the people of Iceville light up the darkness with candles, song and the exchange of gifts during Kringlefest. The celebration is named after the mysterious Kringle, who long ago brought light to Iceville, after the dark days. But Kringle is most loved, for giving every child in town a gift during Kringlefest, that he made in his magical workshop. It is believed by many, that Kringle travels into town on a red sleigh full with presents, drawn by eight flying reindeer. Kringle silently enters each house without ever being seen by children, or their parents. In exchange for the gifts, the children leave treats for Kringle, which are always gone when they awaken to find their gift.

Kringle is actually a benevolent gnome, named Nicholas Kris Klaas Kringle, who has made it his life’s work to bring light to the people of Iceville. For nearly 500 winters, this ancient gnome has spent each year creating gifts in his workshop with his helpers. Kringle’s workshop is said to be full of clockwork wonders and magical treasures, but it’s exact location is a secret.

Over the years, Kringle put on lots of extra padding, thanks to the treats, and he is no longer the young hero who saved Iceville nearly five centuries ago. This year, an ancient enemy has finally gained back his strength and decided it is time for the darkness to return. Krampus, a monstrous evil, has a much different plan for this year’s Kringlefest. Krampus has enchanted Kringle and his helpers and is forcing them to build an army of toys. This year, Krampus will finally return Iceville to the darkness that existed before his defeat to Kringle centuries ago.

The adventurers can arrive in Iceville the day of this year’s Kringlefest, or they can be locals from Iceville. Either way, the adventurers should learn Kringle’s story from a bard performing at the inn’s tavern, or in the town square. The song/story should detail the exploits of Kringle long ago and his workshop full of magical wonders. The name of the evil should be kept a secret from the players. Use the adventure background as a base for your song/story.

One of the following hooks can be employed to entice your adventurers into action.

A DC 15 Intelligence (History) check with allow your players to also find out that 480 years ago Kringle defeated a demon that enslaved the people of Iceville. The unspeakable evil had placed Iceville under a spell of eternal darkness, allowing it to feed off the fear and sadness of the people. The monster’s name has been lost to time. If their check is a close failure, let them know the same details, just don’t specifically mention the monster is a demon.

Hopefully your adventurers are ready to head out of town to Kringle’s Workshop and save the night. If you have time, you could spend a little time in town shopping first.

As you leave town, you find the winding path through a pine forest to Kringle’s Workshop. After traveling through scattered pine woods for an hour, the forest thins and you enter a large clearing lit by the partial moon. Suddenly four piles of snow start to rise into humanoid shapes that are 30 feet in front of you.

Roll initiative and start a battle against four snow people. The snow people will often choose to hide and drift to get to weaker enemies. Adjust the number of snow people up or down for groups that are larger or smaller than four players.

Having survived the advance guard, the adventurers make it to the workshop without further incident.

On the far side of the clearing you find the path again. After a few minutes your group reaches the top of a small hill, you see a large building (120 feet wide by 40 feet deep) on the edge of a woodlot 200 feet away. The building’s many windows are lit by candlelight and you can make out activity inside. Moving around the outside of the building are six short, silhouetted shapes that appear to be on patrol. On the front of the building you can make out a set of large double doors that appear to serve as the main entrance.

Your adventurers have a variety of options available to them to avoid a tough head-on battle with six toy soldiers. Some obvious choices are:

If they do not find a way to avoid a a head-on battle, have then face six toy soldiers. The toy soldiers should simply attack their closest enemy or continue to patrol.

Now that adventurers are inside the workshop, the time for the final battle is near. Trying to sneak into the workshop without the notice of Krampus will be difficult and only possible if the group avoided fighting in Encounter 2. Each PC will need to pass a DC 20 Dexterity (Stealth) check. If the majority of them are successful, then award a surprise round to the players. Otherwise, Krampus is waiting for them.

After moving through a small warehouse, your group enters into main area of the workshop. The main workshop area is a large room with a high ceiling with crossbeams (60 feet wide by 40 feet deep with a ceiling is 30 feet above the floor). The room is filled with a dozen gnomes, in pointy green and red hats, working away on toy soldiers. At the far end of the workshop sits a 6 foot tall monster covered in dark fur with cloven feet, a tail, two horns, pointed ears and a long tongue.

Begin the battle. The players will face off against 2 toy soldiers and Krampus. Krampus will use darkness early on and then focus on charging with his horns to gore them. The toy soldiers should simply attack their closest enemy. If the battle is too tough for you players, you could have one or two gnome helpers (use Commoner stats on page 345 of Monster Manual) wake up from the enchantment using whatever they can find as weapons (use Club for stats) or throw a healing potion to a player.

The monster turns and looks right at your group and lets our a huge roar. His roar extinguishes the candles and plunges the large workshop into darkness.

Have Krampus throw out some quotes each round.

Congratulate your players on saving Kringlefest.

The gnomes, no longer enchanted, cheer and thank each of the adventurers with hand shaking, pats on the back and hugs. A moment later an old bearded gnome appears towards the rear of the crowd, who was not there a moment ago. He introduces himself to the players as Kringle. Kringle is a tall old gnome with kindly, jolly looking face. Kringle is wearing a red coat and hat trimmed in white fur. He is tall and plump for a gnome and strokes his long white beard while talking.

Have a completely recovered Kringle thank each of the heroes by name and give them all a personal gift. Make is special, magical and tailored for each player, like Kringle knew they’d be visiting him.

As you leave the workshop, you notice the gnomes have opened up a large door on the side of the building and are leading a sleigh pulled by eight reindeer, loaded with bags and parcels.

Some ideas for Kringle’s presents: