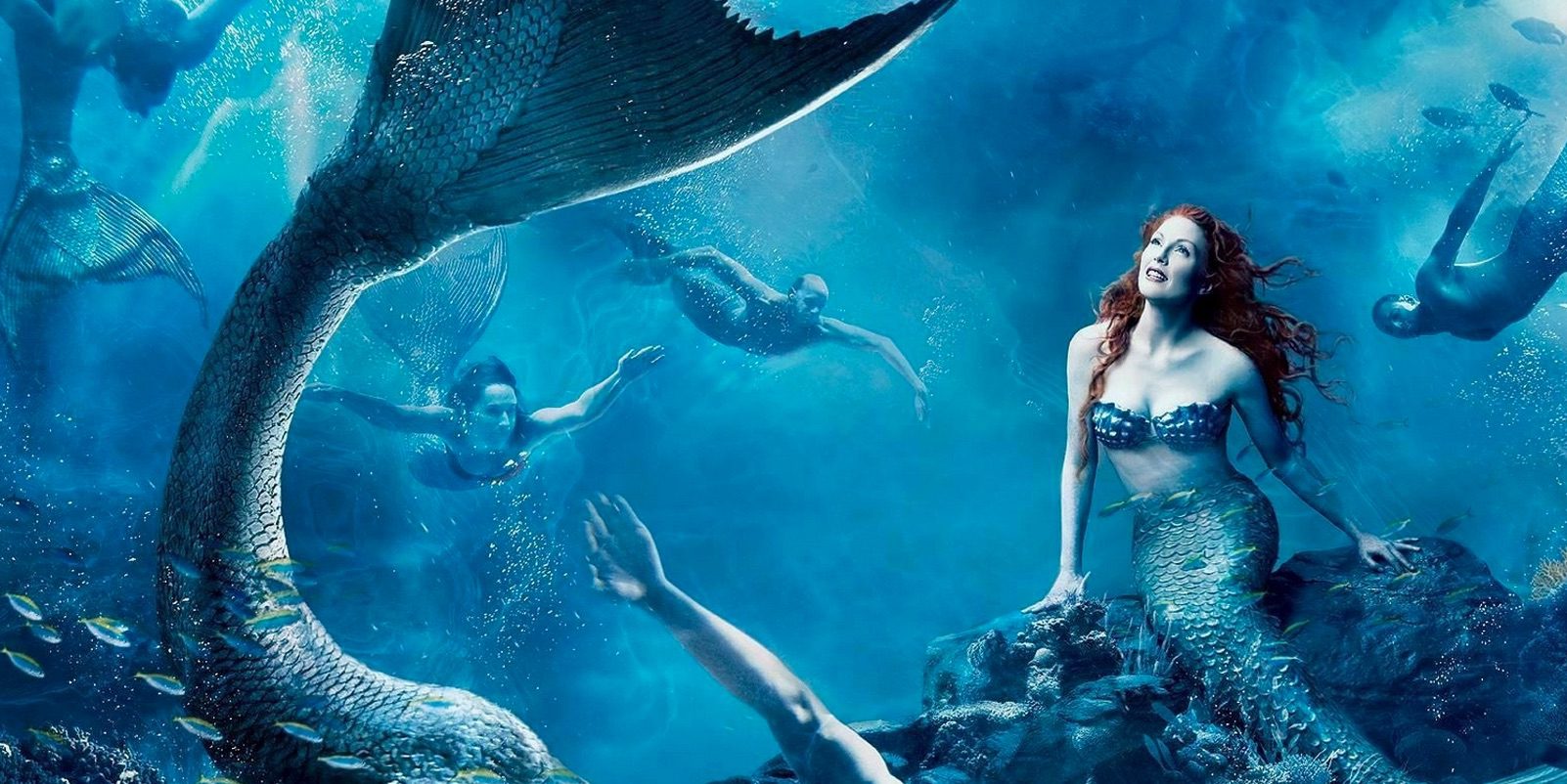 The human equivalent under the seas, merfolk are far more than a single race. This highly adaptable race varies in size, coloration, features, culture, and religion across the world.

Ability Score Increase. Your Dexterity increases by 2, and two other ability scores increase by 1.
Age. Merfolk have lifespan similar to humans, reaching maturity by their early teens and rarely living longer than a century.
Alignment. Merfolk, like humans, tend toward no particular alignment. Many tribes have a balance of lawful and chaotic elements, so are often perceived as neutral.
Size. Merfolk come in a variety of lengths and weights, ranging from 5-7 feet in length, and from 100-300lbs. Your size is medium.
Speed. Your base walking speed is 10 feet and you are always considered prone. You have a swim speed of 30 feet.
Adaptable. Like humans, merfolk are adaptable to a wide range of environments and social structures. Merfolk may select any three skills, tools, or languages to become proficient in.
Amphibious. You can breath both air and water.
Languages. You speak, read and write Aquan as well as one other language (typically Common)

As with other CR 1/2 or less monsters, the merfolk PC race uses one of the core races as a base; in this case, humans. In most aquatic campaigns, merfolk are the most common civilized race under the waves, making parallels to humans easy to make. Despite its unusual anatomy and alien appearance, the merfolk has very few innate abilities. At first glance, their movement modes parallel land-based humanoids, but since land-based humanoids have effective swim speeds of 1/2 their land speed, a merfolk is actually short in that department. Being amphibious is a significant advantage in any aquatic or coastal campaign, but aside from that, merfolk aren’t as interesting to play as some other races at first glance.

With the exception of their amphibious feature, merfolk could simply mimic humans with a +1 to all ability scores, or +1 to two scores, plus a skill and a feat. I didn’t want to parallel humans that closely, instead making the merfolk something different and interesting. I tweaked the ability scores to more closely resemble half-elves and reflect the merfolks ability scores in the Monster Manual, then added the Adaptability feature that is slightly less powerful than the human extra skill/feat option, but is still tempting to players who enjoy a range of skill/tool/language options.

If your interested in more specialized races of merfolk, check out the sub-race options below.


Merfolk have the same variety of backgrounds as surface humans.


Just as with backgrounds, merfolk adventurers possess a wide range of classes. Of course, the aquatic barbarian, cleric, paladin, sorcerer, fighter, druid, and ranger archetypes from the Aquatic Builds series are all excellent choices for merfolk, as are bards from the College of the Sea Singers.

Like with humans, the merfolk’s Adaptability trait allows players to represent a wide range of cultures by mixing and matching skills, languages, and tool proficiencies, just as human players may use the optional bonus skill and feat to represent a range of surface cultures. Some players may wish to have their merfolk hail from a culture or region that isn’t as easily represented by skills and tools. Below you will find alternate merfolk subraces whose traits replace the core merfolk’s Adaptability trait (with the exception of the land-walkers).

[This mechanic parallels my previous article on alternate human subraces that you can find at www.gameschangelives.com.]

Arctic merfolk thrive in the food-rich waters of the polar caps. The largest of the merfolk sub-species, arctic merfolk have have a think layer of subdermal fat that protects them from the extreme cold.
Arctic Merfolk Traits (replaces Adaptability): +1 Constitution; this stacks with other ability score improvements to a maximum of +2. Land speed is reduced to 5 feet. Resistance to cold damage. Advantage on saves against cold.

These merfolk have found their home in the Depths, the aquatic equivalent of the lightless Underdark. Deep merfolk rarely come into the light zone and have adapted themselves not only to the cold, pressure, and dark of the Depths, but to the inhabitants and predators that would drive their light-dwelling relatives insane.
Deep Merfolk Traits (replaces Adaptability): Darkvision 60 feet. Resistance to cold, force, and psychic damage. Light sensitivity.

DM’s Note: If you’d like to allow your players to choose an aquatic race that doesn’t require the rest of the party to be prepared for underwater adventures every game, consider introducing either land-walker merfolk or selkie to your games.

Land-walkers are a rare group of merfolk that have learned a ritual that allows them to walk among surface dwellers. The addition of this class feature replaces 1 skill/tool/language proficiency of the Adaptability racial feature. Land-walkers who have completed the ritual have their tails replaced by two legs. The texture of their skin and hair, as well as their facial features become similar to half-elves, though they retain the unusual skin and hair color of their race.
Land-walker Merfolk Trait: Land-walk Ritual [You may choose one of the following Speed options: Walking 30 feet; or the standard merfolk speed option. You may change between these speed options by completing a 10 minute ritual. Completing this ritual more than once before taking a long rest causes 1 level of exhaustion per additional time the ritual is completed.]

The land-walker merfolk option was inspired by reader Caleb Martin. Thanks, Caleb! Enjoy.

The most nomadic of the merfolk races, open-ocean merfolk follow large schools of migratory game-fish through the vast expanses of the world’s oceans. These merfolk are fast swimmers and are constantly on alert for the kraken, sea dragons, megaladons, and other predators that call the open ocean theirs.
Open-Ocean Merfolk Traits (replaces Adaptability): Swim speed 40 feet. +5 passive Perception. You always know which direction is north as well as how deep you are below sea level.

Of all the races of merfolk, the tropical race has the most interaction with surface humanoids. Their charismatic nature, otherworldly features, and stunning coloration fascinate most surface dwellers. Many tribes trade regularly with coastal villages, islanders, and fisherman, and some have created permanent diplomatic outposts near major shipping lanes. Tropical merfolk are the least nomadic of the various tribes, shaping permanent cities from coral reefs, forging alliances with intelligent sea creatures like dolphins, whales, and cephalopods, and perfecting advanced aquaculture techniques.
Tropical Merfolk Traits (replaces Adaptability): You have advantage on Persuasion skill checks involving aquatic animals and civilized humanoids. You may cast speak with animals once per short rest.

“From the Depths” fan and designer, Nickolas Hartunian, was inspired to create his own land-walking merfolk variant after reading this post. This version blends the shapeshifting ideas of the selkie with the classic merfolk, allowing you to play a merfolk in a land-based game. I loved it so much I wanted to repost it for all you mer-fans out there.

Ability Score Increase. Your Dexterity increases by 2, and two other ability scores increase by 1.
Age. Merfolk reach adulthood in their late teens but often live up to 300 years.
Alignment. Merfolk, like humans, tend toward no particular alignment. Many tribes have a balance of lawful and chaotic elements, so are often perceived as neutral.
Size. Merfolk come in a variety of lengths and weights, ranging from 5-7 feet in length, and from 100-300lbs. Your size is medium.
Speed. Your base walking speed is 10 feet. You have a swim speed of 40 feet.
Amphibious. You can breath both air and water.
Shapechanging. As an action, when on land, you can magically assume a bipedal humanoid shape similar to that of elf, human, or half-elf. Your humanoid form appears as your merfork form with legs in place of a tail and a walking speed of 30. In this form lose your swim speed and follow all the normal rules for swimming. In addition, when you change shape from merfolk to human form, you store your merfolk essence in the form of a trinket, usually seashell necklace or seafoam silk shawl or item of that nature, and must keep it safe and secure. As long as you have this item in your possession, you may use your shapechanging ability at will and may maintain either form indefinitely. Without this item you may not use your shapechanging abilities to assume your merfolk form until it is retrieved. If you are the target of a remove curse, greater restoration, heal, regenerate, or wish spell you immediately assume your merfolk form and cannot use this shapechange until the next sunset (at which point you receive your new trinket.)
Siren Song. Merfolk are known for their beautiful songs. You have proficiency in the Performance skill.
Keen senses. You have proficiency in the Perception skill.
Languages. You speak, read and write Aquan and Common.