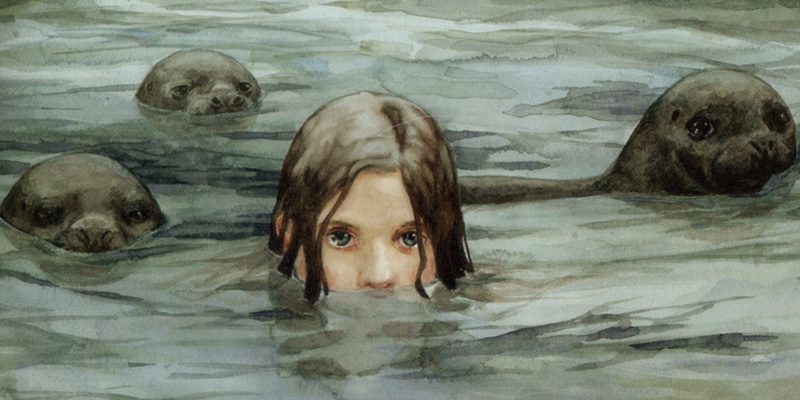 Like elves, the origins of the selkie race lay in the Feywild. A type of shapeshifter, a selkie’s normal form is that of a unique seal species who can shed their skin to become a full-figured human touched by fey beauty. Graceful and kind, Selkies spend the majority of their lives in the cold waters of northern oceans, though some tribes migrate to and through more temperate climates.

Selkies are nomadic, maintaining pods of two to ten family members who travel with and live alongside pods of common seals. A selkie’s seal form (size, shape, and coloration) is similar in many ways to the common seal and is indistinguishable to an untrained eye. A successful Nature check (DC 15) can determine that one or more selkie among a pod of common seals is of a different species. A selkie’s humanoid form is indistinguishable from normal humans except under close scrutiny. A selkie’s fingers and toes have webbing slightly longer than that of a normal human, though this webbing extends significantly when exposed to water. In addition, a selkie’s eyes are often larger and darker than most humans, adding to their kind, almost child-like, expression. Selkie can mate with both common seals and humans as well as their own kind. When mating with a non-selkie there is a 50% chance the child will be born a selkie and a 50% chance it will be born a normal member of its non-selkie parent’s race, though even these children have a sometimes inexplicable draw to the ocean.

Though most selkies are happy living their lives exploring the oceans and coastal regions with their families and marine friends, some are born with an insatiable curiosity about the far oceans, deep trenches or legendary ruins at the heart of the surface world. Selkie adventurers use their affinity for magic and natural charm to survive in the bizarre world of surface culture, becoming bards, druids, rangers, rogues and wild sorcerers. Myths of selkies making pacts with twisted beings of the deep seas are common morality tales among the sea-dwelling folk, though the occurrence of selkie warlocks is extremely rare.

You share a number of traits with other selkie.

Age. Despite their sylvan nature, selkies age at the same rate as humans, reaching adulthood in their late teens and live less than a century.

Alignment. Selkies live for freedom, both for themselves and others. Most selkie tend toward chaotic and good alignments, but neutral selkie are not uncommon.

Size. Selkies full-figured and shorter than typical humans, ranging from 4′ 6″-5’6″. Your size is medium.

Speed. Your base walking speed is 30 feet in human form.

Darkvision. Your sylvan ancestry has adapted your physiology to both the twilight realms and the depths of the ocean. You can see in dim light within 60 feet of you as if it were bright light, and in darkness as if it were dim light. You can’t discern color in darkness, only shades of gray.

Shapechanging. As an action, you can magically assume the shape of a seal. Your seal form is as unique as your human form and cannot be changed. While in seal form, you follow the same rules as a druid using the Wild Shape class feature. In addition, when you change shape from seal to human form, you shed your seal skin and must keep it safe and secure. As long as you have your seal skin in your possession, you may use your shapechanging ability at will and may maintain your seal form indefinitely. Without your seal skin you may not use your shapechanging abilities until the skin is retrieved, you are the target of a greater restoration, heal, regenerate, or wish spell, or you regenerate the skin after a year and a day.

Aquatic Grace. Even in human form, you are as at home in the water as you are on land. Swimming does not cost you extra movement. You can hold your breath for a number of minutes equal to your Constitution score and may double any proficiency bonus you are allowed on Athletics checks to swim.

Languages. You can speak, read, and write Common, plus either Aquan or Sylvan. You may also speak to and understand all species of marine mammals as though under the effects of a speak with animal spell. Though they speak Common, selkie accents are influenced by their Aquan and Sylvan tongues, causing them to stand out among local communities.