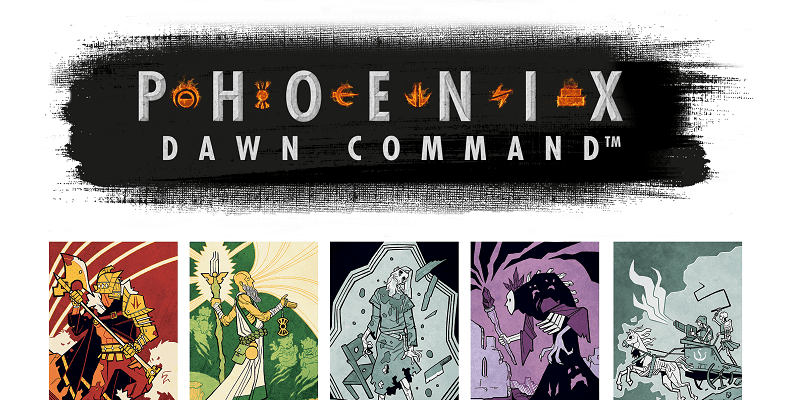 The Kickstarter from Twogether Studios brings us Phoenix: Dawn Command RPG. It is an RPG that utilizes cards for conflict resolution, determine actions for the players, and create hooks for the story.  Also character death doesn’t stop your progress in the story, because death is what will make the character stronger…but you can only return 7 times.  The kickstarter is getting close to funding, and looks like a very exciting game. Here is a link to the kickstarter campaign:

Phoenix: Dawn Command is a card-based roleplaying game with a unique approach to character death. In Phoenix, players assume the role of supernaturally empowered champions bound together to defend a fantasy world under attack by threats that no mortal could withstand. These heroes face harsh odds every mission, and many won’t survive. But death isn’t the end of your character’s story; it’s the start of the next chapter.

A video on character creation and gives some more insight of the game mechanics:

Phoenix: Dawn Command will include the following components.

Keith Baker has been designing games professionally for over two decades, and has developed card games, RPGs, computer games and more. He’s best known for creating the Eberron campaign setting for Dungeons & Dragons; this world has been used as the foundation for two computer games and dozens of novels and game supplements. He also created the card game Gloom, a casual storytelling game. Phoenix: Dawn Command is a convergence of these styles – an innovative roleplaying game set in a compelling world, with accessible rules that encourage storytelling. Keith is designing the game, along with Dan Garrison.

Jenn Ellis has built a career on solving complex problems in creative ways. She’s consulted for Fortune 100 companies on product development, helped make healthcare at the Olympics go digital, and once started a summer camp. She is the producer of Phoenix: Dawn Command and co-owner of Twogether Studios.

Dan Garrison is a lifelong gamer and gamemaster with a long history of developing unique systems and game settings. Phoenix is his first commercial game product. Dan is co-designer along with Keith.

Grace Allison was born and raised in Iowa, much like Captain Kirk. She now lives in Portland and is a member of Periscope Studio. She is an avid gamer, a horror movie enthusiast, and a supporter of animal rescues. Grace’s best known works include WANDER: Olive Hopkins and the Ninth Kingdom for MonkeyBrain Comics, as well as her color work for projects by Marvel Comics, IDW, Dark Horse Comics, and Thrillbent.

Rich Ellis is a cartoonist, illustrator and storyboard artist based in rainy Portland, Oregon. Rich is a self professed ninja enthusiast, guitar lover, and D&D nerd. Rich is best known as a co-creator of IDW’s Memorial and his work on Operation S.I.N. and Superior Foes of Spider-Man for Marvel Comics.

Veronica Ewing is a board game enthusiast who works as a Graphic Designer in Portland, OR.

You can read even more on the development of the game at Keith’s development blog at Keith-Baker.com and the company’s website at Twogetherstudios.com