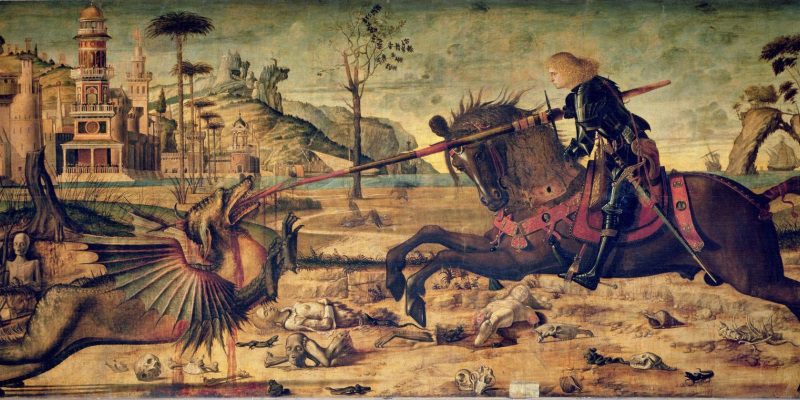 In last week’s article, I talked about the 4e Paladin, where magical power takes center stage in the class and distances Paladins from the strictly chivalric-warrior-on-horseback roots. I also covered the 4e Blackguard, a Paladin build for tormented anti-heroes, tragically flawed heroes, and outright villains. In 5e, we see theme take center stage over mechanical differentiation, and this extends to the Paladin; we also see a meaningful exploration of a new Paladin theme for the first time since… ever. I’ll also be contrasting the Paladin to a 5e multi-class Fighter/Cleric of various level ratios.

The Paladin writeup includes three different character descriptions, pointing out the variety available within the class. The text describes a human, a dwarf, and an elf, while the art depicts a half-orc – a nice move in itself. The text describes all paladins as crusaders for justice and righteousness, which is interesting now that there are no alignment rules anywhere in the class. At all. There’s clear room for paladins of evil alignment, who nevertheless espouse goodly moral tenets. (Paladins can still fall from grace, though; I’ll get to that.)

Overall, the style of the class, much like the edition itself, looks more like 3.x than 4e – no surprise there. Most of the features are recognizable from 3.x, if you squint a bit…

That’s it for core class abilities, but of course we’re far from done with the Paladin. There are three Oaths in the Player’s Handbook, and an option for Oathbreakers in the Dungeon Master’s Guide. The Paladin falls into the category of classes with fewer customization options, along with the Cleric, the Rogue, and others. I’m not going into minute detail on each Oath feature, but here they are in more general terms.

The Oath of Devotion is the paladin that the five prior editions of D&D have prepared us to expect. They might be more defensive, with a weapon and shield, or more offensive, with a two-handed weapon, but they’re the classic knightly paragons of virtue. Of all the oaths, this one is the hardest to twist toward evil, but a paladin who took a particularly ironclad approach to the tenet of Duty might feel obligated to serve a lord who had fallen into cruelty. That paladin would suffer terrible guilt for the callous actions that said lord requested and required. The tenet of Compassion also involves wiggle room that could lead a paladin into darkness in wartime.

The Oath of the Ancients is for Green Knights (Undying Sentinel is a little on the nose, but may he be shamed who thinks badly of it) and Faerie Knights, and for those with a primal dedication to life and light. Not gonna lie, I really want to play one of these on theme alone. It’s also very hard to twist toward evil, though I think “classic” elven arrogance is a pretty workable angle. Equally plausible is treachery in the service of preserving life, possibly leading the paladin to do evil in the short term for long-term gain, or vice versa. It becomes a question of when the Gods or the paladin feel that the Code has indeed been broken – but then there’s still room for atonement in 5e’s paladins. The sidebar on breaking your Oath and falling from grace takes a pretty enlightened view of sin, penance, and redemption, which also makes me happy. This Oath points back to the Warden of 4e, the Primal-source defender, especially in its bonus spell list and its 20th level transformation power, Elder Champion.

The Oath of Vengeance is the darkest of the Player’s Handbook oaths, in a “grim avenger of the night” way. It points back to the Avenger of 4e, the Divine-source striker, in both thematic and mechanical terms – the Vow of Enmity is a straight lift aside from its usage limits. It isn’t a cloth-wearing class, though, so they’re a lot less like Assassin’s Creed knockoffs. (I’m a little conflicted about that, because I loved Avengers.) Thanks to their bonus spells and their Oath features, the Oath of Vengeance is one of the top damage-dealing subclasses in the game, especially against single enemies. It takes… basically nothing… for the Oath of Vengeance to slide into evil, since their Oath allows them to ally with lesser evils to take down greater ones, they have no obligation to show mercy, and they specifically have no boundaries to the means they may use to complete their mission. If that’s not a little chilling, you may not be paying attention.

Then there’s the Oathbreaker, found in the DMG. This is how 5e handles the anti-paladin, the blackguard, the WoW-style death knight: by letting you change your subclass in the course of play. Mechanically, it’s a damn sight more graceful than the 1e or 3.x iterations of the concept. The oathbreaker is a bit more powerful overall than the Oath-bound paladins, but then I’d be sad if the dark path weren’t the easy way to power – I’d go so far as to say it could use just a little more destructive potential.

Here’s the single most important thing: paladins don’t become Oathbreakers on incidental violations, or anything short of conscious embrace of evil. Since I’ve talked at great length about how paladins in many editions cause fights between the player and the DM where interpretation of good and evil are involved, I deeply appreciate 5e addressing this. Oh, sure, players who want a reason to argue with the DM, or vice versa, will still find it. No mere rulebook can stop that! But the text doesn’t frame the DM as the heavy-handed arbiter who punishes players who get out of line, nor as the one-strike-and-you’re-out judge.

Another thing I love about the Paladin: the Oaths present three conflicting worldviews that can bounce off of one another really wonderfully. I would love to see someone run the Pendragon Great Campaign using 5e, but allowing only Paladins for PCs. That could be a lot of fun. (To make it a little more like the run of the Great Campaign that I played, you could allow one party member at a time to be a Barbarian, Druid, or Wizard. I love that it’s a setting where Druid and Wizard are externally indistinguishable.) In any other campaign, paladins are rare, and you’ll almost never see two in the same party; flipping that assumption would make some really interesting things happen. Also, the class is well-rounded enough that they shouldn’t have any major problems other than rogue skills… which are beneath their honor anyway.

Other than some concerns about just how good the smiting damage is (especially as the most comparable class, the Ranger, is underperforming), the Paladin is a great class in 5e. It resolves many of the issues of previous editions: narrowness of theme, unavoidable and irresolvable conflict with other players and the DM, and so on. More subclasses should supply as much roleplaying grist as Oaths.

What if you’re playing in a 5e game with only the Basic Rules PDF, except that one player has ripped off the multi-classing rules and maybe also the feats? (I don’t know your life.) Can you make something mechanically tolerable to resemble the paladin?

It’s convenient that Basic only includes the Life Domain, because it’s the one we want. The Cleric class is so heavily shaped by Domain features that we barely need to discuss anything else about it, but you’ve got Turn Undead and Preserve Life, which are close enough to the Oath of Devotion’s Channel Divinity and Lay on Hands that we’re going in a good direction.

If you’ve got a solid Strength and Wisdom, plus at least a decent Constitution, one really good paladin lookalike is Fighter 5/Cleric Everything Else, because at least you got that Extra Attack. In combination with your Divine Strike from the Life Domain, there’s a real resemblance to the Paladin’s combat routine taking shape, though you can’t dump spell slots for damage. Your spellcasting will far outstrip a paladin’s over the long run, as a 15th level Cleric has 8th-level spells, but holy aura does a surprisingly good imitation of the Oath of Devotion’s Holy Nimbus 20th-level feature. Everything else comes down to spell selection.

If you want a balance of spellcasting and combat that is more like the Paladin class, though, you want Fighter 11/Cleric 9, giving you fifth-level cleric spells and the Fighter’s Indomitable ability, which broadly resembles the paladin’s ability to succeed saving throws (but doesn’t share that ability with allies). That third attack per round would be quite enjoyable alongside Divine Strike, though you wouldn’t get that full combination rolling until 19th level at the earliest.

Another mechanical way one could present a paladin in 5e, without all of this multi-classing, would be a divine-casting subclass along the lines of the Eldritch Knight. If they hadn’t done so much to expand the Paladin’s themes, I would have expected WotC to do just that. Replace the Eldritch Knight’s protective and damaging spells with healing, protective, and damaging spells, and change Arcane Charge to some kind of Aura, and Bob’s your uncle.

If you’ve done all of that but you really miss the roleplay of Oaths, that’s some feat design waiting to happen. Just create an Oathbound feat that lets the player choose one of a few different codes, and as long as they faithfully keep its tenets, they get a modest benefit. If they break the tenets with malice aforethought, the feat flips to Oathbreaker, and gives different benefits, of a more unsavory nature, and draws the attention of the Dark Powers.

Having said all of that, I am sold on the Paladin justifying its existence in 5e, and it’s better represented here than in any prior edition. I know you’ve all been worried that this would bring an end to the series on the Paladin class – but no! There will be a bonus article next week, examining the Paladin class in the Rules Cyclopedia, Pathfinder, and 13th Age. They all have interesting things to contribute to the conversation.