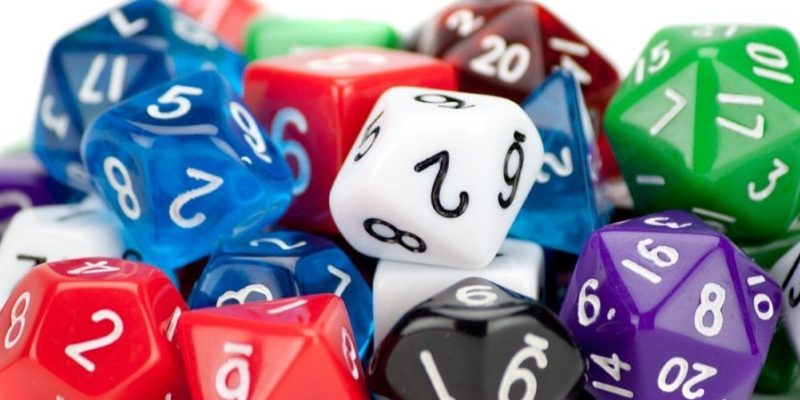 Here’s a question that every DM gets asked a hundred times: How do you roll stats/attribute scores? Doesn’t sound like a terribly tough question; but, depending on your players and the kind of avatars they are accustomed to playing, the answer to this question can be the foundation for the entire future of the character. I mean let’s face it, over time a Fighter with 8 Strength is going to get laughed at and a Wizard with 19 Intelligence is going to kick some butt. That’s just how the math works. So this week I thought I would look at some of the more popular, successful, and interesting variations on finding your perfect, or at least acceptable, attributes.

To start off, let’s have a look and see how it’s done “by the book”. According to the D&D 5th Edition Basic Rules PDF, the definitive system to use is the 4d6 System. It breaks down like this:

1) Roll 4d6, dropping the lowest number and adding up the higher three. Record the number.

3) Assign the six scores to whatever attributes best serve your character.

An alternate system mentioned in the Players Handbook is the Set Scores system. That is where you take these numbers: 15, 14, 13, 12, 10, and 8 and place them in any attribute scores you wish. This is meant to save you time and create an average, well-rounded character.

A third system mentioned in the Players Handbook is known as the Custom or Point System. Below is the excerpt directly from the source: 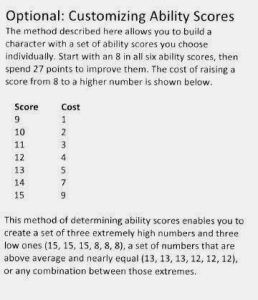 Personally, I have used all three of these systems in the past and find the first much more appealing than the other two. The averages that you get from the 4d6 System work out to be a little higher and sometimes even exceptionally higher. Of course, by using this system you are always going to have that one person who rolls four 10s and two 8s and will whine until the cows come home. Thus is the burden of being a DM.

For my own in-house games I have tinkered with the 4d6 System under the suggestions of others and I like to give my characters a little boost in order to handle my more challenging adventures. Here are two examples of what I have done in the past:

1) When rolling the 4d6, re-roll any 1s. This can really make the difference between an average character and an elite one.

2) After you have rolled a complete set of scores, roll a second or even a third complete set and take the set of your choice.

However, if you’re looking for something completely different, here are a few off-the-wall examples that I have pulled from the net:

But the award for the most original method I’ve encountered goes to the Blackjack System. This would be where the player is dealt out playing cards Blackjack style. They can choose to stay on any two cards, draw up to a maximum of five, and the total of the cards is their score for their ability. That means that some stats can even get as high as 21! But the flip side shows up when the player busts. If they do that, they are forced to take the minimum stat of 8. Not sure If I would use it but it’s certainly original.

Regardless what method you use, stat creation can be fun too! Working the numbers and trying to prognosticate what bonuses you will need can be extremely rewarding when you choose right and a bit painful when you choose wrong. Take your time and put some thought into it. The payoff might surprise you!  Additionally, here are a few tidbits of parting advice concerning stats:

For the Players: Try your best to not min/max all the time. I think a well-balanced set of attributes is one of the most underrated talents a character can have. Also, if you do end up having a low stat, remember that it isn’t always a bad thing. A good player can always turn a low stat into a great roleplaying opportunity. Here are some examples: the insanely strong warrior with the scarred face (low Charisma); the young, devout cleric who’s all thumbs (low Dexterity); and the stealthy, quick witted rogue who can barely lift his own backpack (low Strength). These are all great starting points for some wonderful backgrounds and character depth.

For the DM: Try to mix up your stat creation styles once and a while to keep things fresh for your players and keep in mind that creating a character can be a player’s favorite part of the game. I know that sounds weird but it’s true. Some folks find pure joy in bringing characters to life, so don’t make the mistake of dismissing it out of hand as a necessary evil. If you can’t find a way to make D&D fun and exciting from the first die roll when everyone is fresh and hopeful, how are you going to manage during the really difficult parts? Do your best to make every part of the game, even creating stats, count for something.