The Sha’ir, Part One and Only 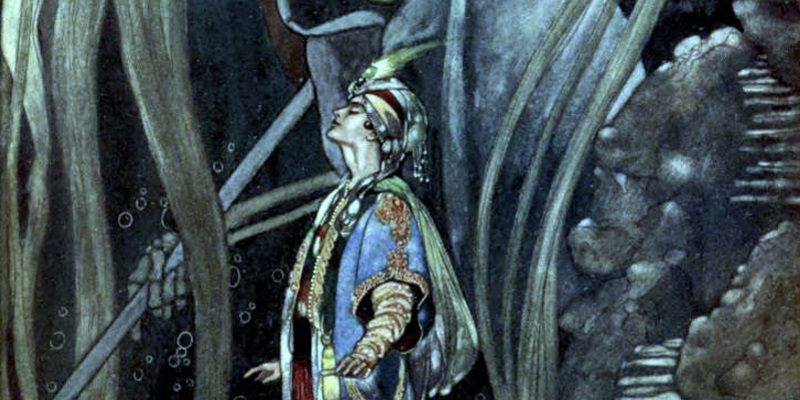 The Paladin, at last, is put to bed, and I can start on the Warlock. Except that there was no official warlock class in OD&D, 1e, or 2e, so I’ll be starting with its appearance in Complete Arcane, in 3.5e. Well, sort of… because 2e has this class, found in Al-Qadim, called the sha’ir. Sha’ir are based on the poets of pre-Islamic Arabia, who were believed to have mystical powers. In Al-Qadim, they derive their powers from their connection with a gen, and have unique means of summoning and interacting with janni and genies. In this way they are both a convenient single-article class, and a good lead-in to the warlock. This too is an arcane(ish) caster class dependent on a capricious entity.

Sha’ir are, to put it briefly, super weird. Of all things, it seems to me that they have the most in common with spellcasters in Earthdawn, without growing into insanely game-breaking engines of destruction. Or really ever getting all that great. Casting time is a problem, y’all. I’m getting ahead of myself; let’s break this down.

So what we have here is a class that starts off extremely unreliable, but with no way to “run out” of spells in a day. This is a terrible mechanic, but let’s be real, you’re just sticking it out for the high-level stuff. As you go along, you get some modestly relevant abilities. Suddenly, boom, 9th level, you’re unbelievably powerful, and it only gets crazier from there. The difficulty of negotiating with gen, jann, genies, and noble genies really drives home the similarity to 5e warlocks (much less so for 3.5e and 4e warlocks, but those editions gave very little attention to relationships derived from character classes.

The theme of the class as an artist-wizard who has a love-hate relationship with genies as patrons and servants is pretty awesome, and follows legendary sha’ir pretty well. With a cleaner set of mechanics, this could be pretty great. So… does the Complete Sha’ir’s Handbook have anything to offer?

Yes, Virginia, There Is a Complete Sha’ir’s Handbook

Because why wouldn’t there be?

It is not here to make life better for sha’ir, let me tell you that.

It is here to add more roleplaying restrictions and burdens to the interactions between sha’ir and gen. In theory, these are details to enrich the experience. In practice, it feels in every way like discouragement: more ways to offend the gen and lose your class abilities.

The book introduces new rituals to power up your gen and improve their combat survivability. These rituals are punishingly difficult – the text calls out that they are basically impossible and should not be attempted without casting all of the buffs that improve your ritual casting, because seriously, you’re not going to succeed and you might die of dehydration. Basically, it’s a case of requiring too many consecutive successful rolls in order to actually succeed; you can fail a little bit, but failure penalties stack up to “impossible” in a real hurry. These rituals have all of the problems of 4e skill challenges with none of the good parts. On the other hand, if you survive, you can give your gen some crazy-awesome abilities and make them into useful team members, rather than just the obvious, vulnerable focus that all of your spellcasting depends upon.

There are new kits in this book as well – it’s 2e, what did you expect? – but they are more like independent spellcasting classes than kits. Well, from a 5e perspective, they’re really new subclasses of wizard, or possibly other arcane caster classes.

Despite its name, this book is mostly not about sha’ir. It is mostly about arcane casters in Al-Qadim as a whole, and about adding restrictions and nitpicky details. I think it does more to teach DMs to be insufferable jerks to their players than anything else. Learn from this book: learn what not to do.

The good side – there is one, however slim – is that it gives a sense of what a sha’ir’s life is like outside of combat and high-conflict situations, such as adventures. Sha’ir get to interface with a part of Zakhara that is unknowable and terrifying for everyone else, which is another thing that makes them similar to warlocks.

If you’re running 5e, you could absolutely offer Genies as homebrewed warlock patrons, and maybe spell-summoning as a homebrewed pact. Their spell list should possibly be tweaked for theme. If there are going to be genasi in your world, do yourself a favor on the story side and make genies a central story element. Genasi as distant offspring of genies, just as tieflings are distant offspring of fiends, can only improve their racial story.

Next week: the Warlock!

Post script: I realize that there was a sha’ir released for 3.x in some Dragon Magazine article. I… don’t think I care enough to hunt it down and write about it. Disagree? Convince me in the comments box.

Post-Post Script: To my endless chagrin, my readers have triumphed over my reluctance, and there will be a surprise Part Two, in which I expect to cover the 3.x and 4e Sha’ir. In other news, I learned today that there is a 4e Sha’ir. Yeah, I was as surprised as you!

Thank you to all of my readers, for taking enough of an interest in these humble offerings to argue with me.