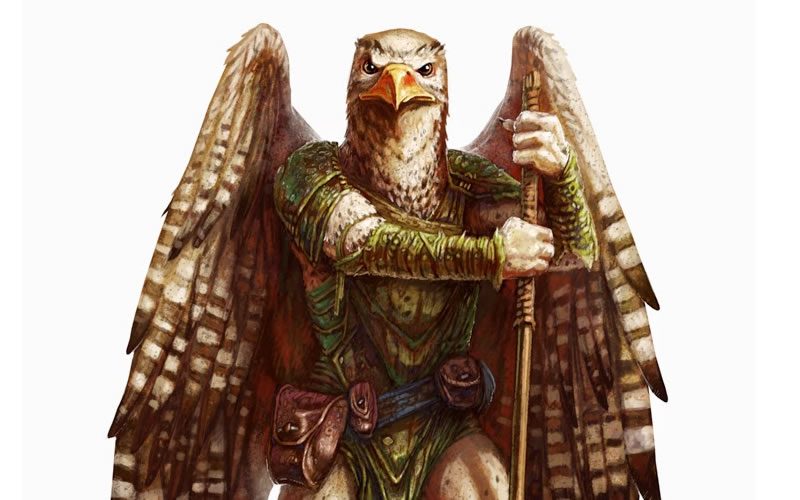 The aarakocra were one of my favorite monsters from the original Fiend Folio. They, along with the bizarre and oft-mocked flumph, were one of the only good races in the book and seemed ripe for heroic storytelling. Unfortunately, they weren’t available to the average player as a race (at least until Dark Sun) and creating appropriately balanced new races in the early editions was challenging. It’s a little thing, but opening the 5th ed Monster Manual and seeing the aarakocra as the first monster helps this edition find a place in my gamer heart.

The Elemental Evil Player’s Guide
Though this build was posted first at www.gameschangelives.com, WotC has since offered up their own version of the aarakocra. Whether you decide to use this version or their official write-up, I’m hoping the background information and the various archetypes will provide you something fun for your next avian game.

A Note on Flying
For those concerned about flight as a game breaker, two things should be noted. First, fly is a generally available spell by 5th level and its benefits outweigh an aarakocra’s natural flight in speed and the ability to hover. Second, I have included specific (though not overly cumbersome I hope) rules that simulate how the flight of a creature with a 20 foot wingspan would be limited in day-to-day life.

The Monster Manual does a good job of presenting the classic image and culture of the aarakocra and you can reference it for inspiration about where your character comes from and how the general populace might see them.

Personality
Aarakocra are commonly perceived as tenacious hunters, aloof and quiet, and overly serious. This perception is born from their most common interactions with other humanoid races–undermining evil organizations. Aarakocra are staunch enemies of cults of Elemental Evil and the fiend lord Pazuzu and let very little distract them when they are close to unraveling their enemies’ plans. However, aarakocra are an intelligent, kind and good-humored race whose serious nature is reserved for combating their enemies. They find little in common with most earthbound races outside of the temporary alliances against evil, but those who have taken the time to see past their differences have discovered that aarakocra make steadfast allies and lifelong friends.

Most aarakocra find no need for excess wealth, believing that an individual or family should use only what they need to thrive in their chosen profession and give all excess to others, freeing them from the burdens of survival in order to better themselves. On a practical level, this means that an aarakocra with money to burn will often spend it on their friends, and even strangers, without second thought, creating both friends and enemies. Though some have been “taken advantage of” by less scrupulous humanoids, the aarakocra simply don’t care. At times an aarakocra’s attitude has lead those same unscrupulous humanoids to either question their own motives and make life choices for the better, or push their luck beyond the tolerance of their “benefactors”.

Aarakocra are particularly confused by the dwarven, halfling and human passion for gems and gold. Oddly enough, those aarakocra who have befriended earthbound humanoids in the past have found that the same dwarves, halflings and humans who confuse them so greatly make the best of friends. Though elves timeless perspective gives them a more enlightened view of the fluidity of wealth, aarakocra find elves to be condescending and rude, while many elves assume aarakocra are primitive at best, ignorant at worst.

Society
The largest aarakocran realm of Aaqa is a meritocracy, ruled by a council known as the Wind Dukes. Smaller aeries, or villages, can be found nestled throughout isolated mountain ranges across the Material Plane. Many of these follow the meritocracy model of Aaqa, though some have isolated themselves from Aaqa and follow their own path.

Adventuring
Aarakocra are born and bred to oppose the forces of Elemental Evil. The majority spend their lives defending the tranquil realm of Aaqa located in the Elemental Plane of Air, though many take the fight against evil wherever they must, including the Material Plane.

Members of every class can be found among the aarakocra. Feral warriors known as rocs follow the barbarian path of the berserker, though some totemic barbarians exist as well. Aarakocra bards are well-known for their singing voices and possess members from both of the core colleges. Clerics gain their divine abilities, not from gods, but from powerful elemental beings, and may choose their domain from Knowledge, Light, Nature and Tempest.

Druids of both core Circles exist (see Druids below). Aarakocra fighters are charismatic leaders skilled in working as teams (misnamed “flocks” by other humanoids), so are commonly trained as battle masters, though a variation of the eldritch knight, known as storm lords (see Fighters below), act as elite warriors and bodyguards to important leaders.

Aarakocra monks are masters of maneuverability, using their wings and talons to great advantage both in the air and on the ground. They follow both the open hand and elemental traditions, though a small society of shadow monks are rumored to work for cultists of Pazuzu. Paladins are rare among the aarakocra, though not entirely unknown, and follow the Oath of the Winds (see Paladins below). Rangers of both archetypes are common among aarakocra, tracking and destroying the Duke’s enemies.

Rogues are the rarest class among the aarakocra. Those that do take levels in the class follow the thief archetype, though they call themselves infiltrators (see Rogues below). When an aarakocra is born with arcane magic in their blood, they follow the wild magic sorcerer blooodline. Those rare warlocks who bind themselves to otherworldly powers are drawn to certain avian archfey or the fiend lord Pazuzu. Though they may follow any pact, warlocks are often granted the Pact of the Chain, choosing imps, quasits or pseudodragons as their familiars. Wizards among the aarakocra study all arcane traditions except necromancy.

Ability Score Increase. Your Dexterity increases by 2 and your Wisdom increases by 1
Age. Aarakocra reach maturity by age 3. Compared to humans, aarakocra don’t usually live longer than 30 years.
Alignment. Aarakocra are raised to oppose the forces of Elemental Evil and lean toward good alignments. Personal freedom is at home beside their loyalty to the Wind Dukes of the Elemental Plane of Air, therefor most aarakocra are neutral good, though lawful and chaotic members of the race are not uncommon. Though rare, evil members of the race are sometimes recruited or blackmailed into working for elemental cults or for the fiend lord Pazuzu.
Size. Aarakocra are smaller and thinner than the average human, ranging from 5 to 5-and-a-half feet tall, and weighing between 90 and 120 pounds. Their wingspan is their most impressive feature, averaging 20 feet. Your size is medium.
Speed. Your base walking speed is 25 feet. You also have a fly speed of 30 feet (see Wings below)
Keen Senses. You have proficiency in the Perception skill and may double your proficiency bonus on any skill check that involves sight.
Child of Aaqa. Aarakocra have advantage on saving throws against lightning and thunder damage, as well as against spells or powers that manipulate air, such as gust of wind, wind wall, or an air elemental’s whirlwind power.
Wings. An aarakocra’s impressive wingspan allows them to fly at great speeds, but they may not hover and may only carry a light load. In order to fly, an aarakocra must have a minimum of 10 feet of open space on either side of them and 30 feet of open space around them. An aarakocra who has been restrained, either by a spell, net, lasso, grapple or other effect may not fly. An aarakocra is also prevented from flying while wearing medium or heavy armor or while carrying a heavy load. At 5th level, your fly speed increases to 50 feet.
Dive Attack. An aarakocra who flies at least 30 feet during a round, and has descended at least 20 feet at the end of that movement, deals one additional die of damage with the first melee attack made during that round.
Talons. Aarakocra possess powerful talons on their feet. They may choose to deal 1d4 slashing damage with their unarmed attacks instead of the normal 1 point of bludgeoning damage. Aarakocra monks and those trained in similar forms of unarmed combat, deal unarmed damage as their class indicates, but may choose to deal either bludgeoning or slashing damage with each unarmed attack.
Summon Air Elemental. Five or more aarakocra may summon an air elemental as detailed in the Monster Manual.
Languages. You can speak, read and write both Common and Auran.

Though any class is available to aarakocra, several classes have new options that are ideal for aarakocra characters.

Wild Shape
Druids who possess fly or swim speeds may Wild Shape into creatures that possess the same modes of movement.

Bonus Cantrip
In addition to the core druid cantrips, you may select your bonus cantrip from ray of frost or shocking grasp. This cantrip is considered a druid spell. [I recommend these options be given to all druids as they represent natural attacks quite well.]

Land’s Stride
This ability includes difficult terrain inflicted on flying creatures by spells such as wind wall and environmental effects such as heavy winds.

Aarakocra fighters who follow the eldritch knight archetype are known as storm lords. The class features remain the same with the exception of Spells Known and Spellcasting Ability, as follows.

Spells Known of 1st-Level and Higher. Storm lords select their spells (except cantrips) from the druid and ranger spell list in place of the wizard spell list. The limitations to spell selection involving abjuration and evocation spells remains. All other aspects of this feature remain unchanged.

Spellcasting Ability. Wisdom is your spellcasting ability for your spells, since you call on the spirits of nature to power your spells. All other aspects of this feature remain unchanged.

Paladins (Oath of the Winds)

Channel Divinity
Nature’s Wrath. The foe is ensnared by powerful winds instead of vines. Otherwise, the power functions exactly as the Channel Divinity power of the Oath of the Ancients.

Aarakocra rogues that follow the thief archetype are known as infiltrators and are rarely involved with criminal elements. Infiltrators act as scouts, destabilize cults, infiltrate temples of Elemental Evil, and sabotage the resources of their enemies on any plane. The class features remain the same with the exception of Second-Story Work, which is replaced by Agile Flier.

Agile Flier
Starting at 3rd level, you can use your reaction to dodge ranged attacks that you would normally be hit by, including missile traps, ranged weapons, and any damaging spell that requires an attack roll. When you do so, the damage you take from the attack is reduced by 1d10 + your Dexterity modifier. If you are flying at the time you use this ability, you may add your rogue level to the roll.