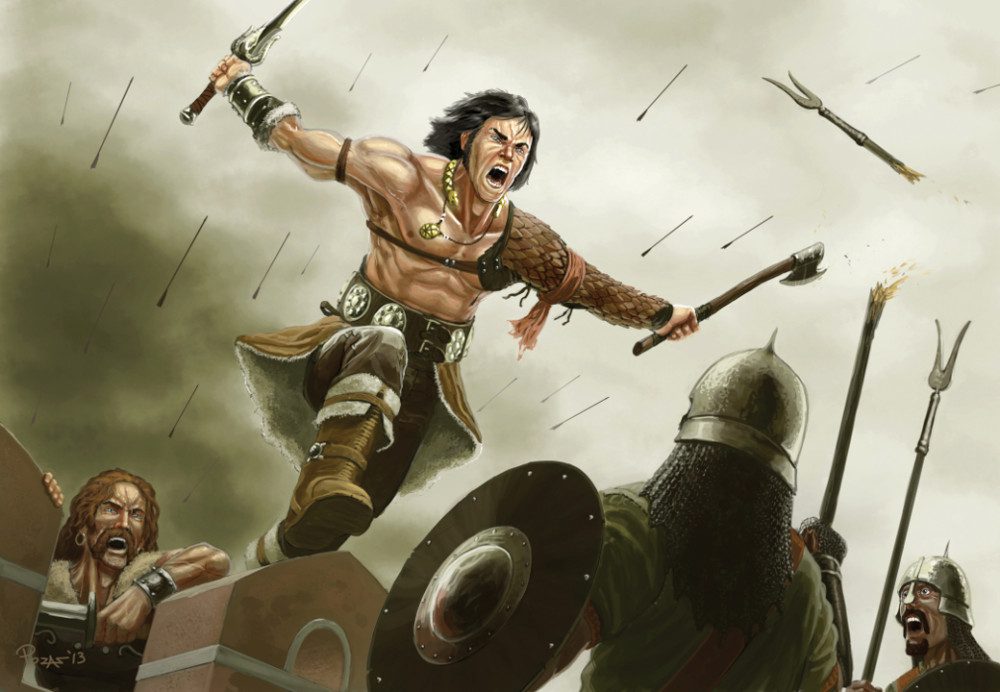 This article is about informing you about the Kickstarter that is currently nearing completion for converting Primeval Thule for D&D 5th edition and adding a lot of new content. I hope to give you some informative background on the Kickstarter campaign, and some details from one of the designers, Rich Baker, on what will be different with this version.

The campaign is currently funded at $39,906 and has surpassed it’s original $15,000 goal.  Also there are several stretch goals that have already been reached. Being a Deluxe Thule backer myself, the more support and crowdfunding that this project sees, then the better a product that Sasquatch Game Studios can produce. So it’s win-win for everyone if we all group together and help out these great game designers.

Speaking of great game designers, the Sasquatch crew has  been bringing in top talent for this and many of their other Sasquatch Game Studio projects: Ed Greenwood, Robert Schwalb and Steve Winter.  Also great artist like Tood Lockwood & Claudio Pozas are working with them.

They have experience! Sasquatch is very familiar with the D&D 5th edition rule set with experience creating the adventure campaign, Princes of the Apocalypse for Wizards of the Coast. There will be several exclusive stretch goal content that is created from the Kickstarter with new pages and new adventures.

And now the most important bit of information, the link for the Kickstarter Project: https://www.kickstarter.com/projects/809579963/primeval-thule-5e

Go there, and lets get some more people on-board and break some more of the stretch goals! 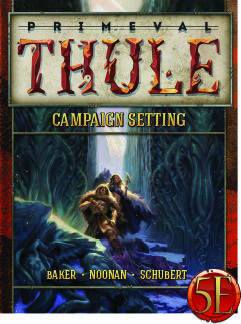 Inspired by the literary traditions of sword-and-sorcery adventure, lost worlds, and fantastic horror, the land of Primeval Thule is a savage, intense campaign setting. This is a world of barbarian freebooters and dark magic, star-spawned monstrosities and elder gods, fabulous treasures and mind-blasting terror. Hunt saber-tooth cats in steaming jungles—explore ancient cities buried in the relentless ice— battle dark cults and bloody-handed tyrants in decadent city-states. A world of glory and riches is yours to seize!

Thule’s influences are classic pulp fantasy stories such as Robert E. Howard’s Conan stories, H.P. Lovecraft’s Cthulhu mythos, and Edgar Rice Burrough’s tales of savage worlds, as brought to life by the unforgettable illustrations of artists such as Frank Frazetta and Roy Krenkel. These lurid stories and images of brawling action and cosmic horror are the bones, blood, and sinews of the Primeval Thule campaign—and it’s fantasy adventure the way it was meant to be played. Want to read about Thule for yourself? The Primeval Thule Traveler’s Guide, a 36-page PDF that serves as our introduction to this awesome setting, is now available for free at DrivethruRPG

You can also check out some of the book’s art, and even see sample pages, in our Primeval Thule Art Gallery.

Can you tell people more about Primeval Thule? 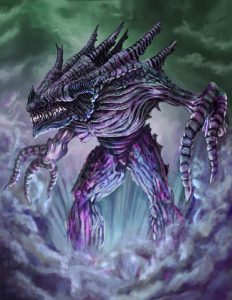 Basically, modern fantasy (fiction, games, movies) is built on two pillars: world epics that take you to a land of knights, castles, wizards, etc.;  and “sword and sorcery,” the genre of adventure stories in fantastic settings. Most fantasy RPG settings lean toward the classic world epic, which is great. We love those stories too. But sword and sorcery is a genre that’s all about ACTION. The stories are episodic, fast-paced, savage, lurid, bloody, and sometimes sordid or a little salacious. You’re not saving the world, you’re saving your own neck or staking your life on a bold get-rich-quick scheme. The stakes are personal and the pace is intense. That’s the experience Primeval Thule brings to your gaming table.

The “elevator pitch” we give to describe Thule is simply, “This world is Conan vs. Cthulhu.” We don’t mean that literally, but it’s a good starting point. Robert Howard and H.P. Lovecraft knew each other and wrote for the same magazines in the ‘20s and ‘30s. They shared ideas and referenced each others’ works. There’s an implied backstory to Lovecraft’s modern Earth that looks a lot like Howard’s Hyborian Age, and that’s AWESOME. (In fact, Clark Ashton Smith’s Hyperborea stories are pretty much exactly this setting.) So, we set out to capture a FRPG experience that mixed up savage untamed lands, bloody handed barbarians, and Mythos horrors in a setting that emphasized episodic, personal-stakes adventures for larger-than-life PCs.

We’re fans of D&D in all its incarnations, so we’ve already published versions of Thule for Pathfinder, 13th Age, and 4th Edition Dungeons & Dragons. But we’re really excited to produce a version of Thule for 5e because 5e happens to play exceptionally well for fast-paced, low-magic settings. (If nothing else, the pace of combat is great for Thule!) The 5e backgrounds are an excellent stepping stone to Thule’s character narratives, and we get to introduce Mythos monsters like mi-go and moonbeasts along with Ice Age beasts and great villains to the 5e rules set.

How can you publish a 5e book?

We are publishing Primeval Thule Campaign Setting V under the 3rd-Edition era Open Game License. Because Thule is a setting, not a rules system, we have a comparatively light rules burden for the setting. Everything we need to do to ensure compatibility with the new edition fits comfortably within the bounds of the OGL.

What’s new in Thule 5e that wasn’t in the original Primeval Thule kickstarter?

Primeval Thule 5e takes the core of the book that we created for Pathfinder/13th Age/4e in our last kickstarter, and updates the mechanics of the book (monsters, spells, items, etc) for the latest game system. We are reorganizing the book, as well, by taking the mechanical elements out of the appendix and putting them directly into their respective chapters.

This effort will free up a couple of pages within the book, which we will fill with new content. For example, we’re including a new Great Old One in the Monsters & Villains chapter.

Through our stretch goals, we will also be creating new adventures, and a PDF product we like to call the Thule 5e Companion, which will collect any new material we write for the setting. As a stretch goal, it is even possible that we might increase the size of the book to include the Companion content directly.

AcadeCon 2015: Into the Wilds – Kickstarter

Updated! Out of the Abyss Previews – ...