Kender for D&D 5th Edition: A Reluctant Test of Design 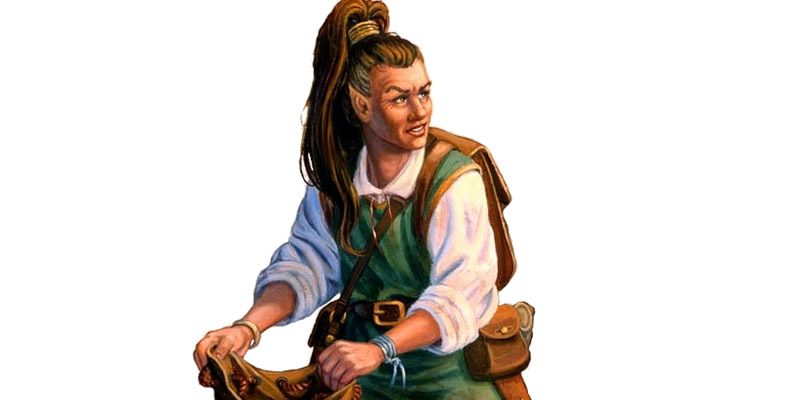 I’m am confident there are players in the world who know how to bring kender into a game and make that game more fun and interesting for everyone. I haven’t met them [EDIT 9/20/15: I’ve now met one. Senda from the She’s a Super Geek podcast happily spoke of her love for kender on Jim McClure’s brilliant Talking TableTop, and after spending time talking to her I would happily welcome her kender at my table]. I love Tasselhoff in novels, but at the table I find the kender’s natural strengths are used more to mess with other players than support the group story. With that in mind, I attempted to use interesting mechanics to support the flavor of the kender’s fun and entertaining traits without forcing players to outright steal every chance they get.

This kender build was first presented on my personal site, www.gameschangelives.com on 11/21/14 and is being reposted for Rich’s Gameroom.

For more on design choices, see Behind the Development below.

Unlike other halfling races, kender are childlike and naive to the extreme. This childish innocence gets many kender out of trouble, though more often gets them into it.

ADDENDUM: I’ve recently been informed that though kender are effectively halflings, they have an odd origin in the Dragonlance universe (gnomes affected by the passing of the “Greystone”?).  As such, they are technically not halflings. This doesn’t appear in any of the research I read for this post. I will make a few adjustments when I get time. Thanks for letting me know.

ADDENDUM 2: From reader, Ben Eastman: “It would appear that there are three possible explanations for kender, although the third came very late in the Dragonlance cycle (a novel from 2009). I think that designing kender as a halfling subrace makes perfect sense outside of Krynn, since they are halflings-but-not-hobbits. In Krynn, they would just be their own standalone race.” I agree. Thanks, Ben, and others for letting me know.

From the Kender Wiki:

“Within the game world, kender names are chosen from a wide range of sources such as recent events, an existing relative, or from items found in kender pouches, such as Bearchase, Lockpick, and Fruitthrow. As children, they constantly ask questions and come to rely on family and friends for needs, and they begin to take part in community activities. As they age, kender children gain education by hearing stories, desiring to acquire new skills, and playing games. They also begin handling and wandering. As kender reach the adolescent and teen-aged years, they become more active participants in Kender Moots, social gatherings where the youth can show off their newly found skills in games and demonstrations. As they near adulthood, kender experience intense wanderlust and leave home.

“Most kender spend their entire adult lives wandering around the world. Most of the population of Krynn has been exposed to the adult variety of kender, and as such have adapted the word kender to mean thief, rogue, or cutpurse. Kender take great offense to these epithets, especially the last. The Annotated Chronicles cites the Dragonlance Adventures, which states, “Most Kender are encountered during wanderlust, a particular phase in a kender’s life that occurs for most kender during their early 20s. Wanderlust may happen for many years … and is responsible for spreading kender communities across the continent of Ansalon.”

As a kender halfling, you gain the following benefits in addition to the benefits of the halfling race.

Alignment. Unlike other halflings, kender lean toward chaotic alignments rather than lawful, though their kindness and gentility guide them toward good alignments.

Age. A kender’s natural lifespan is about 100 years. They age slowly, remaining childlike in comparison to other races even when their bodies slow down. Kender view death as the next great adventure, and do not linger long in sadness after the passing of a loved one.

Speed. Unlike other halflings, your base walking speed is 30 feet.

Bravery. A kender’s childlike innocence prevents them from fully grasping the consequences of their actions, providing them with the overconfidence of human youth. Kender are immune to the frightened condition. Though they feel no fear for themselves, they can and do fear for the safety of their friends and family.

Taunt. Kender are naturally skilled at perceiving and taking advantage of the psychological weaknesses of their enemies (and sometimes their friends). As an Action, you can force a target within 30 feet who can hear you and understand your language to make a Charisma saving throw against a DC equal to 8 + your proficiency bonus + your Charisma modifier. On a failed save, the target cannot take reactions until the beginning of their next turn and gains disadvantage on the next attack roll or ability check they make before the end of their next turn. The creature may also target the kender with its next attack, either physical or verbal. A creature who fails their save gains advantage on subsequent saves against this ability until they take a long rest.

Curiosity. The innocence of the kender knows no bounds. As such, kender often “acquire” objects that are not theirs. Though willful thievery is considered morally wrong by most kender, and to be called a thief a great insult, kender have no problem with handling other people’s property that interests them. You gain proficiency with Sleight of Hand checks and begin the game with three trinkets. In addition, as an Action, you may search through your belongings to find any single item which you have picked up in your travels. This item will be worth 2gp or less and weigh no more than 2lbs. You may not use this ability again until you take a long rest.

Reputation. A kender’s natural innocence and questionable reputation make them terrible liars and their childlike rage invokes more laughter than fear. You make Deception and Intimidation checks at disadvantage.

Kender outside of Dragonlance: Kender are the only halfling subrace on the planet of Krynn. If you are not running a Krynn-based game and would like use kender as a subrace alongside lightfoot and stout halfings, I recommend reverting their speed back to 25 feet and their Bravery racial trait to the standard halfing. You may also remove their Reputation trait to compensate for the loss of these abilities depending on the nature of your campaign.

The Taunt racial trait is a cornerstone ability of the kender. At first I thought of giving them access to the vicious mockery cantrip but didn’t for two reasons, 1) though several races gain cantrips as racial traits, none deal damage, and 2) their taunting skills aren’t magical.

Between the current halfling’s advantage on fear saves and ability to reroll 1’s on saves, they are already highly resistant to fear. I decided to upgrade that to immunity simply because it is such an inherent part of the kender psychology. For some reason, kender are faster than standard halflings. I’m not sure why this became a part of the race, but an increase in speed from 25 feet to 30 feet isn’t as significant as in previous editions. Still, it is an advantage. As with Bravery, changing this trait was a toss-up and if you are allowing kender alongside other halfling subraces in your non-Krynn game, I recommend removing both these advantages.

Kender spellcasters are fairly rare, so imposing disadvantage only on concentration checks isn’t enough to balance out some of the other advantages they have over normal halflings. Allowing the DM to impose disadvantage on one attack roll, saving throw or ability check per long rest puts a little power into the DM’s hands when dealing with a kender’s penchant for getting themselves and their party members into trouble, while still playing to the kender’s roleplaying strengths. A player who wants to break stereotype and play a kender wizard may pick up the War Caster feat.

Kender “curiosity” is described well in the Kender Wiki:

“Kender are described as not believing that there is anything morally wrong with handling others’ items, although the habit may land them in considerable trouble with the owner of an object. In addition, they do not tend to pocket things like money, gems, and the like, as they are depicted as having little concept of monetary value. Kender oppose actual thieving vehemently, and consider being called a thief a great insult to their dignity.

“As a side effect of these characteristics, kender can be difficult to play within the role-playing game, as their lack of interest in monetary gain is “a virtual anathema” to the manner in which characters of many other races are typically portrayed. It was recommended in The Mists of Krynnthat kender be employed as non-player characters, with their kleptomania providing a convenient means for those running the game to introduce objects at critical times.”

It was this concept that inspired the Curiosity trait’s feature of starting with three trinkets and finding small, inexpensive objects among the kender’s gear. By allowing this trait (and changing the oft-used name Kleptomania to Curiosity), a kender PC can have the feel of object-acquisition without being encouraged to steal everything in sight–a penchant that has derailed numerous storylines.

One might think the disadvantage imposed by their Reputation would also apply to Sleight of Hand checks as well. Though the kender’s reputation for kleptomania is near-universal, they are so good at acquiring items on the sly that they do not make these checks at an inherent disadvantage like Deception and Intimidation checks (though disadvantage may be imposed by the DM for other circumstances, such as through the Distraction racial trait or certain spells and effects).

The hoopak (aka: halfling slingstaff) is a weapon unique to the kender. A versatile weapon, the hoopak may be used as a staff, spear or sling.

A kender’s inborn wanderlust forces them into the world at a young age. Common backgrounds for kender characters include Entertainer, Folk Hero, Hermit, Outlander, Sailor, and Urchin. Though it is common for a kender to have the Thief archetype, it is very rare for one to possess the Charlatan or Criminal background. Kender curiosity lend them to develop the skills and features of a rogue (thief), but rarely leads them to blatant criminal intent. Kender Acolytes, Sages, and Soldiers are rare, while Guild Artisans and Nobles are rarer than Charlatans and Criminals.

Kender are naturally drawn to agile and charismatic classes, such as rogues and bards, though a few are able to fight their attention deficits enough to study wizardry or to follow the divine paths of the cleric or druid. Kender rangers, though unusual, are not unheard of, though barbarians, monks, paladins, and sorcerers are rare to the point of nonexistance. The kender’s innate naiveté could potentially lead them to being manipulated by the unseemly patrons who empower warlocks, though it’s just as likely that their childlike innocence would steer them away from temptations of power.

If you’re running a Dragonlance game in the world of Krynn, make sure to check out the Minotaur playable race, and my series on draconians, both evil and good.