4 Historical Battles To Inspire Your D&D 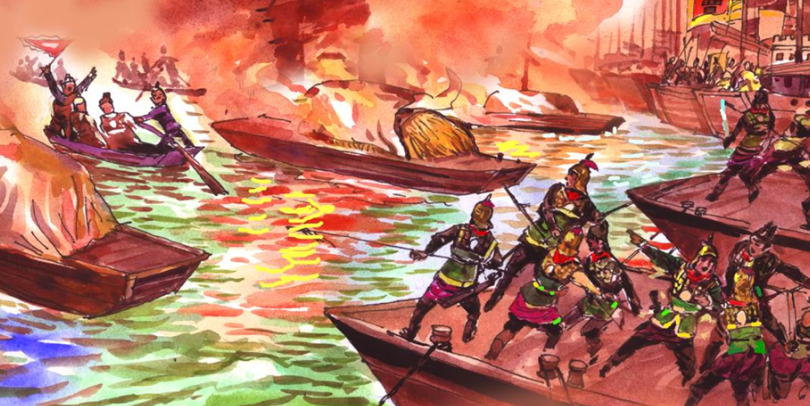 History is no stranger to epic battles that have changed the world for better or for worse. From ancient times to World War II, armies have always found themselves facing daunting odds and making immeasurable sacrifices to succeed. Also, when I compare some of the largest battles in the history of fantasy fiction with some of the largest battles in actual history, the latter often seem more impressive. When Octavian Caesar defeated Mark Antony and Cleopatra at the battle of Actium, their naval battle included over 500 galleys. I’ve never read any fantasy book with those kinds of naval numbers. And when the Rohirrim arrive during the Battle of Pelennor Fields in Return of the King, they charge with 6000 horse. However, during the Battle of Vienna (1683) the alliance of Polish, Austrian, and German cavalry numbered near 20,000. I’ll bet that was a sight to see!

So, with all of this in mind, I’ve looked into four historical battles that can inspire D&D and other roleplaying battles in countless ways. These battles were all large, significant, and decisive. I’ve also picked them out due their unique natures and what I’d like to call “playability”. That is to say that all of these would be easily convertible into a D&D or roleplaying situation. I’ve also deliberately picked two from ancient history and two from modern times for contrast. Here they are in chronological order:

Battle of Thermopylae (480 BC)

Despite what you might have seen in the movies, the Battle of Thermopylae was not just 300 Spartans defending the “Hot Gates” against an endless Persian army. Nor did King Leonidas march knowing that he would not return. In fact, more than 7000 Greeks marched against 100,000-300,000 (history is not clear on the exact number) Persians in the summer of 480 BC and their intent was to hold the Persians in place long enough for Greek reinforcements to arrive after they had defeated the Persian navy at the Battle of Artemisium which was taking place simultaneously. At first, the plan went well. The Greeks held off the vastly superior and numerous Persian forces for seven days, three of which were almost constant battle. Regretfully for them, a local by the name of Ephialtes betrayed his country and revealed a small path in the hills the Persians could use to outflank the Greeks. Realizing in time that the situation was suddenly dire, King Leonidas ordered a full retreat for the majority of the army while he personally lead the rear guard of approximately 1500 men, 300 of which were Spartans. That rear guard was annihilated almost to a man, but they afforded the remaining forces of around 3000 to successfully retreat. The implications for D&D and roleplaying here are vast and exciting. The real question is, from my perspective, do I let the PCs escape or do they fight it out until the bitter end?

This was one of the most famous battles in Chinese history and it’s not hard to see why. A northern warlord by the name of Cao Cao decided to step in during the period of decline for the Han Dynasty and attempted to remake the country in his own image. At first, he seemed unstoppable and managed to gain control over many of the Northern Provinces. His luck changed however when he decided to move southward and take on two allied warlords named Liu Bei and Sun Quan. At the time, Cao Cao was boasting that he had 800,000 men at his command while the southern force barley numbered 50,000. Daunted by that claim, there was much talk about surrender. However, one of Sun Quan’s Generals, Zhou Yu, had scouted Cao Cao’s army and estimated that the actual number was closer to 250,000 with a significant number of men (as many as 80,000) who had been captured in previous battles and forced into service, thus they were not very loyal. After seeing this, Zhou Yu was confident that the battle could be won with proper strategy and a bit of luck. It all unfolded in three stages, each one an epic disaster for Cao Cao and his northern army. The first stage included the southern forces catching the northern vanguard by surprise and tired after their long march. The vanguard was almost wiped out and forced to retreat back into the heart of the army. The second stage was mostly a naval affair fought by river galleys on the Yangtze River. The southern force employed a ruse where they feigned surrender and, when the northern force lowered its guard, they sent in numerous fire ships to great effect. The northern navy was thrown into fire and chaos which provided an excellent distraction for a land force, led by General Zhou Yu, to swoop in and hit the northern army hard. The result was exactly what the southerners were hoping for and eventually Cao Cao’s army was in full retreat. The third stage was a series of catastrophic skirmishes with the northern army attempting to retreat and regroup and the southern army on their heels and giving them no time to do so. By the end, Cao Cao did manage to escape with his life but his army was only a shadow of its former self and he was never again able to challenge the southern provinces. Converting this multi-stage battle into a D&D campaign would be epic. You could have the PCs as soldiers winning the fight, soldiers for the losing side facing a humiliating defeat, or allowing the PCs to run the show which could lead to some very interesting and potentially different outcomes.

This battle is regarded by most to be both the largest and most significant battle of the Eastern Front Campaign. Lasting close to six months, it is also holds the dark title of the highest casualty battle in human history with estimates having the German side losing over 800,000 troops and the Russian side losing over 1.1 million.  That’s an average of 425 deaths an hour over the six month period. Essentially, Stalingrad was the Russians’ final line of defence to stop the Germans from reaching the center of their country and what may have been a Russian surrender. It was brutal urban fighting and most of it done in wet winter weather. Some of you may also remember the movie Enemy At The Gates with Jude Law. That movie, while having a fictional storyline, does a fairly accurate job of depicting the desperate mire the Russian side was in at one point and how degraded the city of Stalingrad eventually became. From a D&D point of view, creating an urban battleground for a prolonged and grinding fight is something I have always wanted to do but have yet to pull off. I think it could be very well done with enough imagination and planning.

Perhaps the most famous battle in the Pacific Theatre, the island of Iwo Jima was both strategic and symbolic to the Japanese war effort and was unsuccessfully defended from American invasion from February 19 to March 26, 1945. Over the course of five weeks of intense fighting, the American force of roughly 100,000 suffered near 7000 deaths and over 19,000 wounded; while the Japanese force of about 21,000 had over 17,000 deaths before surrendering. But while these numbers are nowhere near the size and scope of some of the other battles in the Pacific, it is the nature of this fight that makes it interesting and unique. The Japanese force had more than a year to prepare their defenses and, as a result, created hundreds of tunnels, bunkers, artillery positions, sniper nests, and hidden fox holes. Additionally, they stock piled food, water, ammunition, and other supplies so they could hold out for as long as three months if necessary. Lastly, and perhaps most significantly, the Japanese devised a new defense strategy especially for Iwo Jima totally contrary to their regular thinking. Instead of concentrating their fire on the beachhead in an attempt to push the Americans back into the sea after landing, just as the Germans had attempted to do in Normandy, they would allow the American force to reach the island’s interior unscathed before ambushing them point blank to inflict maximum casualties. Had the two forces been equally matched, the Japanese would have pulled off a great victory; however, with superior numbers (5 to 1) and their supply lines running smoothly, it was only a matter of time before an American victory was declared. Looking at this conflict in D&D terms, I can see a DM running this battle for his or her PCs from either side of the conflict. I think it would be intriguing to play as either the defenders or the invaders, with caves, tunnels, beaches, and forest terrains to choose from all contained within an island setting.