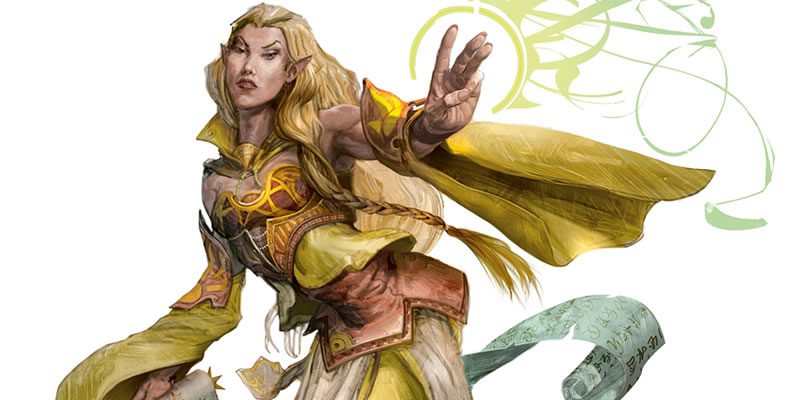 There is a new article on D&D Wizard’s of the Coast website by Jeremy Crawford. It has rulings on the Elf trance, thief fast hands, reducing exhaustion, combat, spells and magic items. The Sage Advice comendium has been updated with these new rulings: http://www.media.wizards.com/2015/downloads/dnd/SA_Compendium_1.03.pdf

Here is a link to the article http://dnd.wizards.com/articles/news/rules-answers-september-2015

Below is the excerpt from the article.

This month, we touch on several rules questions that have come up quite a few times over the past year.

If you have questions for a future installment of Sage Advice, please send them to sageadvice@wizards.com, or reach me on Twitter (@JeremyECrawford).

Does the Trance trait allow an elf to finish a long rest in 4 hours? The intent is no. The Trance trait does let an elf meditate for 4 hours and then feel the way a human does after sleeping for 8 hours, but that isn’t intended to shorten an elf’s long rest. A long rest is a period of relaxation that is at least 8 hours long. It can contain sleep, reading, talking, eating, and other restful activity. Standing watch is even possible during it, but for no more than 2 hours; maintaining heightened vigilance any longer than that isn’t restful. In short, a long rest and sleep aren’t the same thing; you can sleep when you’re not taking a long rest, and you can take a long rest and not sleep.

Here’s what this all means for an elf. An elf can spend 4 hours in a trance during a long rest and then has 4 additional hours of light activity. While an elf’s companions are snoozing, the elf can be awake and engaged in a variety of activities, including carving a lovely trinket, composing a sonnet, reading a tome of ancient lore, attempting to remember something experienced centuries before, and keeping an eye out for danger. The Trance trait is, ultimately, meant to highlight the otherworldly character of elves, not to give them an edge in the game.

That all said, if you’re the DM and you decide to let Trance shorten an elf’s long rest, you’re not going to break the game. You are making a world-building choice if you do so. You’re deciding that elves, on a global scale, are ready to reenter a fight before anyone else, that they heal faster than most humanoids, and that they regain their magical energy faster. Such a choice would make sense in a world where elves are the dominant race, where they not only live longer than others, but also recover faster.

Can a thief use the Fast Hands feature to activate a magic item? No. One of the benefits of Fast Hands is being able to take the Use an Object action as a bonus action, but using a magic item doesn’t fall under Use an Object, as explained in the Dungeon Master’s Guide (p. 141). In contrast, using a nonmagical item, such as a healer’s kit, is in the domain of Use an Object.

Here’s a bit of wording minutia: we would write “melee-weapon attack” if we meant an attack with a melee weapon.

On your turn, you can interact with one object for free, either during your move or during an action (PH, 190). One of the most common object interactions is drawing or stowing a weapon. Interacting with a second object on the same turn requires an action. You need a feature like the Dual Wielder feat to draw or stow a second weapon for free.

Is the grappling rule in the Player’s Handbook usable by a handless creature? The grappling rule (PH, 195) was written for a grappler with at least one hand, but a DM can easily adapt the rule for a handless creature that has a bite or an appendage, such as a tentacle, that could reasonably seize someone. A wolf, for example, could plausibly try to seize a person with its bite, and the animal wouldn’t be able to use its bite attack as long as it held onto the person.

Keep in mind that the grappling rule in the Player’s Handbook requires the Attack action, so a creature must take that action—rather than Multiattack or another action in the creature’s stat block—when it uses that rule. A monster, such as a roper, that has a special grappling attack doesn’t follow that rule when using its special attack.

Do the AC bonuses from a ring of protection and bracers of defense stack? Yes. In general, bonuses stack, unless they’re from the same spell (see “Combining Magical Effects” in the Player’s Handbook, p. 205). You also can’t benefit from more than one ring of protection, for instance, since you can’t attune to more than one copy of an item at a time.

This month’s questions and answers are now part of the Sage Advice Compendium (version 1.03).

Jeremy Crawford is the co-lead designer of fifth edition Dungeons & Dragons. He was the lead designer of the fifth edition Player’s Handbook and one of the leads on the Dungeon Master’s Guide. He has worked on many other D&D books since coming to Wizards of the Coast in 2007. You can reach him on Twitter (@JeremyECrawford).