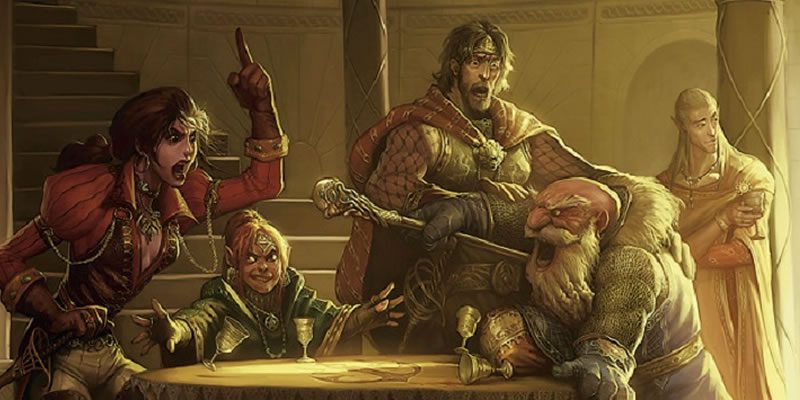 This is the second article I have written about house rules for initiative. I haven’t thrown the initiative rolls out the window, yet. After play testing Robert Schwalb’s Shadow of the Demon Lord action economy system, I have found that it works, but I want to try out some other methods of determining play order.

So the image below is a typical table top game seating arrangement (excuse my poor MS Painting skills).  So in this example there are 5 players and a DM.  At the start of combat, everyone rolls for initiative with a Dexterity check. 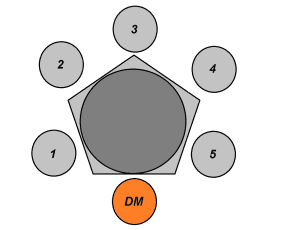 from the results we have a tie, and players could choose who will go first, so what does the turn order look like? It could be either one of these arrangements for turn order: 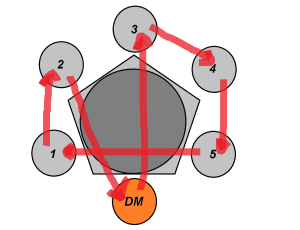 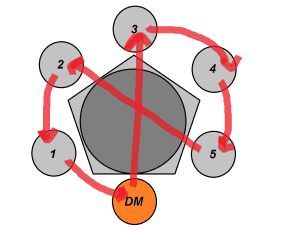 After this Initiative order is determined, then it is set and doesn’t change.  A player can take a Delay Action, but that just turns their action into a Reaction.  Which they can only have one of those, and would potentially lose any other reactions that may happen like Attacks of Opportunity.

I suppose everyone could get out of there seats and move around to make it easier, but you would need to do that each time there is combat. meh.

So here goes:  The problem is, that I still want to have all the players roll a d20, and perform a Dexterity Check to help determine initiative order. I just don’t want to write it all down and keep track of it.

I have a spreadsheet I use to track initiative and sort it by results when I play in Adventurers League games. I look at the list, and call out the name, but I don’t like doing it because, it’s not fun. It’s a pain in the neck, and I am constantly having to remind players about their turns can be frustrating as they are usually not ready to make an action.

So in board and card games, Play passes to the left. And most people understand that. Soooooo… why not use that mechanic except make a little change in the way player order is determined.

That direction could be player’s choice in the direction, either to the left or to the right, when there are the same amount of players between the 1st and 2nd highest initiative rolls.

How does this work?

Players 1 & 2 tied.  They decide that player 1 will take the honors of having the highest initiative. So play will go to the left because player #2 had the second highest initiative. Turn order, Player 1, Player 2, Player 3, Player 4, Player 5, and the monsters would have to go last in initiative order. Tricky players. 😉 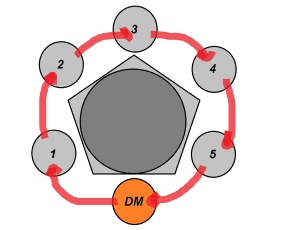 Here is another example of how it could work

So Player 4 rolled highest, and the fast monsters controlled by the DM rolled second highest.  Play would then go to the left, from Player 4 and the shortest route to the Monsters.

So Player 1 rolled highest, and Player 4 rolled second highest.  Play could go to the left or to the right, because there are two routes that are the same distance. But Player 1 chooses to the left, because it would allow all the players to take an action before the monsters.

I have play tested this, and it makes a Dungeon Master’s life so much easier. Seriously. Give it a try, and let me know what you think.

“When you roll for initiative and keep that order, the GM will go in any particular slot an equal percentage of the time. Any player or the GM will average taking an action in “3.5th place”. ((1+2+3+4+5+6)/6)

The following table shows the data for a scenario with 5 players around a table with a GM using the suggested system. It assumes that the players maximize the number of player turns before the GM goes.

Players get .2 of an action more per turn, or one extra action every 5 turns.”

Salt in the Blood: Oceanic Bloodline for ...