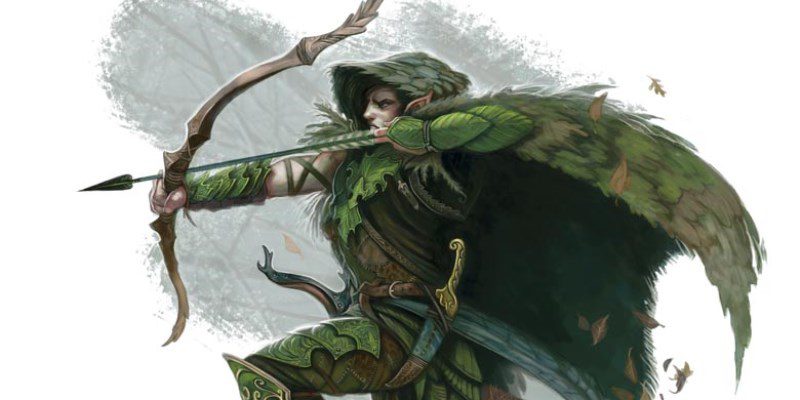 Thus far in this series we’ve occasionally seen big shifts in the ranger, as in 2e to 3.0 and 3.0 to 3.5. Those are peanuts compared to the shift to 4e. Every class underwent radical change. Having to strip the ranger down to either Martial or Primal powers forces this kind of change – while there were variant 3.x rangers that dropped spellcasting for other features (the scout, and a lot of third-party publishers), 4e is the only edition in which the core ranger does not cast spells of any kind. As a result, the ranger is a midpoint between the fighter and the rogue, without much focus on nature. WotC later introduced a Primal spellcasting archer (also with a thrown weapon option), the Seeker, in the Player’s Handbook 3 – they always interested me, but I won’t be covering them in this article. The short version is: archery-based Primal controller, and the Primal source does a lot of heavy lifting for rationales.

As with other 4e classes, I can’t talk about class abilities in a bullet-point way without tackling every single power. The core of each 4e class is its passive abilities at first level, though; for rangers, that’s Fighting Style, Hunter’s Quarry, and Prime Shot. Also, they have solid skill selections (a total of five trained skills), fair-to-middlin’ armor, and a lot less resilience (compared to fighters) than they have had in earlier editions – here they are on par with rogues, instead.

Fighting Style is the decision point between a Strength ranger and a Dex ranger, two-weapon fighting or archery. Melee rangers get a superior two-weapon fighting option that amounts to an average of +1 damage in the off-hand, and Toughness to cover the fact that they’ll be sucking up more damage in melee than an archer build would. Archers get Defensive Mobility, which provides an AC boost in a situation that is their primary weakness.

This is an element of 4e doing its thing and constraining options to the styles the designers favored: there’s absolutely no support for a great-weapon ranger or a weapon-and-shield ranger here. In 2e and 3.x, you’re swimming upstream to play a ranger that way; in 4e you’re standing in the surf next to King Canute. (Canute. He was a Danish king over Saxon England, famed for trying to command the tides. Read a book!)

It’s a logical outgrowth of defining the fighter as a defender and the ranger as a striker, but this got a lot of people twisted around on 4e early on. They saw the class’s name as the most important thing, rather than the source/role combination. If you want to play a warrior with a bow, ranger (or maybe rogue) is your class, end of story. Don’t nock it ‘til you’ve tried it.

It’s disappointing that a ranger can only be melee OR ranged in their attack power selection, since they’ll really only have good Strength OR good Dexterity. That’s the curse of the split-stat class in 4e – paladins, clerics, and warlocks know this pain well, as fully half of their powers use an ability score to calculate attack and damage bonuses that the player had to de-prioritize. Supporting more than one type of each class is good, but in 4e, that needs to happen within a single primary ability score.

Hunter’s Quarry is a reminder that rangers are a striker class, and a one-and-done replacement for Favored Enemy. In essence, your Favored Enemy is whatever you’re fighting right now – useful for making sure you don’t have trouble taking advantage of it.

There are scads of feats granting a slight uptick in Hunter’s Quarry’s effectiveness. Scads. It just reminds me how little any of those feats mattered to the story, the mechanics, or the tactics. Even taken together, they’re more like an oddly-distributed talent tree than refinement or focusing of a character concept. I’d say it’s just stringing you along with micro-choices.

Prime Shot is a carrot to get archer builds to play the positioning game. Accuracy is a big deal in 4e, but +1 isn’t much of a carrot. The basic concept is good – the puzzle of 4e combat is undermined when characters don’t really ever need to move – but a lot of tiny bonuses is the essential problem of 4e in the first place. (Like many design criticisms, this is obvious only with the benefit of considerable hindsight.) Of the two archer rangers that played in campaigns I ran, I seriously doubt either of them remembered they had this ability, much less went to the effort of figuring out positioning to make it work. Prime Shot… misses the mark.

The ranger’s utility powers could have distinguished it from the fighter, warlord, and rogue a lot more, but the Player’s Handbook options remain laser-focused on combat until 22nd level. Martial Power offers more distinctive and nature-related powers, even as its offerings for attack powers seem more repetitive. Honestly, there are only so many conditions one can justify imposing with two weapons or a bow, and they’re scraping the bottom of that barrel before they’re done with the Player’s Handbook.

A later book, Martial Power, added a build that made the ranger a pet class, primarily by requiring the ranger to share her action with her pet. This build is substantially more nature-directed than the core melee or archer options. Overall, though, it’s almost as hard to find a nature theme in 4e’s ranger as it is in OD&D, aside from a substantial number of the powers having an animal in the name. It fits into the overall style of 4e just fine – if 4e is for you, the ranger is great, and if 4e isn’t for you, neither is its ranger. The pet-class build is notable as the clear jumping-off point of the 5e ranger’s beast master path, including the constrained action economy that has so many players all a-quiver with rage.

For the 4e ranger, the Guardian theme gets the shaft, except insofar as a striker can soak up a little damage for the rest of the team. The Wanderer theme is also curtailed somewhat, though they have good skills for exploration skill challenges, and skill-based powers from later books support this a bit further. Skirmisher, on the other hand, is cranked up to 11 in an edition that is all about positioning and movement.

In Heroes of the Forgotten Kingdoms, we see two new builds for the Ranger in the 4e Essentials line: the Scout and the Hunter. Essentials builds don’t necessarily have anything in common, since even their combat role can be different, as it is here; the Hunter is a Controller by means of archery, while the Scout is a melee Striker. Essentials also breaks down the iron law of Only One Source Per Class that previously ruled 4e – naturally, this means that the ranger splashes the Primal source. (If you don’t speak 4e, this means they pick up pseudo-druid powers again.)

Now, bracer self for some disappointment: I can’t go into as much detail on the Scout and Hunter as I would with other classes, as I don’t own the book and the wiki articles on them are quite scanty. As with other Essentials weapon-using classes, the core of their functionality involves making a basic attack, and tacking something particular onto that. If Essentials had been in print when I was first running 4e, I’m sure that the first of the two archers who played in my game would have gone for Hunter, as she pushed back against some of the default assumptions of the Player’s Handbook ranger (leather rather than hide). The other would have had a harder time getting what I think he wanted from the Essentials classes, as he was all about being an archer Striker. The amount of damage he kicked out with the Battlefield Archer paragon path was Not Okay, and I’ve always wondered if there were rules there that we parsed wrong.

The needle moves somewhat on the Skirmisher/Wanderer/Guardian thematic balance. Many of the paragon paths targeting the ranger refer to guarding a place, or nature, or civilization, but that only makes them guardians in the sense that all PCs might be guardians – there’s no mechanical throughput on that note. Wilderness Knacks (identical options for Scout and Hunter) definitely push the Wanderer theme in good way, and if you’re going to be exploring the wilds, a ranger can save you a lot of trouble. It is really cool that the ranger shifts into a Leader-like role in noncombat wilderness challenges, and that’s one thing that 5e learns from 4e Essentials and embraces.

I hope this hasn’t been too arrowing of an experience for you, but if archery puns are your bane, this has probably been really aragornizing. There’s good drizzt for the mill to be found here; the Hunter and Scout point the way toward 5e, though 5e is much less explicit in distinguishing the controller and striker roles, and restores marginal support for other fighting styles. To my mind, it’s more obvious that WotC is searching for the Ranger’s identity in 4e, because the attack powers have so little character even compared to other Martial-sourced classes – including an animal or monster in the power’s name does not carry the water of establishing theme.

Next time around, I’ll walk through 13th Age’s and Dungeon World’s respective rangers, because for all that the games make exactly opposite decisions about a lot of things (numerical scaling, for starters), their Ranger classes are surprisingly close parallels.