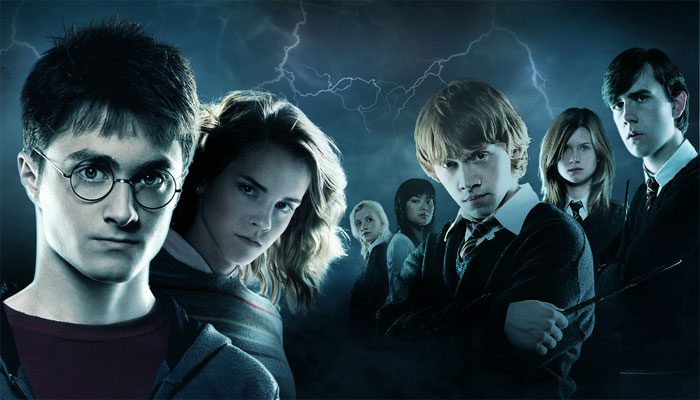 I’ve been thinking about Harry Potter since the word came out that there is going to be another story in the series added. It’s a play but still sounds interesting none the less.

And with that thought, it was followed up by another thought about Harry Potter Wizards compared to the Wizards in D&D. The “wizhards” in Harry Potter are sort of a Sorcerer/Wizard hybrid. They have to be born with magic but then they have to go to school to learn spells and such. And there are a lot of spells in the world of Harry Potter. The infographic of Harry Potter and the Spells you ought to know may be difficult to read, but gives me a list of spells to use in a D&D game. The spells in the infographic are put into three categories: Defensive charms & curses, Charms, and Unforgiveable Curses. So taking those spells, I looked for corresponding D&D 5th edition spells that could be used and tweaked a bit. 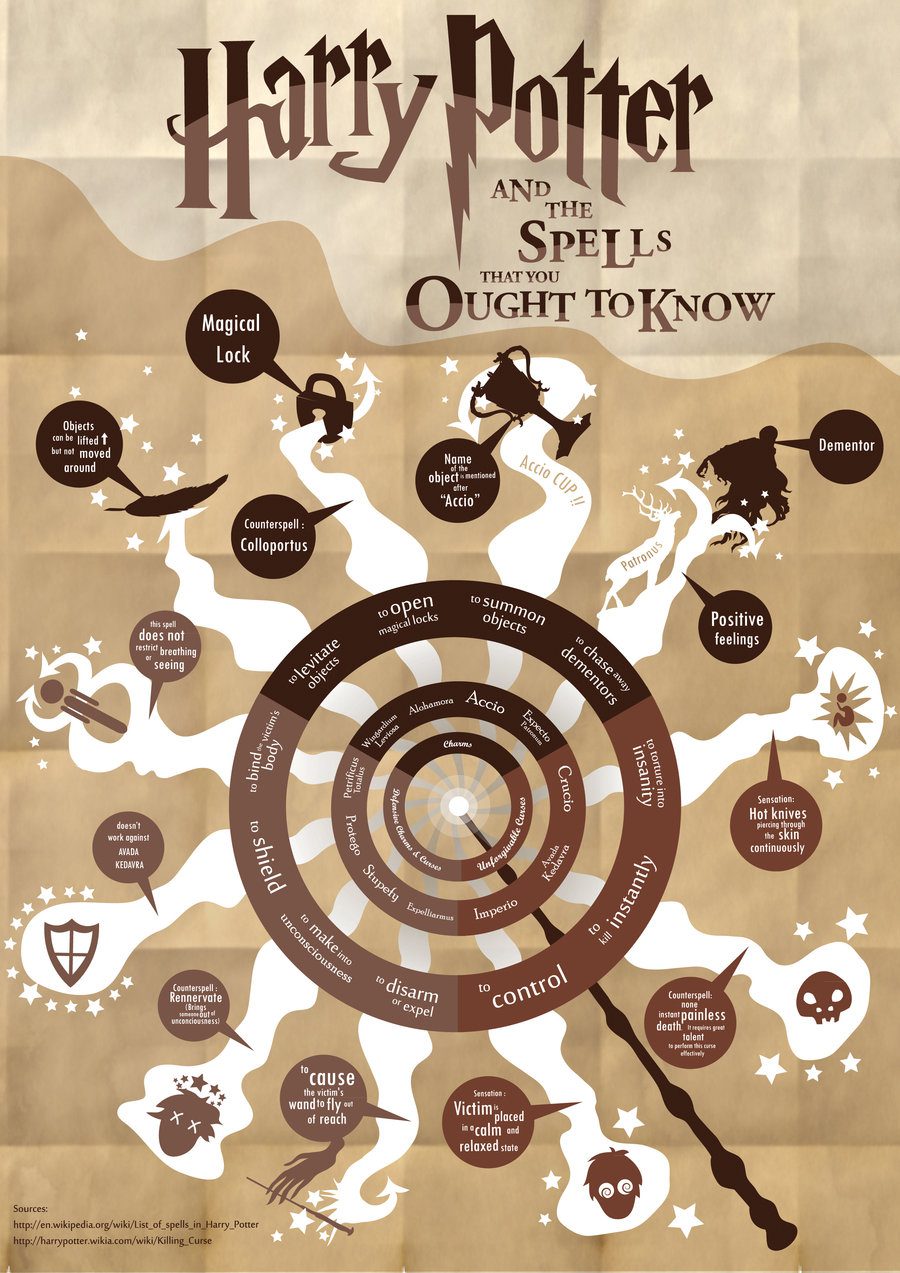 Here’s the list of spells that I think would be a good fit:

Harry Potter Spell Description: Protego allows minor to moderate curses and hexes to go back onto the attacker.
Etymology: Latin protego, “I cover” or “I protect”.

This spell is an attempt to counter a creature starting to cast a spell. If a creature is casting a spell that is 3rd level or lower, its spell fails. A spell of 4th level or higher is harder to counter, and an ability check using your spellcasting ability is needed. The DC is 10 plus the spell level.
At higher levels. A higher level spell slot can be used instead and when using a 4th level or higher, the interrupted spell has no effect if its level is less than or equal to the level of the spell slot used.

Harry Potter Spell Description: This charm will cause an item that a victim is holding to fly away. If used with more force it can knock out the victim.
Etymology: Probably a combination of Latin expello, meaning “expel”, and arma, meaning “weapon”.

This spell is an attempt to knock something out of someone’s grasp. When cast, the target makes a Strength(Athletics) check or Dexterity( Acrobatics) Check against your spell DC . On a failure, the object will fly from the target’s grasp up to 10 feet in a random direction determined by the Dungeon Master.
At higher levels. For every level higher than 2nd, the spell causes 1d4 of force damage.

Harry Potter Spell Description: Used to temporarily bind the victim’s body in a position much like that of a soldier at attention; the victim will usually fall to the ground.Etymology: Latin petra, meaning “stone”, and fieri (past participle factus), meaning “to become”; totaluscomes from Latin “totus”, meaning “complete

This spell attempts to bind the creature in place with magical force. The creature makes a Strength saving throw. On a failed saving throw, the target creature is restrained by an invisible force. The restrained creature can use its action to make a Strength (Athletics) Check against your spell DC at disadvantage . On a success it frees itself. If the creature is proficient in Arcana, it can instead make a Intelligence (Arcana) check against your spell DC to free itself.

One creature or object of your choice that you can see within range rises vertically 20 feet, and is then moved 10 feet in any direction each turn. The spell can lift a target that weighs up to 50 pounds. An unwilling creature can make a Constitution saving throw against the spell. On a success the creature is unaffected by the spell
At higher levels. For every level higher than 1st, the weight increases by 50 pounds and the movement increases by 5 feet.

Harry Potter Spell Description: Used to open and unlock doors; it can unseal doors upon which the Locking Spell has been cast, although it is possible to bewitch doors to resist the spell.
Etymology: The incantation is derived from the West African Sidiki dialect used in geomancy; it means “friendly to thieves”, as stated by the author in testimony during a court case.

Choose an object that you can see within range. The object can be a door, a box, a chest, a set of manacles, a padlock, or another object that contains a mundane or magical means that prevents access.
A target that is held shut by a mundane lock or that is stuck or barred becomes unlocked, unstuck or unbarred. If the object has multiple locks, only one of them is unlocked. If a target is chosen that has arcane lock cast on it, then the spell is suppressed for 10 minutes.

Harry Potter Spell Description: This charm summons an object to the caster, potentially over a significant distance. It can be used in two ways; either by casting the charm and then naming the object desired, or by pointing your wand at the desired object during or immediately following the incantation to “pull” the target toward the caster; in either case, the caster must concentrate on the object they wish to summon in order for the charm to succeed. The caster doesn’t necessarily need to know the location of the target if they say the name of the object to be summoned, such as when Hermione Granger summoned some books from Dumbledore’s office simply by saying “Accio Horcrux books!” while in Gryffindor Tower.
Etymology: The Latin word accio means “I call” or “I summon”.

Describe or name an object that is familiar to you. You sense the direction to the object’s location, as long as that object is within 1,000 feet of you. If the object is in motion, you know the direction of motion.
This spell can’t find the object if any thickness of lead blocks a direct path between you and the object.
At higher levels. A higher level spell slot can be used to bring the object through the air to you, when using a 3rd level spell slot or higher. The object will find a path and a speed determined by the Dungeon Master to travel. You will sense the location of the object for the duration of it’s movement. If the path traveled is obstructed the object will move around the obstruction. If an object cannot find an egress point from it’s current location then after 1 turn, it will stop moving and return to it’s original location if possible.

Harry Potter Spell Description: This charm is a defensive spell which will conjure a spirit-like incarnation of their positive emotions to defend against dark creatures; it can also send messages to other witches or wizards. It seems one’s Patronus will take the form of something important to the caster, and can change when one has undergone a period of heightened emotion.
Etymology: Patronus means “protector” in Latin; in archaic Latin, it means “father”; considering the form Harry’s takes, this is interesting. The Latin word expecto means “I await”

You summon a spirit protector which appears in an unoccupied space next to you. The spirit appears to be angelic, fey or natural (your choice), but appears incorporeal none the less. The spirit disappears when the spell ends. If a enemy comes within 15 feet of you, the spirit will cause them harm for every turn they are in range. The enemy will suffer 3d8 radiant damage upon a failed Wisdom saving throw, or half upon a success.
At Higher Levels. The damage increases by 1d8 for each spell slot level used above 3rd.

Harry Potter Spell Description: Inflicts intense pain on the recipient of the curse; the pain is described as having hot knives being driven into the victim. It cannot be cast successfully by a person who is doing so out of pure spite or anger; one must feel a true desire to cause the victim pain. If one casts this spell, he or she will receive a life sentence in Azkaban prison for it, as with the other two Unforgivable Curses.
Etymology: Latin crucio means “I torture”.

The spell inflicts pain upon the target creature. The creature takes 1d8 + spell modifier points of psychic damage for 4 turns, the target creature makes a Wisdom saving throw each turn to reduce the damage in half. If reduced to 0 hit points, the creature is unconscious but stable. The target can be awoken the next turn
At higher levels. A higher level spell slot can be used instead and when using a 5th level or higher, the damage occurs additional turns for each spell slot level above 4th.

Harry Potter Spell Description: Causes instant death to the victim wherever it hits on the body, is accompanied by a flash of green light and a rushing noise; there is no known counter-curse, although there are a number of ways to prevent death by it, such as hitting it with another spell in mid-flight, dodging it, or interrupting the caster. It is one of the three Unforgivable Curses.

Harry Potter was saved from this spell a number of times, both by his mother’s sacrifice, because he was an accidental horcrux, and because his wand and his enemy’s were made of the same core.
Etymology: During an audience interview at the Edinburgh Book Festival on 15 April, 2004 J. K. Rowlingsaid “Does anyone know where avada kedavra came from? It is an ancient spell in Aramaic, and it is the original of abracadabra, which means “let the thing be destroyed”. Originally, it was used to cure illness and the “thing” was the illness, but I decided to make the “thing” as in the person standing in front of me. I take a lot of liberties with things like that. I twist them round and make them mine.”

You causes one creature you can see within range to die instantly. If the creature you have chosen has fewer than 50 hit points, it dies. Otherwise the spell has no effect.
At higher levels. When you cast this spell using a spell slot of 8th level or higher, the hit point threshold increases by 25 hit points for each spell slot level above 7th.

Harry Potter Spell Description: One of the three “Unforgivable Curses”. Places the subject in a dream-like state, in which he or she is utterly subject to the will of the caster. However, those who are strong willed may learn to resist it. The use of this curse on another human results in capital punishment or life sentence in Azkaban

You placed a magical command on a creature that you can see within range, forcing it to carry out some service or refrain from some action or course of activity as you decide. If the creature can understand you. It must succeed a Wisdom throw or be charmed by you for the duration.

6 Real World Locations To Inspire Your ...

D&D 5e D&D rpg dm world-building dungeon-master homebrew character pathfinder unearthed-arcana dmg adventure-design D&D5E monsters D&D 4e combat
We use cookies to ensure that we give you the best experience on our website. If you continue to use this site we will assume that you are happy with it.Ok