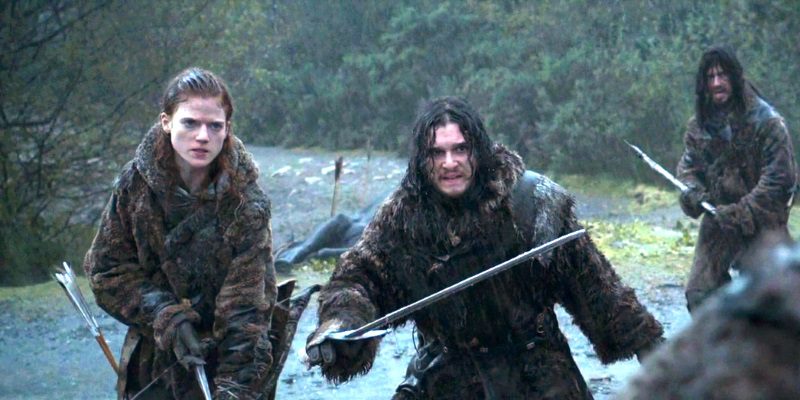 This time in History of the Classes, we’re wandering some distance afield of Dungeons & Dragons itself. Dungeon World and 13th Age both look to the dungeon-crawling action of D&D as their spiritual ancestor, though, and they both have a Ranger class. Since they both set out to re-envision D&D, I thought it might be interesting to see how they tackle a class that D&D has had a hard time pinning down.

This game develops its own language of pointing out what players “should” do with characters and their classes. For example, rangers can wear heavy armor and carry shields, but they take a -2 penalty to attack rolls for each of those, and each grants just one point of AC. It’s a terrible trade-off, and the game assumes you figure that out rather than getting misled by thinking you should wear the heaviest armor you the game allows you.

Rangers are also pretty tough (when it comes to hit points), edged out only by the fighter and the paladin.

One of the oddities of 13th Age – if you like it, certainly part of what makes it work – is that where 4e put every class on a comparable at-will/encounter/daily/utility scheme, classes in 13th Age may be radically dissimilar, even for classes that aren’t worlds apart thematically. For example, the Fighter is all about flashy, situational Maneuvers (communicating adaptability, tactics, training… all that good stuff), while the ranger just piles more and more Stuff onto melee or ranged basic attacks – sometimes making more basic attacks, often improving your crit range, and so on. This is good, because if you’ve taken an Animal Companion, you’re managing two relatively-straightforward characters instead of one more complex one.

Talking about class features is a little odd, too, because in 13th Age you don’t have a fixed progression. Instead, you choose three class talents at 1st level, and get one more at 5th and a final one at 8th level. The feat progression plugs directly into these class talents, though there’s also a short list of general feats. This means that every class is a mix-and-match of features, and a subset of those features get boosted modestly over the course of play, in a way that looks a lot like a three-step talent tree from a video game.

Thus the ranger can be a lot of different things.

I love the variety made possible in this approach. You could absolutely play a ranger who relied on spellcasting and a beast, or on perfect archery, or a “traditional” rather with tracking, a favored enemy, and one of the style-specific talents. There are more nature-focused rangers (a lot of which 13th Age covers with backgrounds rather than class abilities), and others that are less so – if you wanted to play an urban bounty hunter, you can do that, though it doesn’t quite come together until you hit 5th level.

This ranger reminds us that the class really is something different to everyone who approaches it, even more so than other classes. The only thing that jumps out at me as “missing” is something explicitly stealth-related. I can’t easily tell how, or if, 13th Age handles stealth, so maybe it’s just not a thing here. Since 13th Age has only ten-level classes, I definitely see this as a stripped-down ranger. Taken together, it presents a pet-oriented weapon-wielder that relies on devastating precision – but you could build a ranger for whom none of those things were true.

In so many ways, Dungeon World has nothing whatsoever in common with 13th Age. Scaling, resolution mechanics, the flow of combat… these could hardly be more dissimilar. When it comes to class features and development, though, they’re closer to one another than they are to most games.

In DW, characters start with a handful of class features at 1st level, and gain a new feature at every level thereafter – but they never gain all of the abilities available to their class. Compared to 13th Age, any two DW rangers share several features, but can still expand in quite different directions.

Once again, the ranger is a pretty tough hombre, and dishes out pretty solid damage. Elven rangers are incredibly good at living in the wilds, while human rangers are excellent scroungers. Rangers start with four core moves, or class features:

DW essentially says all rangers include these things. Therefore rangers are great at ambushes, finding people and things in the wilds, and all have a beast of some kind. Beyond this, they might:

At 6th level, you open up still more options, some of which just improve upon the earlier ones.

Once again we have a ranger with a ton of room for differentiation, choosing ten items out of a list of twenty-one. Because the core competencies of animals, tracking, and ambushes are obligatory, though, you can’t go too far afield. (Not all those who wander are lost.) This ranger doesn’t say anything specific about guarding the lands of humans or elves from the humanoids of the wilds, as there’s no Favored Enemy combat improvement at all. There’s stealth, sniping, combat archery, two-weapon fighting (but not so much two-weapon fighting support that you’re stuck taking it), and a ton of wilderness exploration boosts. DW probably has better and clearer exploration mechanics than 5e, though there are some general similarities – but the clarity of moves and their decision points is the essence of why Powered by the Apocalypse is the new hotness. (It’s deserved.)

13th Age and Dungeon World both show us a ranger that is a nature warrior, without necessarily being a fighter-druid the way a paladin is a fighter-cleric. It’s interesting that both of them go with opt-in spellcasting – there’s nothing inherently mystical about these ranger classes. Ironically, DW shows a little more respect for the action-economy issues of the animal companion than 13th Age does – ironic because DW doesn’t have an action economy in the traditional sense. They’ve just stripped out the concept of the beast as an independent actor to smooth the flow of gameplay.

They definitely draw from the lineage of D&D rangers, and support the Wanderer and Skirmisher themes generously. Guardian is a lot harder to spot. While neither game has codified combat roles for defender, striker, leader, and controller, these rangers are strikers with a touch of control, and no defender-like mechanics at all. 13th Age doesn’t have firm mechanics to make the ranger a wilderness guide, though Tracker and background expenditures can help there, but DW’s ranger dominates exploration play in a way that makes the game more fun for everyone in the group, rather than hogging the spotlight.

Next time in History of the Classes, we come at last to the ranger of D&D 5th edition. I would love to tell you that the crownless again shall be king, but… even Mike Mearls acknowledges that the class isn’t satisfying the majority of those who care about rangers.

In Defense of Skill Challenges