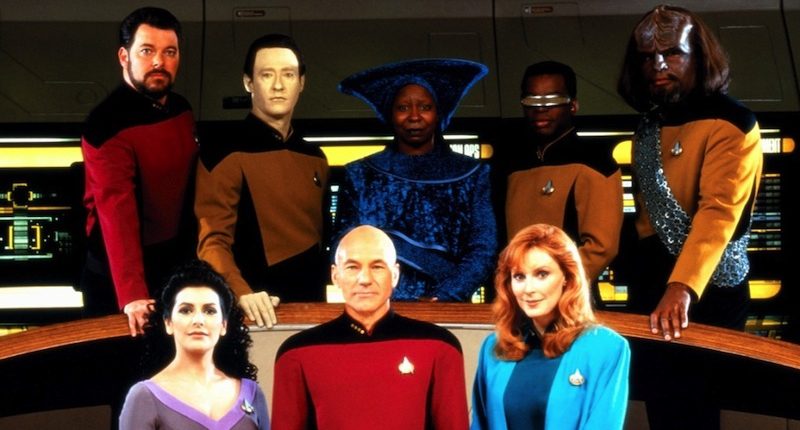 Fantasy and Science Fiction will always be different sides of the same coin. They are like twin siblings, different yet the same. They often share similar morals, heroic characters, exotic locations, non-human races, terrifying monsters, and indulge in activities that are unobtainable in our real world such as magic, mysticism, and future technology. And while there are a few people that do not stray from one genre to the next, the majority of people who enjoy one also enjoy the other.

Using myself as an example, I actually found my love for science fiction first. In the late 80’s and early 90’s, I was exposed to both the original Star Wars Trilogy and Star Trek: The Next Generation. In fact, I would submit that TNG was the very first “mature” television series I ever watched as I was only 7 to 13 years old while it was airing. I literally grew up with the series. I also find it interesting that TNG ended in 1994 and in the very next year, 1995, I had found and fell in love with D&D and fantasy. I would never lose my passion for science fiction but fantasy has dominated my time and my writing ever since.

And all of this brings me around to combining these two wonderful things together. TNG was more than just a re-boot of a franchise and more than your average space shoot em’ up; it had award winning writing, award winning acting, and a flow to its storyline which I have yet to see any science fiction show since surpass. For these reasons, it also makes an excellent resource for D&D adventure conversion. To illustrate what I mean, I’ve picked out five TNG episodes with storylines that, I think, would make for exciting and thought provoking D&D adventures. (Warning: there are Spoilers!) Here they are in order of their appearance:

Encounter At Farpoint I & II (Season 1)

This was the premiere episode written by Gene Roddenberry as well as long-time trek writer D.C. Fontana. It introduced the crew as well as the main antagonist of the series, “Q”. The story is centered on a fancy new space port that had mysteriously been designed and built by a race of people with no prior significant technological skills. Also, many people notice that strange things are happening like items suddenly appearing out of nowhere and people’s thoughts becoming reality. All is revealed near the end when it is discovered the space port is actually an elaborate tactile illusion created by an interstellar creature that the locals had found and exploited. The creature is set free and it rejoins another of its kind before leaving. In a D&D context, I can see the players entering a magical city filled with wonders, only to discover that the locals are really using some kind of primordial or extra-dimensional creature to power their needs. The players must then find a way to free the creature from its slavery and allow it to go free.

This episode has the Enterprise encounter a large space faring creature with incredible power nicknamed “Tin Man”. While the Romulans seem to be out to hurt the creature and perhaps to capture it, the Federation crew, with the help of the empath Tam Elbrun, are trying to learn more about it and warn it that a nearby star will soon go nova. In the end, Elbrun manages to bond telepathically with the creature and the two of them go off together leaving their past lives behind. For the purposes of D&D, I think it would be interesting for the players to happen across a powerful entity like a titan or a dragon that has somehow lost its memory or has no concept of how it got there. This could lead to others trying to take advantage of the creature or lure it away from the PCs. Ultimately, I think the goal would be for the players to help the creature remember its past and help it get back home.

This two part episode was an instant classic and it helped to cement TNG as one of the great science fiction series of all time. It has also been voted, by the fans, as the greatest episode of the franchise and it lead to several spin-off episodes as well as the movie Star Trek: First Contact. The crew do battle with the Borg and are, at first, seemingly helpless against them. Then, in a stunning move, the Borg manage to board the Enterprise and abduct Captain Picard which later leads to his assimilation as Locutus. Locutus leads an all out attack on the Federation which destroys dozens of ships and is only stopped by the Enterprise crew when they manage to abduct Locutus and nurse him back into Captain Picard. I think it would be a great D&D plotline for the players to have a leader, or a mentor, that eventually becomes corrupted by a powerful spell or curse. The players then need to tread the fine line between stopping their former ally from hurting others but also trying to get them back in one piece.

This episode has quite a similar plotline to a famous science fiction movie called Enemy Mine. In the episode, Captain Picard and the captain of a hostile alien ship are both beamed down to a planet where they are forced to work together to kill a deadly creature. The kicker being that both captains have no idea how to speak the language of the other and trust issues abound. Eventually, they manage to work out a basic system to understand one another and fight the beast that is stalking them. After the beast is killed, the alien captain succumbs to his wounds leaving Picard to return to his ship and make peace with the other alien ship. For some reason, when I think about this plotline being converted to D&D I think about Dwarves and Elves. Just imagine trying to roleplay a party where a few members are Dwarves and a few members are Elves and neither group knows how to speak to the other! Not to mention they have to work together to stop a powerful evil! That sounds like a lot of fun to me.

In Masks, the Enterprise computers as well as Lt. Commander Data are infected with a sort of virus that begins to change the entire ship into an alien playground. Data himself is imbued with the personalities of several alien gods and is continually changing from one to the next. In order to gain control of his ship back, Captain Picard is forced to learn enough about this strange alien culture to impersonate a god himself and shut the virus down. Despite being one of the weirdest episodes of the series, Masks is filled with wonderful metaphor and interesting theatrical devices. From a D&D standpoint, I think it would be interesting to have a creature or maybe a psionic take over the minds of the PCs but for a noble cause. Later on, after the control wears off and the players confront their puppet master, they might negotiate a pact to help one another.