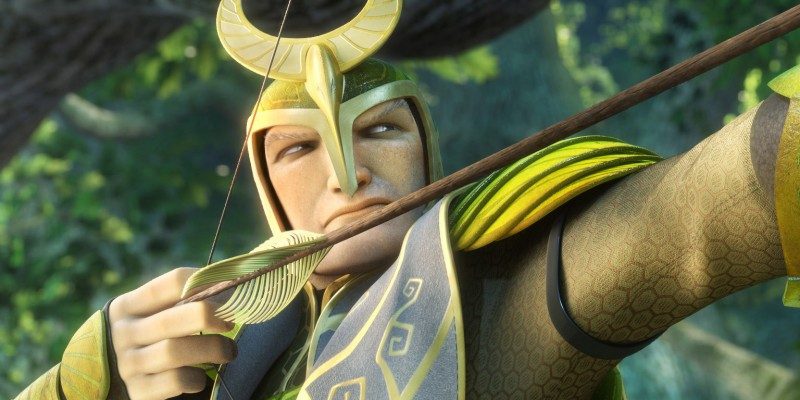 A dear friend of mine asked me to run a 5e adventure for his kids over the holiday. It will be their first official D&D game, though since their dad is a video game designer they are more than familiar with the concept. His son wants to play a Merlin-like half-demon magician with a pet wolf. Tiefling wizard it is; with a wolf familiar because fun trumps rules. His daughter’s requests were a little more challenging: a faerie or a unicorn. I countered with a centaur-like unicorn race with plans to “borrow” Dan Dillon’s centaur rules from the brilliant Midgard Heroes, but her counter-proposal was a faerie with a pet unicorn. We landed on a pixie with a unicorn NPC friend.

Their dad decided that a PC with a leadership role would be ideal, so he could reasonably step in if they needed guidance. As a fan of the oft-overlooked Epic film and Christina Stiles’ (et al) Faery’s Tale, I suggested a sprite fighter (battlemaster) to counterpoint his daughter’s pixie sorcerer. It was an excellent excuse to expand a faerie racial build into sub-races and because I am who I am, naiads (aka nixies) made it into the mix.

The most obvious hurdle to design is that sprites and pixies in the MM are Tiny. Though Small races don’t have the same intricate definitions as they do in PF/3.5, I clearly need to provide some game mechanics to represent the advantages and disadvantages of being only a foot tall. I also wanted to leave it fairly simple. Tweaking the maximum and minimum ability scores seemed the best start. Carrying capacity for creature sizes is already dealt with in the PHB, so that was easy, and limiting weapon-size usage parallels the only significant Small-size rule in the PHB.

Weapons and armor were the second challenge. A sprite’s longsword and bow deal only 1 point of damage, which is fine for an adversary but not much fun for a PC. I also didn’t want to recreate every weapon with a Tiny variant so I decided to borrow a note from games like Numenera and differentiate Simple and Martial weapons with flat damage rates. Making tiny weapons finesse also makes sense, allowing the smaller races to take advantage of their Dexterity scores, while still limiting their overall damage due to their minuscule weapons.

To make things simple, I left the AC of tiny armor the same.

Though designed specifically for smaller bodies, armor with the tiny quality provides the same Armor Class as armor designed for small or medium creatures. The weight of tiny armor is one-quarter that of their larger counterparts.

Ability Score Increase. Your Dexterity score increases by 2.
Age. Faeries are immortal, though they may die due to injury, disease, or other means. You are immune to any affects that manipulate your age.
Alignment. Faeries vary slightly in alignment preferences depending on their subrace (see entries below). Naiads, pixies, and sprites all tend toward the neutral good alignment, with the average members balancing their free-spirited nature with a sense of honor and loyalty.
Speed. 10 ft.
Size. All subraces of faerie’s range from 8-16” in height. Your size is Tiny.
Languages. You speak, read and write Sylvan, and either Aquan (naiads) or Elvish (sprites and pixies), as well as one other language (typically Marine Trade or Common).

Protectors of lakes and oceans, naiads are as linked to bodies of water as their cousins are to forests and glades. Naiads are often considered the most elusive and rare of fae by surface races, even compared to the shy and reserved nature of their cousins. Naiads are rarely found in groups larger than a dozen and form stronger bonds to the animals of their territories than to other humanoids.

Naiads are drawn to primal classes and those that rely on natural beauty. Bards, druids, rangers, sorcerers, and even barbarians can be found among them. Sea singers, Circle of Land and Moon druids, Beastmasters, and both Stormborn and Oceanic bloodline sorcerers are common. Totemic barbarians are found among naiads that reside in deeper waters and those that befriend sharks and pods of transient orcas.

Ability Score Increase. Your Wisdom score increases by 1.
Alignment. Capricious and reserved, naiads are the fae race most likely to take chaotic alignments.
Speed. You gain a swim speed of 30 ft.
Amphibious. You can breath both air and water.
Darkvision. You have darkvision to a range of 60 ft.
Voice of Nature. You gain proficiency with Wisdom (Animal Handling), Charisma (Perform), and Charisma (Persuasion) checks.
Water Child. You gain the shape water and waterwhip cantrips. You may also cast beast bond once per day.

Pixies are the smallest and shiest of the fairy races. Ironically, they are also the most curious about other cultures and most welcoming when set to ease. They also have the strongest connection to their race’s magical ancestry.

Pixies are manifestations of natural magic and rarely follow combat-focused classes or careers that require intensive study. Bards, druids, rogues, and sorcerers are common among pixie-folk, especially Circle of the Land druids, Arcane Tricksters, and both Wild Magic and Stormborn sorcerers. Wizards are uncommon, but those that follow magical study often become leaders of their communities or respected advisors on mortal culture. Though rare, some pixies turn to darker powers, making pacts with Archfey to become Chain warlocks.

Ability Score Increase. Your Charisma score increases by 1.
Speed. Pixies have wings that resemble those of butterflies. You gain a fly speed of 30 ft. You must land at the end of any round in which you fly while wearing medium or heavy armor.
Invisibility. As an action, you may turn invisible until the beginning of your next round.
Spirit of Nature. You gain the druidcraft and dancing lights cantrips. Choose one of the following spells: detect good and evil, entangle, sleep. You may cast your chosen spell at its lowest level once per day. Charisma is your spellcasting ability for these spells. If you are a spell caster, you may add your chosen spell to your list of spells known, to your spell book, or to your formula book (if an alchemist), in place of being able to cast it once per day. In addition, you may use pixie dust as an arcane focus.

Sprites are the staunch warriors of the faerie world. Intelligent and inventive, sprites use their nimbleness of mind and body to fiercely defend their groves and glens. Sprites are skilled herbalists that explore the physical world through alchemy as often as the arcane. Sprite warriors will sometimes opt to wear medium or heavy armor despite its limitation on their ability to fly. Instead, they turn to mounts such as eagles, hawks, dogs, and wolves to increase their mobility on the field.

Sprites are drawn to classes that focus on tactics, arcane power, or alchemical knowledge. Alchemists, fighters, rangers, rogues, and wizards are common among sprites, especially Arcane Tricksters, Battle Masters, Beastmasters, Eldritch Knights, and Poisoners. Though rare, some sprites turn to the divine for answers and become Circle of the Land druids.

Ability Score Increase. Your Intelligence score increases by 1.
Alignment. The sprites’ dedication to tactics and education give them a reputation for being overly serious compared to their cousins and are the fae race most likely to take lawful alignments.
Speed. Sprites have wings that resemble that of dragonflies. You gain a fly speed of 40 ft. You must land at the end of any round in which you fly while wearing medium or heavy armor.
Heartsight. You gain proficiency with Wisdom (Animal Handling) and Wisdom (Insight) checks.
Naturalist. You gain proficiency with either the herbalist’s kit or poisoner’s kit (your choice).
Sprite Weapon Training. You have proficiency with all weapons with the tiny quality.
Unseen. As an action, you may turn invisible until the beginning of your next round.

You have tapped into the deep magical connection inherent in all pixies. Choose two of the following spells: confusion, detect thoughts, dispel magic, fly, phantasmal force. You may cast your chosen spells at their lowest level once per day. Charisma is your spellcasting ability for these spells. If you are a spell caster, you may add your chosen spells to your list of spells known, to your spell book, or to your formula book (if an alchemist), in place of being able to cast them once per day. You may take this feat more than once. If you do, you may choose two additional spells from the list.