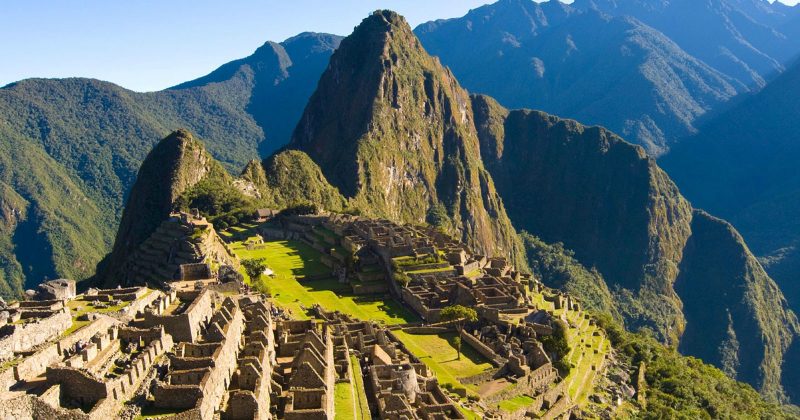 Every so often I get captivated by a beautiful piece of fantasy art work and some of my favorites are the ones that just show a massive landscape of epic proportions with usually a few characters or creatures in the foreground. There have also been dozens of movies in recent years that have provided inspiring backdrops and breathtaking locations including The Lord of The Rings Trilogy, Avatar, and The Harry Potter Series to name three. And every time I see something on this level I think to myself, “How do I make my campaigns look like that without ripping them off?”

With time and experience I think I have found the answer and it’s really not as far-fetched as you might think. In fact, it really has everything to do with the old saying “the truth can be stranger than fiction”. So, with that in mind, a lot of my fantasy backgrounds and locations have been inspired by some amazing real world locations. Unfortunately, these are the kind of locations that you often only get to gaze upon in pictures or through the wonder of the internet; however, they do span the globe and include five out of the seven continents. Thus, the odds are you live relatively close to at least one of these incredible places and you owe it to yourself get out and go see as many as you can.

I hope that some of these places can inspire you just as much as they have me. Here they are in alphabetical order: 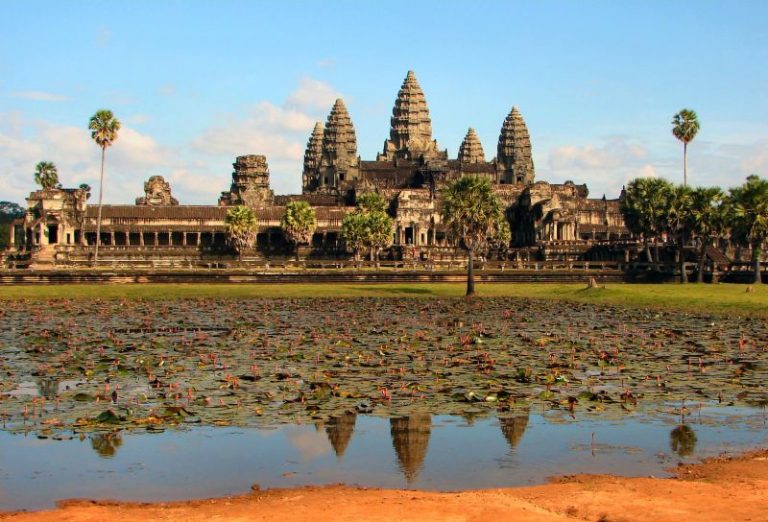 Angkor Wat was built near the end of the 1100’s to be the capital and grand temple for the Khmer Empire. Originally a Hindu temple with Hindu architecture, it was later converted into a Buddhist temple roughly 100 years after its construction. When the first Europeans laid eyes on it in the late 1500’s, they were flabbergasted by its beauty and detailed construction. And one of the most amazing aspects and testaments to the original builders is how well this UNESCO Heritage Site has held up over the years. Despite being over 900 years old and surviving countless wars, the Cambodian people still take pride in the temple and have gone to great lengths towards its upkeep and restoration. And, just to give you some scale and some reference points, here are some important numbers: the outer wall is over 15 feet tall and more than 6000 feet long made from sandstone, limestone, and laterite; the total area enclosed by the main wall is 203 acres; the main tower is 203 feet tall; and it is estimated that the total construction took more than 30 years. Putting a structure similar to Angkor Wat into any D&D campaign is a natural fit and it can be easily adapted to dozens of purposes. 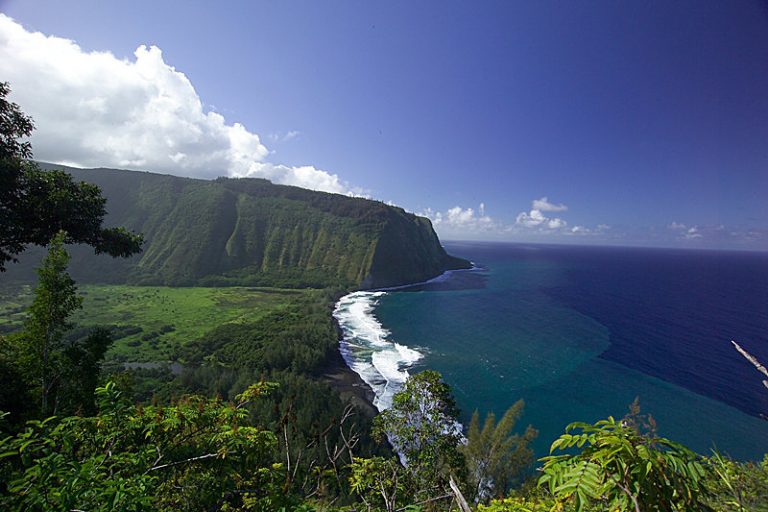 I’ve known many people to talk about Hawaii and paradise in the same context. And while I’m not saying they are wrong, there is much more to Big Island than just its beauty. Did you know that Big Island is home to five volcanoes, three of which are still active? Did you also know that it is the largest island in all of the United States? Did you know that it is home to one of the USA’s largest cattle ranch, Parker Ranch? And did you know that even though the island is just over 4000 square miles, it boasts seven National Parks? Maybe it is paradise after all. However, from a roleplaying point of view, Big Island has an enormous amount of potential for adventure. Tropical forests, volcanoes, sandy beaches, crystal blue waters, craters, crevasses, caves, waterfalls, it is really all here. This place is perfect inspiration for any kind of seafaring or pirate campaign and it also has that whole Robinson Crusoe feel to it. 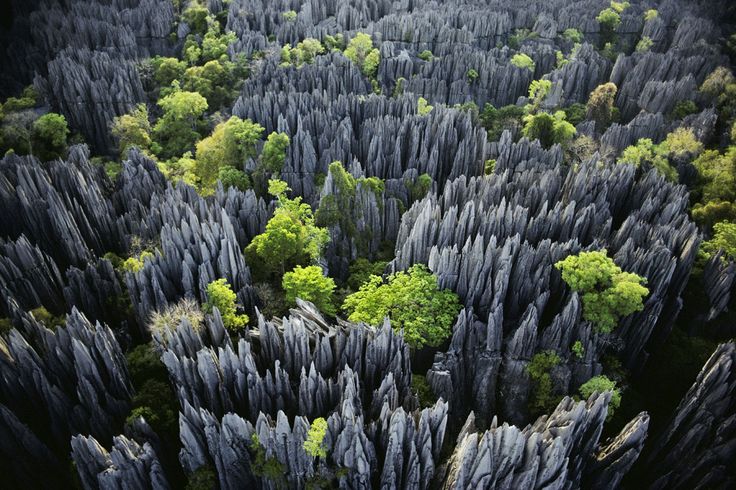 Another of the UNESCO Heritage Sites, the Forest of Knives has been created over time as water cut both vertically and horizontally into the natural limestone creating a forest of towering spikes covering more than 300,000 acres when you also include the neighboring nature reserve. It is a naturally occurring maze and extremely dangerous to traverse. Some of the razor sharp spires have reached heights of more than 150 feet and the entire area is littered with caves and crevasses. Also some of the most unique and intriguing wildlife in the entire world have found ways to adapt and live well within. In my opinion this would make a perfect little setting for some nasty traps, or a hard-to-find dungeon.

The Cave of Crystals, Mexico 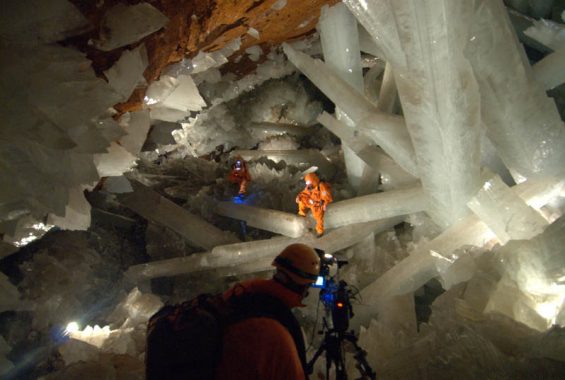 In Naica, Mexico, there is a cave connected to the Naica Mine almost 1000 feet below the surface. This cave has been dubbed “Cueva de los Cristales” or “The Cave of Crystals” and for very good reasons. The selenite crystals in this cave are some of the largest in the world; the largest recorded being 39 feet long, 13 feet wide, and weighing more than 55 tons. The cave is also a natural pressure cooker reaching temperatures of more than 130° F and humidity of 99%. These temperatures and humidity levels are made possible by a magma chamber located below the crystal chamber which superheats the groundwater between the two. The main cave was only discovered in 2000, but other smaller caves, with smaller crystals, were first stumbled upon as far back as 1910. Thinking about D&D, I believe that a cave like this would make for a fantastic dungeon theme and even a more fantastic backdrop for a major boss battle. 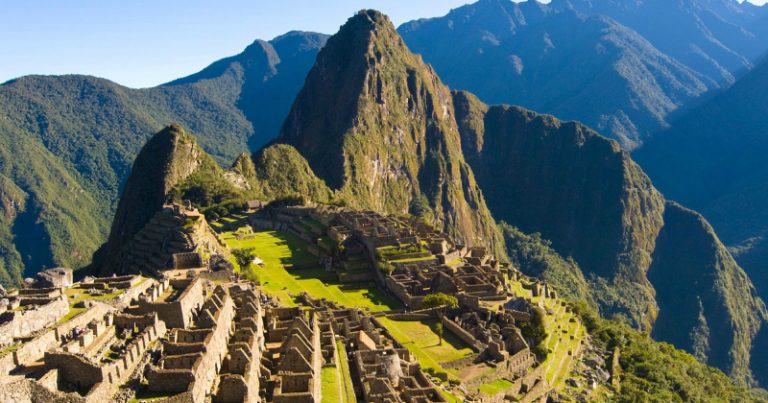 The Incan Temple City built around 1450 and abandoned just over a hundred years later. It was one of the grandest accomplishments of the Incan Empire before it fell into sickness and death brought on by the Spanish Conquistadores. Located almost 8000 feet above sea level on a mountain ridge overlooking the “Sacred Valley”, Machu Picchu is a beautiful combination of citadel, city, and place of worship. The city itself is divided into two main areas, the upper section and the lower. The upper section is where you will find the larger temples, the noble residences, and the royal palace. The lower section houses the common residences, warehouses, and industry. Although only officially discovered in 1911, there is evidence to suggest that previous treasure hunters and grave robbers had been scavenging the site as early as the mid 1800s. And, for D&D purposes, I really like the idea of a magnificent mountain city abandoned by its creators due to sickness and plague. That story is just rife for any DM or adventuring group.

The Lost City of Petra, Jordan 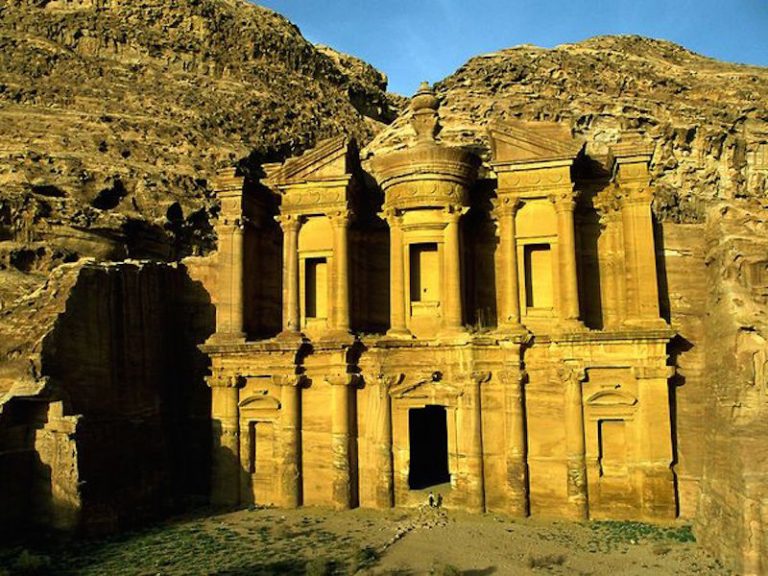 For anyone that’s ever watched Indiana Jones and the Last Crusade, this majestic location served as the resting place of the Holy Grail. It has also been featured in dozens of television shows, music videos, and video games for its mysterious beauty and ancient architecture. Believed to have been constructed between 500 and 300 BC, this city was partially built right into the cliff faces and has withstood Roman rule, earthquakes, multiple wars, and even a period of almost 500 years where it was practically forgotten and had to be rediscovered in 1811. It was designated a UNESCO World Heritage Site in 1985. Incorporating this world wonder into a D&D campaign could be a great way to introduce a hidden city or civilization, or perhaps the hidden entrance to a grand dungeon or ruins.

A Writer’s Guide to Roleplaying: The Price ...