The Lazy Guide to Larping 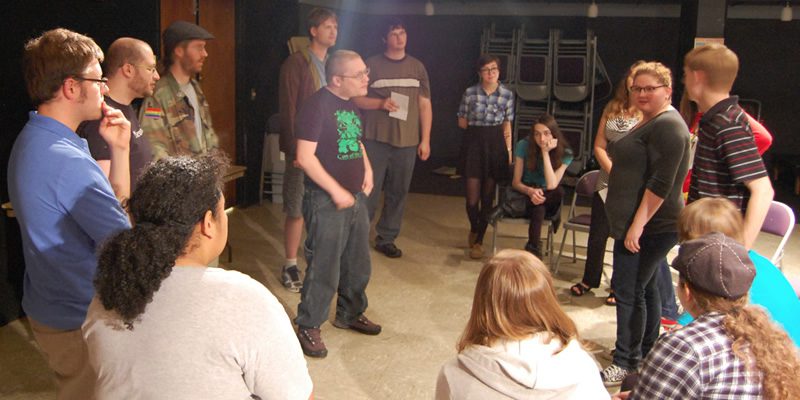 This weekend we have a guest post from Alex Roberts!

When you think of live-action roleplaying, you might think of foam-padded weapons, vampire politics, or an evening of mystery with elaborate costumes. Those are well-known and popular styles of larp for a reason – they’re a ton of fun! I encourage you to learn more about established forms of larp, and track down a local event!

But what if, like me, you find a long-running game with elaborate setup more intimidating than exciting? Campaign larps can have hundreds of pages of rules (and years of backstory) to absorb. Combat larpers will happily lend you a sword for your first game, but eventually you’ll want to craft your own weapons and garb. Even a parlour game can require background reading and some costuming effort. That’s just to attend – running such events is a significant undertaking. The great rewards of such play often require a heavy investment.

Luckily, there’s another way to dip your toes into the wide world of larp. It’s easy to pick up, costs almost nothing, and you can run it in your very own home. We call it American Freeform.

American Freeform is best summed up as a hybrid of indie tabletop RPGs and what some North Americans call “Nordic Larp.” For the story of how these two traditions met, mashed up, and made something new, I’d recommend Lizzie Stark’s Pocket Guide to American Freeform.

“Indie” isn’t a very good descriptor, but let it evoke rules-light systems that incorporate unusual subject matter and a strong emphasis on scene-by-scene cinematic storytelling. They use mechanics to create dramatic arcs, rather than positive or negative outcomes for a specific character. Think of games like Fiasco, Dread, or Apocalypse World and you’ll be in the right ballpark.

When someone says “Nordic” larp (larp in the Nordic countries is just as diverse as it is in North America) they’re probably referring to games from the Jeepform or Fastaval traditions. Both are known for tightly focused one-session scenarios, usually hinging on a single event, exploring mature subject matter. They include workshops upfront and debriefs after that are considered essential phases of the game.

These are generalizations, of course, with many exceptions. The point is that innovations in the world of tabletop roleplaying have been grafted onto experiments in the world of larp, and the results are amazing. Freeform games are short, intense one-shots where interpersonal drama is the primary focus of play. Games are usually a series of scenes, rather than one continuous event. You’ll find a dearth of competitive (ie: combat) mechanics, and frequent use of meta-techniques, which allow players to communicate internal experiences without breaking character. Players usually have equal knowledge of the plot (secrets are rare) and work together to share a memorable experience.

WHY SHOULD I CARE?

Larping is awesome, but certain styles have significant barriers to entry. The cost of admission fees, travel and materials can add up. Many people can’t commit to to an ongoing campaign because their schedule is inconsistent or their free time is scarce. For some, self-consciousness and the fear of embarrassment keep them from taking the live-action plunge. Addressing these issues is where American Freeform shines.

All the games I’m about to recommend can be played in the comfort of your own living room. I played Jay Treat’s Damned Love in the kitchen/living/dining room of my bachelor apartment, for example. Most scenarios are written for 3-12 people and one play area. The open fields of boffer combat or crowded clubs of some vampire games are amazing, but being outside or in public is absolutely not necessary! Freeform larping is a lovely rainy-day activity; if you have a few friends and a room with some chairs in it, you’re pretty much good to go.

Minimal sets and sparse, abstract props also make this style of larp very affordable. You don’t have to rent a town hall to play Willow Palecek’s The Boy Who Cried Werewolf or buy a bunch of sex toys to play Kat Jones and Julia Ellingboe’s Cady Stanton’s Candyland. In fact, the most common price of admission is $0. The majority of games are available online for free. Your biggest investment will probably be nametags and sharpies.

What has made this style of gaming most accessible for me is the low time commitment. Playing a game will take perhaps 3-4 hours; preparing to run one might take less than an hour. One of my favourite games, Sara Williamson’s Group Date, takes about fifteen minutes to read and two hours to play. That’s true of most games in the 2014 Golden Cobra Collection, a game design contest where easy prep and quick play were key judgement criteria. Many new larpers find these parameters more appealing than a weekend-long or multi-session campaign. First-timers seem to like knowing that whether they love it or hate it, they’re only on the hook for a few hours.

BUT IS IT FUN?

I’ve established that freeform-style larping doesn’t ask much of you – but what do you get out of it? Are the returns as light as the investment? Not at all. American Freeform is easy to get into, but it’s also easy to get hooked on, because it’s just so damned fun. The drama is high, the play is intense, and the subject matter ranges from the deepest tragedy to the sweetest, most lighthearted comedy.

Short timeframes mean that games jump right into the heat of the action. As players, your job isn’t to succeed, or even necessarily survive, but to create the best experience for yourself and each other. That might mean pushing an agenda, stirring up trouble, or shining the spotlight on another character – whatever keeps the story fresh. Facilitators (GMs) just need to offer scenes that spark interesting moments, and cut those scenes judiciously once the important beats have been hit. Freeform games can jump around chronologically and geographically, and are almost never competitive. It’s easy to have fun when everyone involved is working to make it that way!

A hallmark of freeform games is the importance of warmup and debrief exercises. Warmups really add to the fun. If you’ve ever taken an improv class you’ll know what I mean: mini-games designed to get people interacting with and playing off of each other. They also function as icebreakers; a good warmup can do wonders for those first-larp jitters. A debrief is a semi-structured opportunity to talk about the game after play is over. It might be a very serious discussion, or a giggle-inducing swap of funny moments. Either way, it’s important that everyone has a chance to process the experience and express themselves.

Some of you may be wondering: this comes from Nordic larp? Isn’t that the dark, depressing, heavy stuff? Well, iit certainly can be! I’ve been in larps about abuse, addiction, and death. They were all profound experiences that I treasure. But just because that stuff exists doesn’t mean you have to play it! I’ve also been in larps about love, hope, and absolute nonsense. Nick Smith and Jake Richmond’s Sea Dracula is about dancing animal lawyers. Jason Morningstar’s Superhero Bakery is about supervillains making sweet treats. Papers can only be described as a nihilist corporate retreat. I could go on! The American Freeform tradition, despite being in its infancy, has an incredible diversity of genres and styles. New games are being produced all the time, and there’s bound to be something out there that appeals to you.

BUT I’M A TABLETOP GAMER!

Freeform games tend to incorporate more tabletop mechanics than other styles of larp – they’re sort of a halfway point between the two. If you’ve been roleplaying at the table, then you already have a skill set that will help you understand and enjoy live-action gaming.

You can create and inhabit a character. Even if you’ve never GMed a game, you know how to come up with a character that will both add to the overall game and be interesting to you personally. In tabletop you spend most of the time talking meta (speaking about the game, referring to your character in third person) and do occasional scenes of roleplaying. In freeform the ratio is reversed: you’ll embody your character for most of the larp, with occasional meta-discussion. But you already have experience with both, so you’ll feel right at home.

You know how to set up a scene. If you’re playing Apocalypse World, you know how to say “I want the two of us to have a scene on the bridge where I finally accuse you right out! Oh, you want to be there too, clinging to the underside of the bridge? Let’s do it!” If you’re playing D&D, you know that a scene where your party politely asks a shopkeep where the local bad guys are isn’t half as fun as a scene where some assassins get the drop on you, but you fight them off, and find the seal of a particular noble house on their daggers. In a freeform game you’ll create scenes on the fly, asking yourself: “What would be funny/sad/interesting? And how can I make that happen right now?” As a tabletop gamer, you’re so used to answering these questions you may not even realize you’ve been asking them.

Ultimately, a freeform game will ask of you just what a tabletop game does: that you learn some rules, and play. It might be a bit lighter on the former and heavier on the latter, but there’s nothing esoteric about larping. Jump in! You might totally fall in love with American Freeform. But you’ll never know unless you try, right?

Alex Roberts is the enthusiastic host of BACKSTORY, a podcast where she chats with game designers and other notable members of the tabletop and live-action roleplaying community. In another life she made and wrote about video games. You can keep up with her many projects on Twitter and Google+.