What Tabletop Can Learn from LARPing 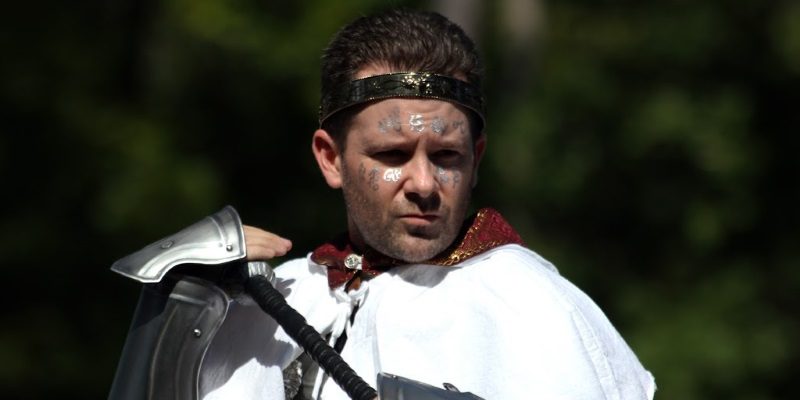 In last week’s article, I laid out a (very) basic introduction to LARPing for veteran tabletop gamers. Now I want to talk about the lessons I’ve learned from running LARPs that I find especially applicable to tabletop game-running. I’m coming almost exclusively from campaign-style boffer LARPing; if you want to discuss lessons learned from other LARPs, Tribality.com is known to host guest writers from time to time.

By default, campaign-style boffer LARPing loots from tabletop games anything that isn’t nailed down and can’t be pried loose. Designers and game-runners should always be looking for ideas they can repurpose, and tabletop gaming is a deep well. It’s time to turn that flow of application back around. The areas I want to tackle today are villain presence and challenge variation.

In D&D and related games, I think the default assumption is that players learn about the main villain they’re going on the adventure to fight, but the first time they encounter the villain is usually the last time they encounter the villain. This does sometimes happen in LARPs, but if you have to build props, acquire costuming, and write a briefing for a villain… you really want that villain to get a little more face time. The larger playerbase of LARPs is also more likely to lead to moments of, “Who was that dude, and why did we just murder him in the face?” Jokes about murder-hobos aside, the deeper meaning of that question is, “Shouldn’t I have a greater sense of narrative satisfaction right about now?”

LARPs handle this by concocting reasons in the story for the villain to encounter the players without the players killing the villain. This occasionally happens in published adventures for tabletop games, but I think that it needs to happen more often. There are any number of different justifications for why the PCs can’t stab the villain right now.

The point of all of this is to build a relationship between the PCs and the villains over the course of multiple encounters, so that when the PCs finally do fight the NPC to the finish, there’s a complex emotional response. That might be dancing on the corpse or the complex regret of defeating a foe that, despite themselves, they respected – any response is better than “who was this dude again?”

The second big lesson that I learned from running LARPs is about varying up the challenges. In many games, despite the expectation that boffer combat will be part of gameplay, it isn’t part of every player’s gameplay. Some players never invest in combat skills, or never more than rudimentary combat skills, because the LARP provides locks, traps, puzzles, interaction, espionage, crafting, non-combat physical challenges, and so on as robust elements of the game. As a result, there are whole adventures that emphasize everything but combat, and I’d like to see more tabletop adventures that took a similar risk.

At least in D&D, there’s no way to avoid being at least passable at combat. Since the designers expect combat to be part of literally every PC’s gameplay, this is a good thing – ruining your own fun with an under-informed build decision is not great. Since everyone has presumably sunk build choices into getting still better at combat, adventure writers use lots of combat as an opportunity for players to enjoy the effects of their decisions. On the other hand, thanks to Backgrounds and limiting the DCs of skill checks, 5e does a great job of making sure that everyone can participate in one or more non-combat areas.

There’s nothing wrong with combat that more variety of encounters wouldn’t fix. If the PCs are choosing combat when the DM hoped or planned for negotiation, that’s on them – but complex skill challenges are an under-developed area of gameplay in most games. Everyone has their own pet theories as to why 4e’s skill challenge system didn’t quite work; most of these theories are correct, but it was still a valiant attempt on WotC’s part. I hope that a new and widely-used skill challenge system emerges for 5e.

You can also wedge other kinds of challenges into the midst of a combat encounter. This is a great way to increase the overall challenge of an otherwise low-threat encounter. Don’t be afraid to have infinitely-spawning low-end creatures – shadows, mephits, dretches, and so on – that aren’t individually much threat to the PCs, but the fight doesn’t end until the PCs flee or solve whatever challenge they can’t simply stab.

Take this example from an actual Dust to Dust event. The PCs traveled through a portal to a Realm Above (Outer Plane), to a place where there was a powerful magical forge. They found a huge field full of gargoyles, an unlit forge, and a terrified (but not hostile) ghost that was under attack from an unseen force. The gargoyles attacked, which was a pretty manageable level of threat; when gargoyles were killed, they respawned a modest distance away and rejoined the fight. Some of the gargoyles left behind a small glowing orb when they crumbled; the PCs had to gather the glowing orbs, carry them back to the forge, and cast them into the forge to re-light it.

The ghost is destroyed, and the unseen attacker appears – a partially-out-of-phase version of one of the main campaign antagonists. This was the first time that they had seen him, and he only intermittently paid attention to them, but whenever he attempted to walk through their battle-line, he killed them quickly if they didn’t move out of the way.

When the forge was sufficiently hot from glowing orbs, the PC smiths hammered on the magic item they had come all this way to create, and waited for the forge to cool again (these things happen when you’re dealing with a cosmic forge to which souls are sacrificed). While waiting for the forge to cool, the PC smiths could take part in the rest of the battle that was going on around them. The cycle of gathering orbs, transporting them, and fueling the forge with them repeated two more times, and then the PCs went back through the portal – leaving a small contingent behind to stop the out-of-phase boss from following them back home. But that’s another story.

In practical D&D terms, the PCs were fighting a modestly tough opponent in substantial but not overwhelming groups. When the creatures dropped orbs, the PCs collected them with Use an Object actions – and remember, in 5e you get one of these as part of each turn (PH, p. 190). They had to move through the chaos of the battle with them. It’s good to get PCs move more in D&D fights – it emphasizes the benefits of feats like Mobile and Sentinel, induces PCs to risk opportunity attacks, and makes the rogue’s Cunning Action (Dash) look even more wonderful.

The crafting portion of the combat was not a challenge, per se, unless the PC smiths got interrupted by gargoyles reaching them. You could think of this as a series of actions that were just testing Concentration, but in 5e I guess you could attach some tool-use checks to this step. Failure isn’t all that interesting, except insofar as it stretches out the battle.

The partially-out-of-phase boss on the field was functionally invulnerable, but able to deal damage. The PCs had been warned well and thoroughly that he would be there, and they got that they needed to survive him while completing their goal. In terms of his effect on the battle, he forced the PCs to move; this is a little awkward to translate into a turn-based game, but I’d suggest having the DM announce at the end of the boss’s turn where the boss seemed likely to move, if not lured into going elsewhere.

There are endless variations on challenges that PCs have to solve while also fighting, and I would love to see published content experiment with more variation on the goals of combat encounter. Combat where killing 100% of the opponents is a marginal goal, or outright impossible, has a lot of rich ground for encounter design, and it has a huge effect on the tone and tension of a campaign.

Running LARPs has definitely made me a better DM. For a moment of full disclosure, I learned most of this from watching other, very very smart people run LARPs, or working with them on those games. I hope that these suggestions and case studies are useful to you in your own game-running.