A Visit to the Shadowfell – Shadar-kai & More 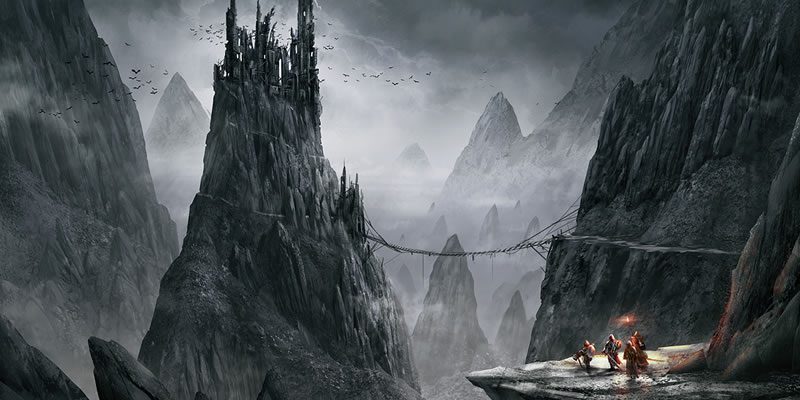 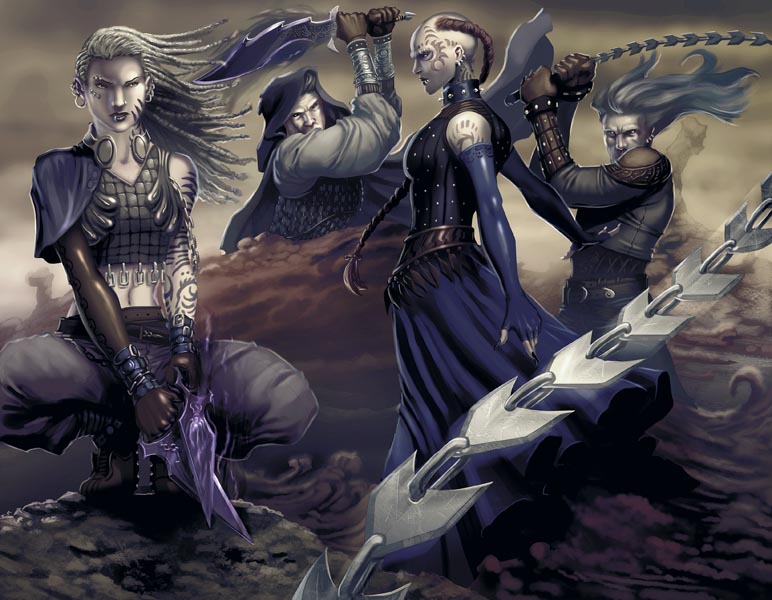 In D&D 3rd edition, the Shadar-kai were introduced as a species of fey found on the Plane of Shadow. By 4th edition (see Dragon Magazine #372), the Shadar-kai were set-up as the Fey of the Shadowfell, the opposites of the Eladrin of the Feywild. Ages spent in the Shadowfell have shaped the Shadar-kai into a people that live passionately and fearlessly to combat the apathy and gloom of their home plane. Shadar-kai society is meritocratic and based on power and prestige of great deeds. Most Shadar-kai do not fear death and live for the moment, or risk succumbing to ennui and fading out of existence, experimenting in all sorts of stimulation and extremes.

Cold of heart and dark of eye, passion burns still within these people of shadow and deep winter.

The goth-like, Shadar-kai seem to draw in the shadows around them. Their skin ranges from white to dark gray and their eyes are black and lustrious without any white or clear pupil. Their drab or raven black hair is often died and worn in a variety of styles including long and loose, braided, or elaborately shaved. Shadar-kai are usually depicted as having human looking ears. While drab in appearance, these people like dark clothing, jewelry and weapons decorated with a splash of color. They are usually found with tattoos, scarifications, and piercings.

Shadar-kai will occasionally take names from elves or humans, but they usually take names of heroes from their own people or great warriors they respect from outside their people.

Ability Score Increase. Your Dexterity score increases by 2, and your Intelligence score increases by 1.
Age. A Shadar-kai reaches adulthood at the age of 20 and generally live until they die from their extreme life or fade away centuries after their birth.
Alignment. Most Shadar-kai are chaotic neutral, but lean towards evil.
Size. Shadar-kai are similar to humans, but slightly shorter and thinner. Your size is Medium.
Speed. Your base walking speed is 30 feet.
Darkvision. Accustomed to the dim, colorless Shadowfell, you have superior vision in dark and dim conditions. You can see in dim light within 60 feet of you as if it were bright light, and in darkness as if it were dim light. You can’t discern color in darkness, only shades of gray.
Born in Shadow. You have proficiency in the Stealth skill.
Shadow Jaunt. As a bonus action, you move like a wraith and teleport up to 15 feet to an unoccupied space you can see. You regain the ability to do so when you finish a short or long rest.
Winterkin. Due to your connection to the Raven Queen, you can reroll a failed death saving throw. You regain the ability to do so when you finish a long rest.
Shadar-kai Weapons Training. You have proficiency with the spiked chain and whip.
Languages. You can speak and write Common and one extra language of your choice.

Other Inhabitants of the Shadowfell

Having just the Shadar-kai isn’t enough. You need more monsters, so try out some of these ideas:

The main cover illustration is from the 5e DMG.
The illustration of Shadar-kai by Chris Stevens and Espen Grundetjern accompanied the race’s description in the 4e MM.