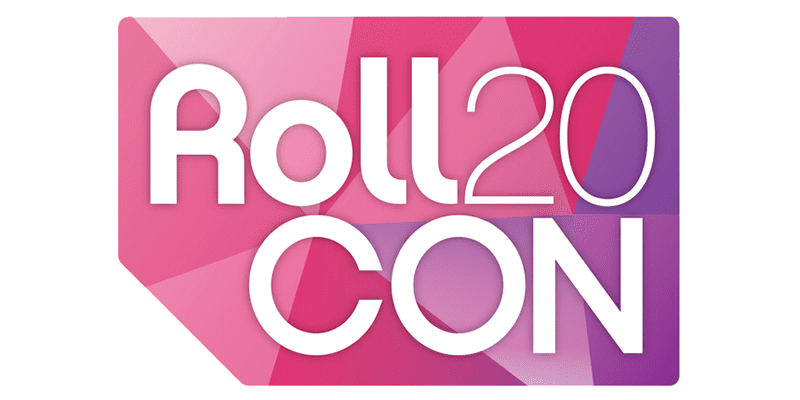 Just over a year ago I interviewed Nolan T. Jones, co-founder of Roll20. This time we’re checking in with Nolan to talk about Roll20CON which is being held on June 3, 2016 and it’s FREE!

Shawn: Hi Nolan! Thanks for taking a little bit of time to chat about Roll20CON today. I’m sure you and the team are busy getting ready for the big event, but I have some questions for you I’m hoping you can answer.

Nolan: Thanks for chatting with me again!

Shawn: No problem, it’s my pleasure. Let’s get started!

Shawn: Can you tell our readers a little bit about Roll20CON, your online-only tabletop gaming convention?

Nolan: In short, it’s a celebration of the Roll20 community. Lots of games (including lots of streamed games with some Twitch favorites), a few panels with really amazing industry folks, and a big push for our charity partners Cybersmile.

Nolan: I think it finally became a, “if not now, when?” It helped that we brought on two more contractors at the start of the year and decided before they got bogged down with all the other things that go into running Roll20, we should push to make a convention happen.

As for what’s different from our imaginings… as with most things Roll20, the biggest difference from concept to reality is that it’s bigger. More and more people keep showing up and it gets hard to wrap our heads around it.

Shawn: How did you get connected with Cybersmile and decide to support them through a portion of the profits of Roll20CON?

Nolan: When we set out to make Roll20CON, we had a short list of folks with thought about looping in as a charity. Conversation after conversation, Cybersmile stayed at the top of the list as a strong fit. We reached out, and they were really excited about the event so here we are! It’s worth pointing out that we’re not doing a “portion,” but we’re specifically setting up full direct donations to them (and some of our exceedingly radical Marketplace creators are incentivizing donations with a special Roll20CON pack).

Shawn: I’m already running a game with my regular Friday night group on Roll20, what do we have to to do to make our game part of Roll20CON?

Nolan: Whether you’re starting a new game, or editing your current game in Roll20, there’s a prompt currently to make it part of the official convention count / get free Dynamic Lighting for June 3rd: 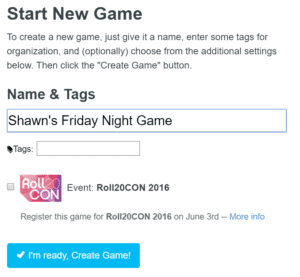 Nolan: So it’s basically as easy as clicking a box!

How would someone who is new to Roll20 or not already part of a game on June 3rd get involved in Roll20CON?

Nolan: If you’re looking to play, head to our registration page. From there you’ll get links to our “for Game Masters” and “for Players” areas that put you in the mix for the day of the convention.

If you’re simply looking to spectate, head on over to Roll20 on Twitch! 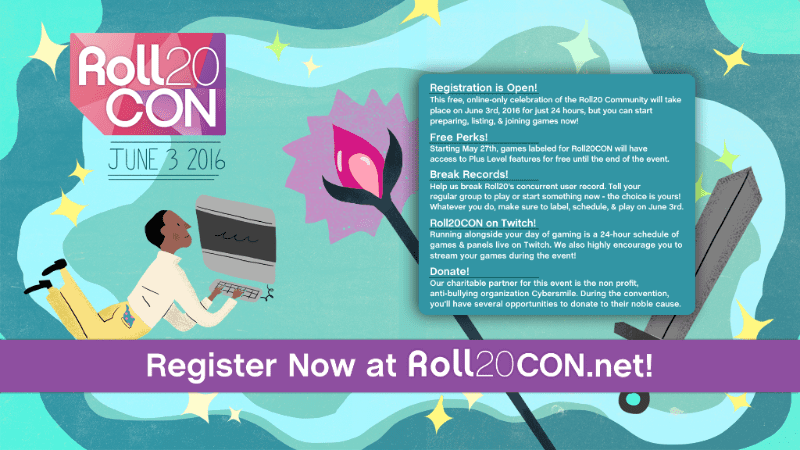 What is Roll20’s concurrent user record? How early in the day do you expect to beat it?

Nolan: I believe we’ve hit 13k previously (we’ll look at the next few weekends with the expectation that it might go a little higher)… but my bets would have us surpassing the overall record as Pacific Time Zone gets off work that Friday. That said, I expect to set some midday records as well, particularly with international players!

With all these extra people, should people be worried about Roll20 being slow or even being unavailable?

Nolan: I think we’d be crummy hosts if we as Roll20 weren’t worried, but I generally don’t think users should have to be concerned. We’re taking a bunch of precautions with our hosting for the day, and our full staff will be around should any issues arise. We’ve got a really good track record as far as uptime is concerned, and we intend to maintain that.

Before I let you go, is there anything else you’d like to tell our readers?

Nolan: Even if you won’t be able to be a part of Roll20CON, make sure to keep your eyes peeled for a big announcement coming out of the convention…

Shawn: Thanks for that chat Nolan. Talk to you soon and all the best with the preparations for Roll20CON!

About Roll20
Roll20 began as an effort to keep developers Riley Dutton, Richard Zayas, and Nolan T. Jones in touch via long distance gaming. Since launching via Kickstarter in 2012, it has attracted over 1.2 million users as a free service. The program continues to be funded by subscribers who receive features that assist advanced gameplay.

About Cybersmile
The Cybersmile Foundation is a multi award winning anti cyberbullying non­profit organization. Committed to tackling all forms of digital abuse and bullying online, they work to promote diversity and inclusion by building a safer, more positive digital community.

Interview from the Shed – Adventures from ...