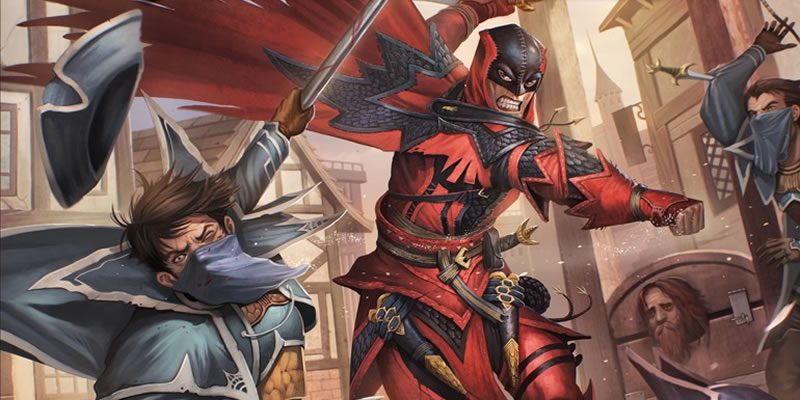 Paizo released Ultimate Intrigue back in April for the Pathfinder RPG. The book gave players the chance to play a caped crusader with the new vigilante class and provided rules & support for GMs to run “daring heists, extended pursuits, and tense searches“. This month we see support for more intrigue style play with the release of Inner Sea Intrigue, for the Pathfinder Campaign Setting. This book provides Golarion specific intrigue support to go along with Ultimate Intrigue.

Update: The book is in stores and the PDF is available May 25th, 2016 From Paizo’s product page for Inner Sea Intrigue: 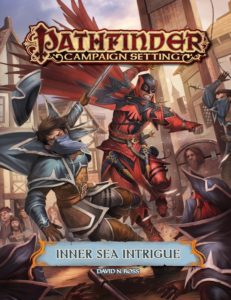 From the infamous thieves’ guilds of Absalom to the rebel networks of Galt, the poisoners of Daggermark to the secret courts of Taldor, cloakand-dagger plots manipulate fates across the Inner Sea region. With Pathfinder Campaign Setting: Inner Sea Intrigue, you’ll learn the truth hidden beneath the surface and discover ways to make it work for your benefit. New insights on social combat, misleading magic, and secret academies allow the techniques introduced in Pathfinder RPG Ultimate Intrigue to shine. Sneaky new equipment, magic items, and spells also present a spectrum of options for deceptive heroes and unlock the powers of the new vigilante class for heroes and villains alike. Learn the hidden arts of the Inner Sea region and unleash the powers of stealth and subtlety in your Pathfinder RPG game!

Among the secrets revealed within are:

Inner Sea Intrigue is intended for use with the Pathfinder Roleplaying Game and the Pathfinder campaign setting, but can easily be used in any fantasy game.

I really liked Ultimate Intrigue‘s Vigilante and intrigue play support and I’m looking forward to this book too.

Swashbuckling Enemies and Allies from the Three ...