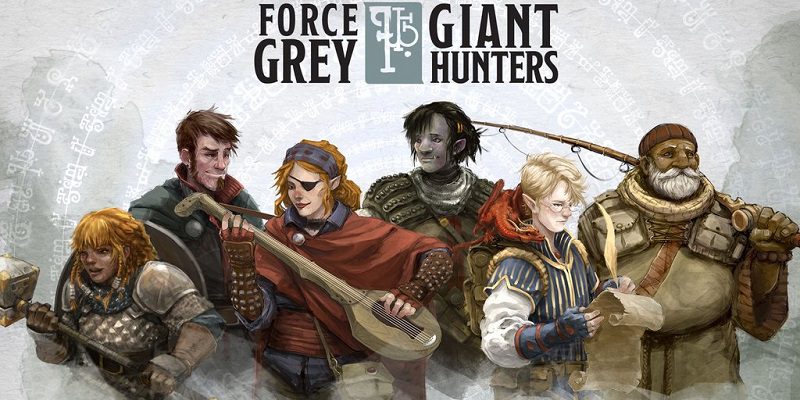 Actors and Comedians from @Midnight with Chris Hardwick, The Mindy Project, Blindspot Play D&D at Meltdown Comics this Summer

RENTON, Wash.- June 2, 2016 – Wizards of the Coast announced Storm King’s Thunder, the new storyline for Dungeons & Dragons coming Fall 2016. Giants are rampaging the land, the sea, and the skies and the peoples of the Forgotten Realms need a team of heroes to help them. D&D fans will get a preview of Storm King’s Thunder this summer with Force Grey: Giant Hunters, an eight-episode weekly show starring an unlikely group of comedians and actors, co-produced by Nerdist and Geek & Sundry.

The cast for Force Grey: Giant Hunters was unveiled at D&D Live from Meltdown Comics yesterday. Utkarsh Ambudkar (The Mindy Project, Pitch Perfect), Jonah Ray (The Meltdown with Jonah and Kumail on Comedy Central), Brian Posehn (The Sarah Silverman Program), and Shelby Fero, comedian and writer, along with Matthew Mercer and Ashley Johnson (currently on NBC’s Blindspot) of Geek & Sundry’s Critical Role and Chris Hardwick (founder of Nerdist and host of Talking Dead and @Midnight) will entertain D&D fans by rolling some dice, making each other laugh, and playing through a new Storm King’s Thunder adventure developed with the D&D story team. Look for Force Grey: Giant Hunters to debut this summer on Nerdist.com!

Watch Matthew Mercer and the cast talk about their characters, as well as hear details about the Storm King’s Thunder story and products from Mike Mearls and Chris Perkins, with D&D Live from Meltdown on the D&D channel on Twitch and YouTube.

“The popularity of Dungeons & Dragons has never been so strong and it is always so exciting to hear stories about who plays D&D in Hollywood,” said Nathan Stewart, director of Dungeons & Dragons. “I can’t wait for fans to tune-in to watch all these hilariously talented people playing D&D. We think this is a really fun way to preview Storm King’s Thunder while waiting for the new adventure to come out.”

Players can start playing their own campaigns when Neverwinter, the Dungeons & Dragons-based MMORPG brings a new expansion for Storm King’s Thunder on PC in August 2016. The Storm King’s Thunder tabletop RPG adventure releases wide on September 6 as a hardcover book and digitally on Fantasy Grounds, the online tools that enable a virtual tabletop online for gaming groups. D&D also announced Volo’s Guide to Monsters, a book full of lore and background on monsters such as mindflayers, orcs and beholders as well as a limited edition cover coming to gaming stores this fall.

For more information on Dungeons & Dragons, including details on all of the new products supporting the Storm King’s Thunder storyline from Wizards and our partners, please visit https://www.dungeonsanddragons.com.

Wizards of the Coast LLC, a subsidiary of Hasbro, Inc. (NASDAQ:HAS), is the leader in entertaining the lifestyle gamer. Wizards’ players and fans are members of a global community bound together by their love of both digital gaming and in-person play. The company brings to market a range of gaming experiences under powerful brand names such as MAGIC: THE GATHERING and DUNGEONS & DRAGONS. Wizards is also a publisher of fantasy series fiction with numerous New York Times best-sellers. For more information about our world renowned brands, visit the Wizards of the Coast Web site at www.wizards.com.

Nerdist is a multi-platform creator of genre and popular culture content. Founded by CEO Chris Hardwick, its online presence includes Nerdist.com featuring Nerdist News hosted by Jessica Chobot as well as weekly shows Because Science and The Dan Cave; a Podcast Network including the flagship Nerdist Podcast; The Nerdist School comedy training program; and the Nerdist Alliance, a community of curated partnerships with some of YouTube’s most talented creators. Nerdist also produces content for television including @midnight for Comedy Central. Nerdist is owned by Legendary Entertainment and is part of the Legendary Digital Network which also includes Geek & Sundry and Amy Poehler’s Smart Girls.

ABOUT GEEK AND SUNDRY

Geek & Sundry is a digital entertainment company recognized for providing the best in award-winning Internet television content featuring leading voices in geek culture and lifestyle. Founded in 2012 by Felicia Day, the company offers a diverse content lineup of video games and tabletop gaming, such as Wil Wheaton’s TableTop, and explores the verticals of comics, music, literature, comedy and beyond. The network has also recently launched GnSLive on Twitch that provides of 30 hours of live content every week. Geek & Sundry is owned by Legendary Entertainment and is part of the Legendary Digital Networks which also includes Nerdist Industries and Amy Poehler’s Smart Girls.