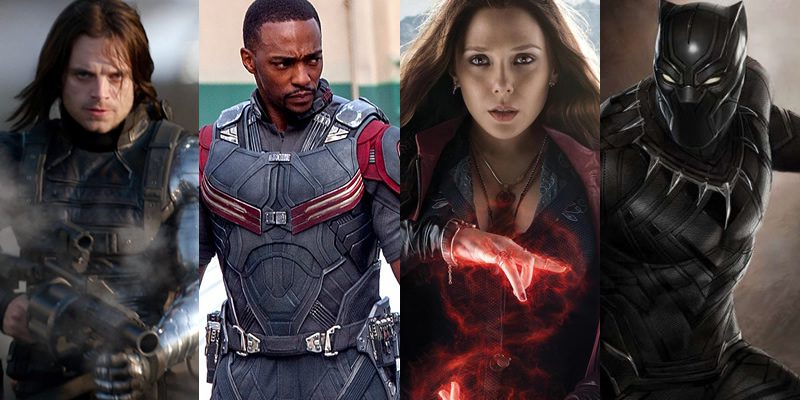 Captain America: Civil War has been out since May 6th and has already made over a billion at the box office worldwide. Whenever a superhero movie comes out, I can’t help but think about how I would build the heroes and villains.  Trying to create super hero player characters for D&D has its flaws (but they’re still fun to build like the 6 Avengers I built last year).

This week on the Campaign Trail I thought I’d offer DMs some premade characters to use or for players to look at for ideas when creating their next PC.

I’m just a guy with dice and a pencil, so what do I know. If you have a better build idea share it in the comments! Love it or hate it… here it goes.

James Buchanan “Bucky” Barnes had his physiology enhanced like his best friend Steve Rogers, but Bucky’s enhancements are the result of HYDRA experiments. While Cap (and his magic shield) controls the battlefield, the Winter Soldier attacks his enemies before they know what hit them using ranged and melee attacks. At first I thought an assassin/shadow monk build might work. I changed my mind and went with the assassin, but started Bucky with 2 levels of fighter to match up with his experience in World War II, fighting alongside Cap and the Howling Commandos. I think Bucky’s alignment was changed pretty drastically when he became the Winter Soldier, but I’m not sure he is back to being good and heroic yet. The Winter Soldier is strong and nimble, providing lots of variety in the weapons and ways to attack available to you.

Sam Wilson, is Cap’s new best friend and a highly trained Air Force paratrooper. The cinematic version of Falcon employs mechanical wings and a jet pack to fly and a bird like drone for surveillance named Redwing. For this build you’ll see that I use Aarakocra stats to get Sam his wings and flight. For the connection to Redwing I thought a simple homebrew magical item might work better than having Falcon take levels in Ranger. But I changed my mind and you’ll see this Sam splitting ranger and fighter levels pretty evenly. If you are a DM or have a DM who does not care too much I would swap out the unarmed strike and Aarkaoka language to put his speed back up to 30 feet.

Wanda Maximoff, the Scarlet Witch, grew up as an orphan with her twin brother, Pietro, which you will see reflected by her Urchin background. In an effort to help stabilize their purge their country of Sokovia, the twins agreed to undergo experiments. Wanda attaining various telekinetic, telepathic and energy manipulating abilities. After a bunch of stuff in Avengers 2 the twins switched sides and joined the Avengers, but Wanda’s twin Pietro was killed and her country was devastated. I thought a warlock was the best way for Wanda to gain telekinetic, telepathic and energy manipulating abilities. The war caster feat reflects Wanda’s training with the Avengers and her experience casting spells while in combat.

T’Challa has a brilliant mind and is physically gifted, being a master martial artist and acrobat. Like so many of the marvel heroes, there are not enough points to give T’Challa all the abilities he deserves. This build will attempt to create a PC that is fun and matches up with the Black Panther we saw on screen. While I didn’t have the Winter Soldier go with any levels of monk, T’Challa seemed like a really great fit for monk. I was planning to take levels as a shadow monk, but I’m crazy and decided open hand monk and hunter matched his background and single minded hunt for the Winter Soldier. T’Challa’s noble background reflects his position as King of Wakanda and experience with diplomacy and statecraft. His 18 AC can represent both his ability to dodge attacks and his suits abilities to absorb some damage too.

Can’t get enough Avengers, try creating some of the other heroes such as Spider-Man, Ant-Man, Vision and War Machine (or even some of the villains). Check out my Guardians of the Galaxy PCs or Fantastic Four NPCs.

Let us know what you think of the builds above and how you’d improve them in the comments below (and please link to your own superhero builds).