The Secret of Zir’an, Part 1 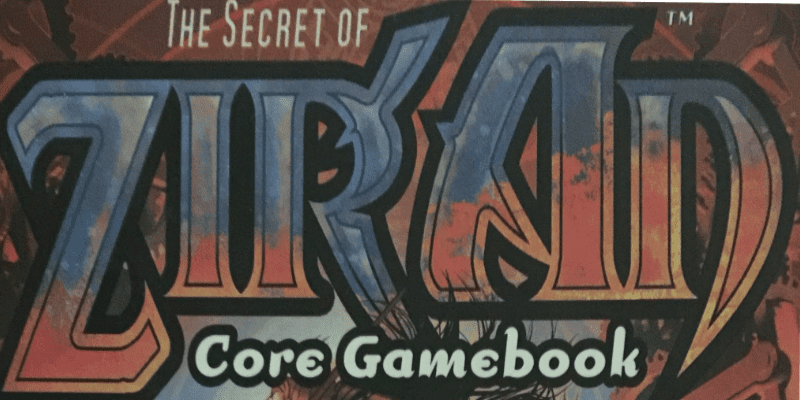 It all started with a trip to a small comic and game shop. Any time I visit one and have a pleasant experience, I pick up something to support the store. I found a few books that caught my attention, but narrowed it down to an EverQuest sourcebook by Sword & Sorcery or a book by Paragon Games called The Secret of Zir’an. As a long-time lover of EverQuest, I was naturally pulled to the guaranteed mess of the EQ sourcebook, but the strange World War I Magitech feel of the art in The Secret of Zir’an intrigued me. I decided to go with the unknown quantity of The Secret of Zir’an. Don’t worry. Thanks to inexpensive book market of the internet, I’m currently building out the Everquest RPG library. I will totally have a lot to say about these one day in the future. For now, let’s jump into The Secret of Zir’an.

The Secret of Zir’an was created by Paragon Games, and published through White Wolf Publishing in 2005. The core gamebook was to be the first in an extended product line, according to the blurb at the front of the book, but instead it was one of two core books released. The other core book is the GM guidebook, Hand of Fate, and one of three total books released. The Forbidden Bloom is third book in the line, and is the only published adventure for the setting. In other words, we have about 500 published pages of material total for this game. Comparatively speaking, this isn’t all that much.

As it turns out, The Secret of Zir’an is a well-known title in some circles. It seems to have a reputation as one of the worst RPGs ever published. Unlike some titles, such as F.A.T.A.L. or the World of Synnibarr, it’s not because of the content. Nay – in fact, the content is pretty darn interesting. It gained this ill repute from the background and emphasis printing in the book. Now, rumor has it that the printer screwed up the job, the company couldn’t afford a reprint, and the printer didn’t cover it. I obviously didn’t work there and I don’t know the story firsthand. What I do know is that portions of the book are like dragging your eyes through visual glass. 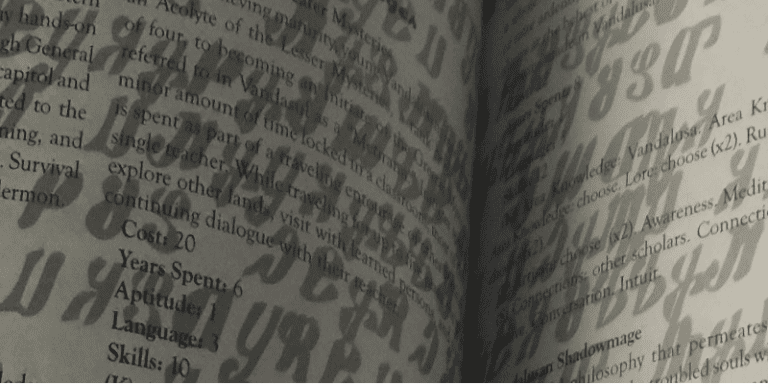 You see what I mean? This is truly unfortunate, because this game has “diamond in the rough” written all over it. The goal of this series is to comb through this inky muck and hopefully reveal the fabulous game I know is within.

One of my favorite things about the book is the little blurbs of flavor text that pop up. The most commonly seen blurbs are done in an old-timey newsreel style of reporting. Imagine the old propaganda footage that used to play before movies and you capture the style perfectly. It’s a great way to capture the pulp style of the setting with very little effort. In the words of Tom Haverford, “Smert. Real smert.”

In a lot of ways, the setting reminds me of Earthdawn and Shadowrun. Right from the start, the lore tells you the world of Zir’an is one of cycles. Empires continually rise and fall, only to have new empires rise and fall in their place, and so on. The world is filled with ruins and ancient secrets, creating a sort of self-sustaining market of adventurers. The twist in the game’s printed setting is that the most current epoch lacks the influence of the gods. Prior to the current age, the Seven Gods were deities with active participation in the world. However, as the Endwar raged and caused untold atrocities, everyone received an image of seven empty thrones in their minds. The gods had abandoned the world.

The current calendar counts from that point, and the modern day is some three thousand years following these events. There is a handy timeline to mark the major events in the game’s history, beginning with the departure of the gods. In the absence of the gods, the Fane have risen to power. The Fane are essentially evil demigods that control different empires and war against the Treaty Nations that oppose them. As you might expect, these Fane sometimes war against each other, with the world getting caught in the crossfire. Eventually, a hero named Kah united the people to fight against the Fanes, and the result was the Hegemony of the remaining Fanes and the Treaty Nations. The modern age is a period of roughly 1400 years since those events.

Modern religion focuses largely around the goddess of Fate, with a concept of many prophecies calling upon heroes to be Fate’s Chosen. Fate plays a huge role in the game, meant to entwine people through seemingly random events. However, Fate isn’t necessarily a force for good, as it is meant to preserve the Balance. The driving force behind Fate is to ensure things are remembered and have importance. The steady decline of a civilization isn’t desired, but the violent destruction of the same civilization fits within Fate’s goals. Really, you might as well name it Conflict and have done with it. 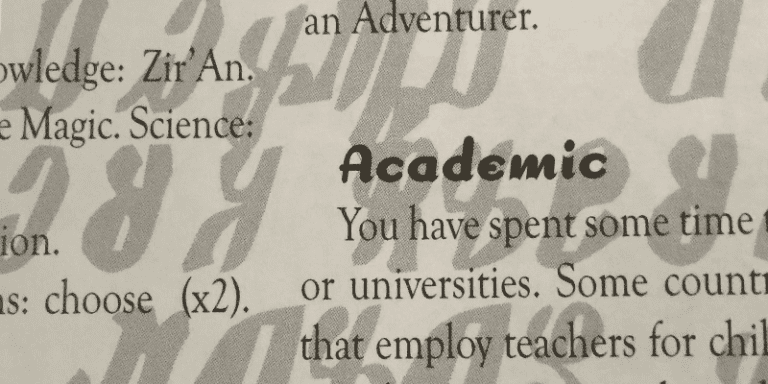 While I am sure the book goes into much further detail about the setting later on, the next segment is about the game’s system. The system is called the Finesse Game System. If I had to summarize it, it’s sort of a hybrid of the World of Darkness and d20. There are three areas of player customization: Stats, Aptitude, and Skill. Stats are affected by nationality and race choices, which we’ll cover later. There are four Main Stats with a point value generally ranging from 1-10. Stat values can exceed 10, but it represents exceptional prowess, bordering on the supernatural. Physique represents overall physical conditioning, Mass is used to describe physical presence (it can be fat or muscle depending on Physique), Intelligence measures depth and complexity of thought, and Acuity is how fast you process information.

Once you determine the four Main Stats, you can fill out your seven Derived Stats. Derived Stats are meant to be more or less balanced Stats. The idea is to prevent min-maxing to a certain degree, making every distribution having a pretty good place in the system. They are a combination of multiple Main Stats, usually divided by the number of Stats you are combining. Reaction is a combination of Physique, Intelligence, and Acuity, and represents how effective you are in combat. Speed is Acuity and Physique penalized by your Mass, and determines how fast you can act. Perception is Intelligence and Acuity, doing what it says on the tin. Shadow is a weird stat, representing your strength of spirit, will, and your magical attunement. Shadow is the average of your lowest stat and highest stat.

The final part of the Derived Stats are Hand-to-Hand damage, Vitality, and Lethal Wounds. Hand-to-Hand damage is a combination of Physique and Mass, heavily weighted. Vitality is a formula of weighted Mass and Physique, with some constants thrown in. Lethal Wounds are calculated solely by weighted Mass. These last two are a bit weird. Vitality is akin to an overall hit point total. Lethal injuries subtract from your Vitality total, but Lethal Wounds represents how much damage you can take to any one body part before beginning to bleed out. We’ll discuss this more in the combat section, but this sorta thing is prevalent in White Wolf games.

Aptitudes are general areas of expertise. Aptitudes are not modified by race or nationality choices, and have a point value of 1-5. Aptitudes are also interesting due to the way age works in the game. As you age, your Stats slowly decrease, but your Aptitudes increase. There are three Aptitudes: Knowledge, Personal, and Social. Knowledge is essentially any scholarly pursuit, Personal governs things you can practice, and Social is interaction with others. Further, Aptitude governs the Finesse Level of skills. 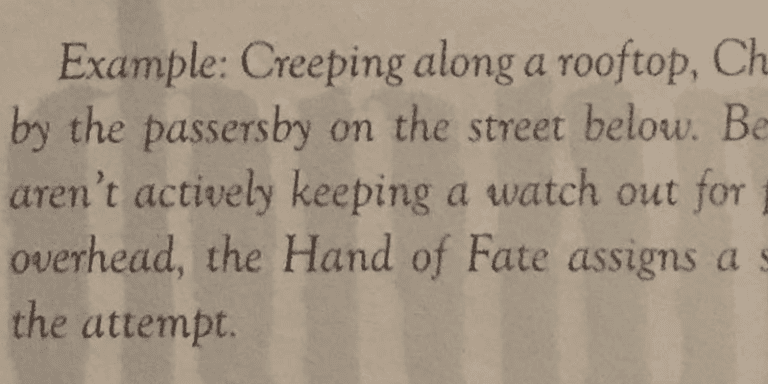 Difficulty of skills ranges from 10-25, with major differences coming every 5 points. Basic is described as something you can pull off with little trouble, Advanced is some doubt of success or a non-optimal situation, Expert is an actively troublesome situation where dire consequences could occur, and Elite is something you have never done before or is otherwise seemingly impossible. What’s great is the game stresses a few different brilliant things. First, don’t roll if your Finesse Level is higher than the difficulty. If you are an Advanced lockpick, a Basic lock isn’t much issue. The exception to this is Stress. If you are under Stress, you have to roll. Examples of Stress are injury, active pursuit, hindered in some way, hostile or extreme environments, and so on. Also, you can score Superior Successes. Every time you exceed your target by 6 or more, you may narrate an additional task or benefit related to your task that you accomplish. Since every skill test is an attempt at a specific goal, it’s a two-for-one type of result. Alternatively, if you use unrelated skills for a specific test, you can lower the Stress of the situation with Superior Successes. Anything that encourages characters to help with situations where they don’t have the specific skill is awesome, to me. Unskilled Tests can’t score Superior Successes, but you can attempt something without being skilled in it.

Contested Skill Tests work the same as other Skill Tests, only you compare the results rather than set a predefined difficulty. If one sides beats the other by 6 or more, it’s a Superior Success. Sometimes this is an opposing skill, like Stealth and Awareness. In other cases, like Leadership, it might be two people issuing competing commands. The book is nice enough to include a list of common contested skills. What’s cool about this is there are usually multiple options to oppose a skill. Anything that encourages differentiation is good with me.

This is a lot of detail, and falls pretty squarely between the White Wolf and D&D levels of detail. As an example of the system in action, if you were Advanced in Seduction, with a Social of 3,  a +1 Practice with Seduction, and had an Acuity of 7 (Acuity governs Seduction), then when you had to make a Seduction roll, you’d be rolling 1d10+11. Next time around, we will delve into the rest of skills, and possibly into character creation, too. It’s way too much to cover right now.

Overall, it’s nothing revolutionary at this point. The biggest thing is the system’s flexibility and the book’s GMing advice. The discussion of when to perform Skill Tests is a big deal, as it places an emphasis on narration and storytelling, supported by the system with mechanical outlines on when to engage. It’s pretty progressive stuff in that day and age, and it is still probably something of an eye-opener for a lot of people right now. A lot of the weirder and more unique stuff is yet to come. I know this will be a long series, but I think it’s well worth it for this gem.