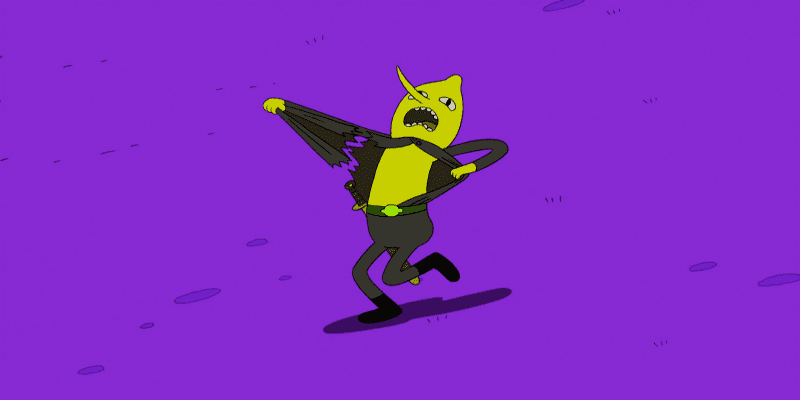 The current trend of power fantasy poses some interesting challenges for the modern GM. Anecdotally speaking, players are less fearful than ever, and engagement is only the barest of excuses to quip and preen. Again, this isn’t every game. Nor is it every player. It’s just a common enough trend amongst the people I know and the games I hear about to warrant some discussion. Let’s say you are in this situation. Fear isn’t something the party is willing to acknowledge, and being continually on the edge of death in combat can wear on any group. Variety is the spice of life, bro. So, what can you do to present a challenge to the players that encourages players to engage on multiple levels without violence and fear? When life gives you lemons, make Lemongrabs.

Lemongrab, the Earl of Lemongrab is one of the best antagonists currently on television. It is important that I say antagonist and not villain. Lemongrab opposes to the protagonists, and is a foil for their actions. Rarely is he truly villainous, though, and even then it is the logical extreme response to previous situations. His presence always signifies a meaningful emotional challenge for all of the people involved. He’s – no joke – probably one of the best representations of Frankenstein’s monster in any recent media. Yeah, that’s with Penny Dreadful on the table.

In the ol’ 3×3 alignment chart, Lemongrab would land squarely on the Lawful Neutral side of things. There is a fair amount of debate about this online, particularly if you feel like looking up Adventure Time alignment charts. There are many who seem to consider him Lawful Evil or Neutral Evil, but I can’t stress enough how he is not evil. I don’t really know much about the 5×5 alignment charts that include moral and impure axes, but people most often list him as Lawful Impure, which isn’t exactly right, either. I won’t discuss the more offensive charts out there. I know this doesn’t mean a lot to people, but it’s important to have a starting point for discussion. The Earl of Lemongrab not being an evil antagonist is a big deal, as it is a great use case for creation and game running.

Let’s face facts. If the problem is evil, the solution will be some form of weapon-induced murder. If the problem is too powerful for the PCs to handle, you can only trot it out so many times without justifiable frustration setting in, or having it dictate the feel of the game. Having non-violent, non-evil problems to overcome is crucial to the social and exploration aspects of D&D.  These problems can take many shapes, but the key is to engender the same sense of active ownership and conflict that occurs in the immediacy of combat. The Earl of Lemongrab represents moral, personal, political, and economic adversity for the “main characters” of Adventure Time. 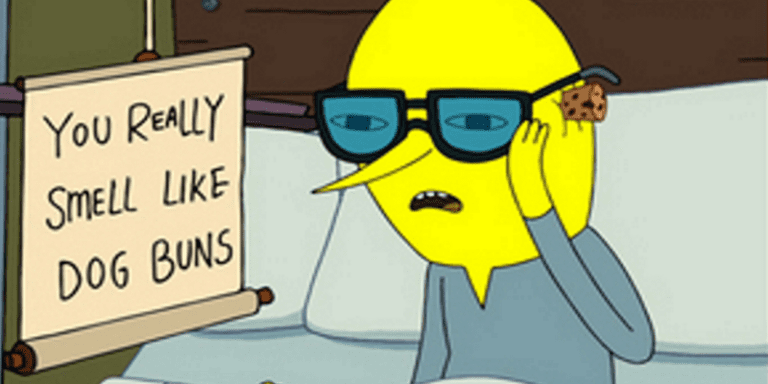 To briefly summarize, Princess Bubblegum is the scientifically-minded ruler of the Candy Kingdom, and creator of the candy people. Having no heir, she created Lemongrab from lemon candy to rule in her place if something should happen to her. Instead of raising him in the Candy Kingdom, she placed him in the lands of Lemongrab, of which he is the Earl. He is a failed experiment, according to her, and was thus left alone. The candy people are not familiar with him, nor are Princess Bubblegum’s friends. Unlike the other candy people, he looks like a full-sized person with a lemon head. He also rides a lemon camel, which is similarly put together.

He first appears when Princess Bubblegum reverts to being thirteen years old. Having been made aware of her condition, he rides to the Candy Kingdom to assume control of the throne until the princess is again 18 years old and can legally assume the throne. The princess is clear that he is legally able to do so, as she created him for this express purpose. He finds the Candy Kingdom in unacceptable condition, and begins assigning people to time in the dungeon. At first, these times are relatively low, but then grow to absurd time scales for the most minor of infractions. The princess and Finn, one of the heroes of the show, begin to prank the Earl in order to get him to abdicate the throne. They call him names, physically assault him, and burn him with extremely hot sauce. Eventually, the princess just turns herself back into being old enough to rule the kingdom, and he leaves, after some more name calling.

There are several key things to examine here. First, the Earl is well within his rights to do exactly what he is doing, even being legally confirmed by one of the main characters. Second, his personality and actions are a direct result of Princess Bubblegum’s creation and subsequent exile. He shouts at people, makes seemingly unreasonable proclamations, and doesn’t know about seemingly simple things. In a great example, Peppermint Butler serves him dinner. Finn and Princess Bubblegum pour the sauce into Peppermint Butler’s eye, and when Peppermint Butler freaks out, Lemongrab starts shouting at him to stop shouting, getting louder and louder. He also says he doesn’t know where food comes from, and when Peppermint Butler starts to explain, the Earl says he does not need to know, because he is noble, and Peppermint Butler is servile. Third, when it is explained there are people pranking him, he tries to play along but is unable to do so in a way that responds to any sort of social cues.

While he is extremely unlikable, he’s not villainous. He’s also not an idiot, or even intending harm. He performs exactly as he was created and learned to perform, and to the express discomfort of the main characters. Even after driving the Earl off, the victory isn’t one where the main characters feel any sort of lasting good. One of them is responsible for this situation, and rather than attempting to correct it, they reinforce the isolation and “unacceptability.” This is carried over perfectly into his next appearance. 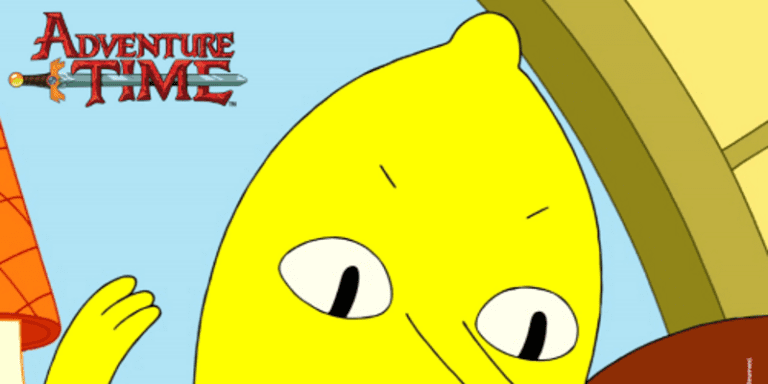 After discovering an elaborate surveillance network Princess Bubblegum has put into place, Finn and Jake are distracted by the Banana Guards discovering that Lemongrab sneaks into the Candy Kingdom at night to watch the candy people sleep. When confronted, Lemongrab is having a major crisis of confidence. He tells the princess he is lonely, and when she says she doesn’t understand, he responds with “No one understands me, and I am alone. You made me. You’re my Glob.” Glob is a Martian super deity, of course.

Princess Bubblegum’s response to this, rather than trying to understand the situation, is to take volunteers to go live with the man the candy people saw as an unreasonable, strange tyrant. Of course no one volunteers except for the city’s worst elements. They only do so to gain amnesty for past crimes, and require a sizable bribe on top of that. Upon arriving in the earldom, they resume their rebel ways, disregarding everything the rigid Lemongrab tells them. In response to this, Lemongrab attempts to recondition them with electroshock therapy. After a few days, he resumes spying on the Candy Kingdom.

This time around, Princess Bubblegum attempts to show him how to be a good ruler. She shows him how to play with people, be nice to others, and make friends. After a lifetime of receiving no physical affection, it repulses him. He rejects this attempt, and returns home. Finn and Jake offer to go and “crush this mess all accordingly”, which means an overt use of force, but Princess Bubblegum has decided to help the Earl.

At his castle, they discover the imprisonment of the candy citizens. They take great offense at this, and attempt to help them escape. Catching them in the act, the Earl imprisons Finn and Jake. Princess Bubblegum tries to free her friends, but Lemongrab corners her. Lemongrab declares her to be poison, as she is the one who made him this way, and begins to punish her. She is rescued by Finn’s heroics, revealing his continuing affection for her. Shortly thereafter, Lemongrab 2 walks in. The Earl of Lemongrab inspects the clone, and the two smile at each other, seemingly happy for a change. At the end of the episode, the two Lemongrabs are loud and inappropriate to the princess, Finn, Jake, and the criminals as they leave. 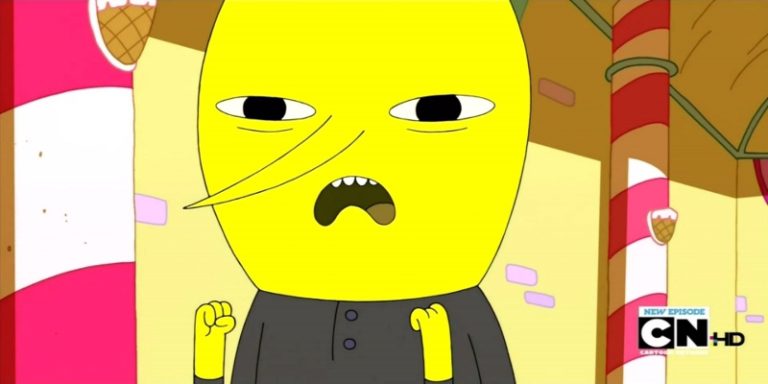 A Lemon Gives By Taking

From this point, it spirals in a continuingly darker direction, but never does it become evil. The further themes are the responsibility of creation, the lure of control, the pressures of expectations, and accepting the truth. These aren’t exactly easy, and each of the further episodes fully examines a facet of the main characters along with the arc of the Earl of Lemongrab. Through the eyes of the Earl of Lemongrab, we see the characters in new lights. Bubblegum is an absentee mother, an irresponsible scientist, and willing to act only after it becomes a burden to her. We are allowed to see Finn as someone blindly violent at the behest of someone he cares about. I could go on, but you get the picture.

The Earl of Lemongrab is not meant to be a likeable character, and he possesses no social graces. However, he does not act from an evil position (Lemongrab 2 is a separate character, and later creation, as is Lemongrab 3), and exhibits the same flaws as our heroes. This is the best sort of antagonist. These problems are not solved through violence, but through growth and understanding as a character; by atoning for mistakes and attempting to correct them. Sure, they don’t always work, and might even make things worse. The old adage of “no good deed goes unpunished” is undoubtedly true, as is the examination of being your brother’s keeper. It’s excellent writing and characterization. The Earl of Lemongrab is my favorite character in the show, and his flawed realness is a big portion of why. Let the Earl be the guidepost for your future antagonists.

To do otherwise would be unacceptable.