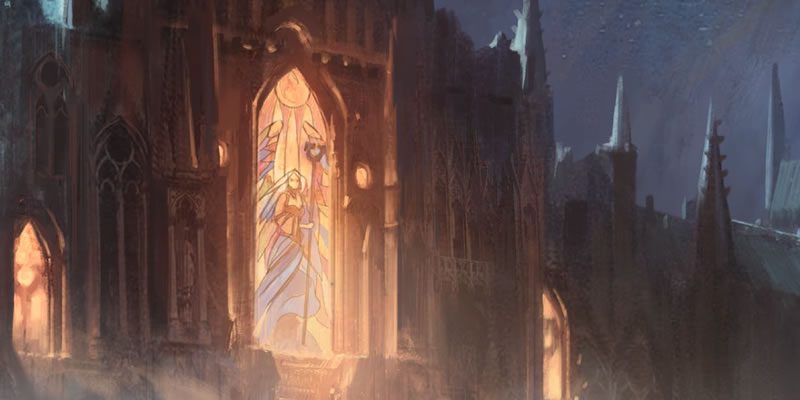 There’s no new Unearthed Arcana yet this month, and maybe we’re not getting one – but we have something at least as good, and that’s James Wyatt’s new adaptation of a Magic: the Gathering plane to D&D 5e. This was announced, um, Monday I think, and released yesterday. If you’re not familiar with Innistrad, it’s a plane of Gothic horror, and it got priority over other planes because Curse of Strahd is the most recent release from the D&D side of WotC. I take the view that this is a particular blessing because we can’t expect to see another official release for the Domain of Dread anytime soon.

WotC has been fairly explicit about relying on the DM’s Guild to fill in gaps to support non-CoS Ravenloft campaigns. I see a lot of conversation about WotC’s publication strategy online. I should write about it sometime, because it makes sense to me, but seems to really bedevil the folks expecting WotC to drift back toward the product density of every earlier edition.

Anyway. Let’s see what James has given us with Innistrad. Forty pages, not bad – really dense on high-quality M:tG art, sure – okay, four new human “subraces,” using a different set of rules for human subraces than Mearls showed us in the Gothic Heroes UA article. The “core” human has strictly baseline features – age, alignment, size, speed, and languages, all as you’d expect. Even in a setting that is all humans, there’s still one type of human that has being the most average as their special feature. This drives me nuts.

Folks, we can do better at describing humans as something interesting than +1 to all ability scores. Almost no one deliberately chooses the Player’s Handbook’s default human over the Variant Human, if the DM allows that option, because +1 to all ability scores sounds sort of good, but it just isn’t. Not when a feat, a skill, and two of those six +1s to a stat are the alternative!

The other three provincial origins are a lot more interesting, because their mechanics tell a story. James has taken the Variant Human and turned its many options into firmly defined things. Kessigers are natural rangers – and the ranger class has enough problems that you could really just have a Kessiger fighter and be happy. Compare it to the Variant Human: Dex and Wisdom are your two floating +1s, Survival is your free skill, and Fleet of Foot, Sure-Footed, and Spring Attack are the three features of the Mobile feat.

The Nephalians retain some breadth of choice – their feat is Skilled and their bonus skill is undefined. A character with four extra skill proficiencies is exceptionally potent if the DM makes exploration and interaction the robust areas of gameplay that they’re supposed to be. If the campaign is a pure meat grinder… well, play a Stensian.

The Stensians’ feat selection is Tough. Now, Tough takes a certain amount of flak in ranking feats, because while it does add up to a lot of hit points, getting half that bonus by boosting your Con is probably better because of all the other things Con gets you. Specifically, Constitution saving throws (including Concentration!), hit point recovery from hit dice, and a point of AC if you’re a barbarian using Unarmored Defense. As a racial feature, though, that kind of pure survivability is hard to beat. (Also +1 Str, +1 Con, and Intimidation.) Probably a net loss compared to the half-orc – Relentless Endurance stacks up reasonably well against +2 hit points per level, Savage Attacks is solid for any weapon-user (and amazing for Champion fighters, of course) to make up any shortfall there, and the half-orc has an unanswered point of Strength, and Darkvision.

Now, James doesn’t care about balancing Stensians against half-orcs, because Innistrad doesn’t have half-orcs, but the average reader looking for lootable game content might want to keep it in mind.

The breakdown of 5e’s character classes for Innistrad is solidly useful, particularly for those of us who played a little of the first Innistrad-based block, but didn’t go deep on absorbing its lore. This section frames the kind of campaign you’re likely to play in Innistrad, and the section following it goes a lot deeper into that.

James positions the PCs as faithful members of the church hierarchy, in a church where the object of veneration has just lost her damn mind. Not many settings delve into internal ecclesiastical conflict as this does, and I seriously dig it. I have some historical quibbles with the use of “cathars” for the Church’s crusading soldiers, but I’m going to bet this topic got debated to death when Innistrad launched, and I just wasn’t paying attention. It’s just… that word is about as specifically wrong as using the word “witch” for someone who hunts and brutally executes those suspected of witchcraft, their families, and their pets. (If you think I’m like a million wrong about this, it’s cool, I haven’t read all of the Innistrad lore. Explain in the Comments, please!) Having said that, cathars are heroic figures in Innistrad, and I absolutely love how the different flights (choirs, basically) of angels represent different clerical domains.

There’s a new background, the Inquisitor, which is perfect for cathars, and for French wolf– or werewolf-hunters, possibly accompanied by martial artists. Just sayin’. Anyway, the background sets up the Gothic slide into corruption quite nicely, giving the character just enough power to turn really evil. These are not nice people.

The next section is fourteen pages of monsters: variant werewolves, vampires (a curious midpoint between World of Darkness’s vampires and D&D’s), angels, geists (i.e., ghosts), and so on. This section would be worth cash on the nail if the product weren’t already free-as-in-beer. I particularly like the section on angels and the way geists fit into Magic’s color wheel. Then there’s the creepy doll, which does exactly what it says on the tin and I love it. I’m not going to delve into the mechanics of each monster, but the Vampire Neonate’s Aura of Silence feature is kind of odd, with an effect radius that is a number of feet not evenly divisible by 5. I’m so used to seeing silence employed to shut down casting spells with Verbal components that I had to think for a few minutes to remember that this would be great for, you know, moving silently.

Then there’s the Eldrazi – the horror that drove Avacyn mad, and transforms creatures into a wide variety of classic D&D monsters that wouldn’t otherwise fit into Innistrad. I like how all of this is presented: the document as a whole doesn’t assume that the Eldrazi is active in Innistrad, and James suggests that you can play a “straight” Gothic horror without Emrakul, or introduce her to kick the setting over. This riffs on the DMG’s Sanity mechanics; notably, this is Lovecraftian horror that doesn’t really dip a toe in the fraught waters of mental illness. I’m no authority on least-hurtful-presentations, but this stays so firmly on the idea that physical proximity to Emrakul causes physical changes that happen to be tracked with a mechanic named Sanity that I think it’s fairly safe.

The final chapter of the PDF provides detailed guidance to convert Curse of Strahd to run in Innistrad – specifically, making Barovia part of your Innistrad. I’m not reading this in exhaustive detail, as I want to avoid too many spoilers for the Curse of Strahd – I’m still hoping to play through it one of these days!

This Plane Shift is one of the most ideal applications of the M:tG/D&D crossover that fans of both games have been calling for since WotC bought TSR. Even if you don’t care about M:tG or Innistrad per se, the document is a phenomenal idea mine for any Gothic horror campaign. (I’m still amused that the setting name could break down to “Innsmouth + Strahd.”)