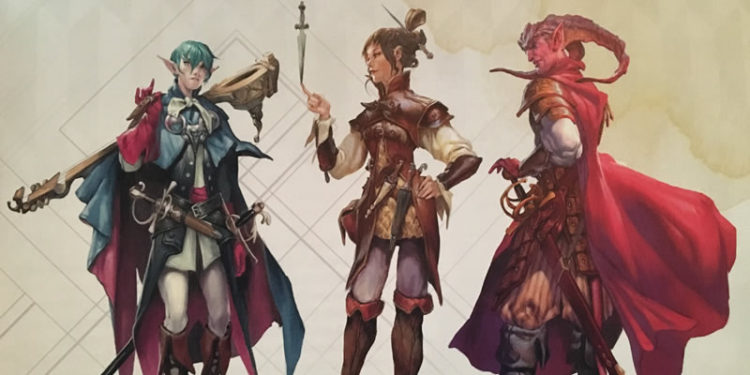 The History of the Classes is going on a break so that I can go through Xanathar’s Guide to Everything and examine each piece in detail. Think of this as my long-form, multi-part review, I guess? (If you’re looking for something shorter-form and already posted, well, Shawn has you covered.) I haven’t read much in the way of other folks’ commentary yet, so I’ll miss some things that “the whole internet” already knows. It happens. Colin has also been gracious enough to switch days with me this week, as I’ll be out of town and away from the internet for Thanksgiving.

I’m going to avoid reprinting rules as much as possible in this series, because I don’t care to test the bounds of fair use on a book that is, at the moment, eminently available in exchange for currency.

I’ll skate past the introduction and its recap of important rules and jump right into Chapter One. Thirty-one new subclasses means that I’m absolutely not getting to all of them in this article. Each class also has roleplaying notes and tables of additional ideas for character histories and roleplaying quirks. A lot of these need a delicate touch to avoid being an asshole at the table because you’re “just playing your character.” For example, the barbarian has a table of superstitions, and 3 of the 6 are about distrust or fear toward another class or common PC race. Mentioned once or twice, these are fine, but if it comes up every. single. time you take a short rest, you’re just trolling your friends. There are groups where that’s normal and fine, but please for the love of good gaming take a hard look at whether that’s true for your group before you make these a centerpiece of your portrayal.

Path of the Ancestral Guardian

The Ancestral Guardian barbarian thematically has the most in common with the Path of the Totem Warrior, in that they draw more on spiritual forces than on superior martial training. I’ve liked the theme here from the first moment we saw them in UA. The mechanics have been… more of a journey, let’s say. In principle, every barbarian can be a perfectly good tank (resistance to B/P/S damage covers a multitude of sins), though they’re more often played for raw damage output. Ancestral Guardians are for when you want to go deep on retributive tanking and improved mitigation for the party.

In short, I am a huge fan of this subclass. In addition to its surface-level usage, you can also make a phenomenal Rokugan-style samurai by combining an Ancestral Guardian barbarian with the Noble subclass. You might tweak one or two class skill options and trade shield proficiency for calligraphy tools proficiency, if you cared about that level of detail.

Path of the Storm Herald

This subclass, on the other hand, is one I was more dubious about from its first appearance. Thematically, I guess it’s fine, though it’s a lot more like three different subclasses. Unlike the Totem Warrior, you can’t mix and match features here. That said, if 5e had formal rules for things you had to do to train new levels in a class or subclass, I would be all about having Storm Heralds go to the ends of the earth to endure their flavor of storm.

I’m less enthused about this subclass, because I have a lot of skepticism about gameplay loops that are deeply aura-dependent. I expect them to slow down play and significantly push map-and-minis combat over theater-of-the-mind combat. In general, paladin auras don’t come up constantly, so keeping track of them isn’t as crucial as Storm Aura. Maybe it plays well and I’m worrying unnecessarily. Thematically, I’m not in love with this subclass, but it has strong potential if the player and DM dive into it. I’ll be curious to see if the Raven (Eagle) Totem barbarian in my campaign decides that Tundra Herald is what he really wanted to be playing all along.

Path of the Zealot

For some reason, it still kinda surprises me that they thought to pair barbarian with divine themes to create another version of 4e’s ultra-stylish avenger class. In principle, I really like this idea. They even justify not wearing armor! Just don’t look to them to be the party’s Stealth strike force, unless you construct that with your background or a feat. Depending on what you think is most iconic about avengers, you could also build them as monks (Kensai, Sun Soul, Shadow… kinda whatever), Vengeance paladins, probably some flavor of cleric, or Assassin rogues that just have some sort of oath or creed.

I like what the Zealot brings to the table. I’d use a flail in place of a scourge and play one of these as a flagellant in a Warhammer Fantasy-flavored 5e game. Between this and the Ancestral Guardian, I’m genuinely impressed that XGTE has gotten me invested in the idea of playing a barbarian. It’s a first within D&D, because psychopath with an axe is a villain concept rather than a fun PC concept to me.

As we shift into the bard, let me start with what the text offers on flavor. The suggestions of Defining Works, Instruments, and Embarrassments revolve around the bard as a traditional musician. Yet 5e has worked incredibly hard to expand the class’s concept toward scholar (Lore), pseudo-warlord (Valor), fey emissary (Glamour), knife… dude… (sorry, Blades), and psychic vampire (Whispers). It honestly feels like the left hand forgot what the hell the right hand has been up to all this time. I dunno, I see a lot of people play Valor in particular without touching the idea of performance as such. Maybe that’s just how my local player group does things.

I have the same problem with the flavor text here that I had when it debuted in UA. It strongly implies that all other bardic colleges are less impressive and cool than this one. I really need people writing flavor text for player options to use superlatives sparingly, because Coolness needs balancing just as much as mechanical throughput. If you had two bards of different Colleges in a party, you don’t want the book to come out and say that one is cooler and more feared or respected than the other, just because it was written later.

Other than not being sold on Mantle of Inspiration’s flavor or mechanics, I like what goes on here. Fey bards are fine and good. I can imagine wanting to play one, though I’m not sure it would be my first choice. What this doesn’t do is significantly change the core gameplay loop – this plays like a Lore bard with a shifted spellcasting and Bardic Inspiration emphasis. The College of Swords is the other kind – it’s more fighter-y than even Valor. Then there’s Whispers – roughly Lore-like gameplay in combat, but totally different social interaction handling.

It’s interesting to see a bard that is more explicitly a circus performer, even a sideshow act, than a musician. The original UA version didn’t distinguish itself enough from the College of Valor’s mechanics, but that’s improved considerably here.

What I see here is a class that is stretched very thin for bonus actions if it chases two-weapon fighting, since Bardic Inspiration and some key bard spells need bonus actions. It’s also so hungry for uses of Bardic Inspiration that it’s a tough row to hoe at 3rd and 4th level, until Font of Inspiration comes along at 5th level. Until Master’s Flourish mitigates this somewhat at 14th level, it has a deep tension between selfish (Blade Flourish) and support (all other Bardic Inspiration functions) playstyles, which is about on the level of playing a cleric who refuses to prepare even one healing spell. You can play that way, but your party likely wonders what the hell you’re doing.

I could be wrong about this. Maybe playtesting showed that all of my concerns are total non-issues and the action economy and Bardic Inspiration supply are totally fine, and players don’t mind the tension of being full-progression spellcasters that seem to spend most of their turns not touching their spellcasting. Let’s say I’m dubious, to a degree that would steer me away from playing this as a PC. (I’d build an NPC stat block on it in a heartbeat, though.)

Man, these guys are bastards. Even Fiend warlocks don’t skirt this close to the edge of “are you sure you’re a good guy? I mean, look at your powers!” And, well, the flavor text backs that up with a vengeance. If it were less overtly magical, I’d say that this was the perfect fit for Athasian assassin-bards.

The College of Whispers is a fascinating design exercise, and it’s great that three of their four features are about social interaction rather than combat, but wow. This is the kind of character where you need a couple of showers after you play them, to get the slime off. I would allow this into a campaign only after a long talk with the player about their aims and expectations.

That’s it for Part One of what I expect will be a very long series. I have a lot of critiques here, but I’m excited about the great majority of what I see in Xanathar’s Guide to Everything. The barbarian and bard subclasses spin their classes in directions we haven’t seen a dozen times before (once before, in the case of the College of Swords).

You could define a great campaign setting by throwing a lot of emphasis on which subclasses you allow and which ones you ban. For example, I can imagine some great, meaty conflicts in a setting where all members of the barbarian tribe (many of whom do not have the barbarian class) have to choose for themselves whether they follow the Totem Spirits, the Ancestors, or the Zealous Outsider Tradition. Members of the barbarian class within that tribe become leaders with these three groups, supported by other conceptually-appropriate classes. (For instance, the Totem Spirit types can look to my Spirit Domain for clerics, and the options for the Zealous Outsider Tradition pretty well write themselves.)

A bard-heavy campaign or storyline that pitted Lore, Glamour, and Whispers against one another would be amazing, all the more so when you draw in the Investigative rogue and either the Cavalier or Samurai fighter, if appropriate to the setting cultures. To put that another way, the first six subclasses seem determined to explode pre-conceived notions of what D&D is about, and that is all I can really want from a book that is pointedly not titled Player’s Handbook II.

Thanks for reading! Next time, I hope to cover cleric domains, druid circles, and possibly fighter archetypes found in Xanathar’s Guide to Everything.

Xanathar’s Guide to Everything Available Today

D&D Edition Expansion as Told through the ...