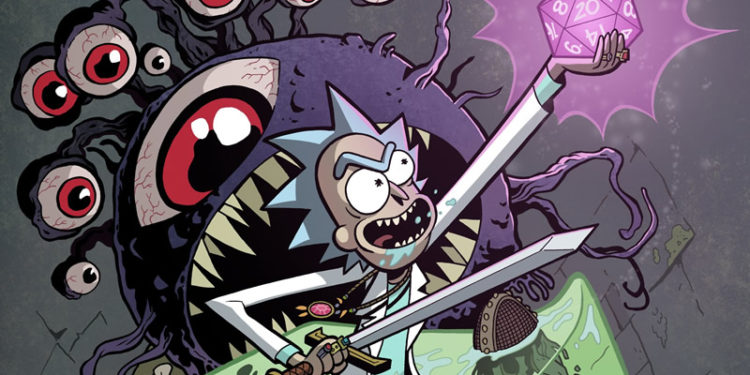 I just read this news from yesterday and it is awesome when two things you love come together. IDW has announced that they’ll be releasing a four-issue miniseries sometime in August 2018, featuring Rick and Morty in the world of Dungeons & Dragons, in partnership with Oni Press. This crossover is being written by Patrick Rothfuss and Jim Zub, with art by Troy Little.

Both of the authors are no stranger to D&D. Zub is currently writing the D&D Baldur’s Gate comic series for IDW. Rothfuss is big time fantasy author and celebrity D&D player known for being in Penny Arcade’s D&D game they play at PAX conferences.

Sounds like a fun premise. The Forgotten Realms or whatever D&D world they visit sounds just like any other crazy place this pair visits, as they zap from world to world, dimension to dimension or whatever Rick’s portal gun does.

SAN DIEGO, CA (April 8th, 2018) – Announced today at C2E2, IDW, in partnership with Oni Press, is bringing two of the most popular properties in the world, Adult Swim’s hit series Rick and Morty™ and Dungeons & Dragons, together in a brand-new four-issue comic book series. Taking the reins of these two iconic properties is the superstar creative team of writers Patrick Rothfuss (The Kingkiller Chronicles) and Jim Zub (The Avengers, Wayward) along with Eisner-nominated artist Troy Little (Hunter S. Thompson’s Fear and Loathing in Las Vegas).

Debuting this August, the mini-series will throw Rick and Morty into a high-fantasy adventure blended with the wit, humor, and intelligence the show is widely celebrated for.

“I love Rick and Morty™ with a powerful love, and I’ve played D&D since the 5th grade,” said Patrick Rothfuss. “So when they approached me about writing a story with both of them together? That’s some serious you-got-chocolate-in-my-peanut butter $#!& right there. I’m in. I’m all the way in. I’m gettin’ that chocolate all up in the peanut butter. Like, deep in. All the way in. It’s going to be sticky and delicious.”

In this summer’s biggest comic book crossover, Morty goes to Rick for help to learn about Dungeons & Dragons, the game all the cool kids at his school are playing; naturally, things go horribly wrong as Rick, Morty, and the whole Smith family find themselves on an epic quest with no escape in sight.

“The Dungeons & Dragons crew is letting Pat and I open a Pandora’s Box of insane adventure material and iconic creatures from the granddaddy of all tabletop role-playing games,” said Jim Zub. “I wish I could say we’ll take good care of it, but, the simple truth is, this is Rick and Morty™we’re talking about. No fantasy world or otherworldly plane of existence is safe.”

Each issue will feature variant covers that fans of both series will love, including character sheets, and more! Dungeons & Dragons comics from IDW by Jim Zub are available now wherever books are sold. Oni Press’s Rick and Morty™comics are also available where comics and books are sold. 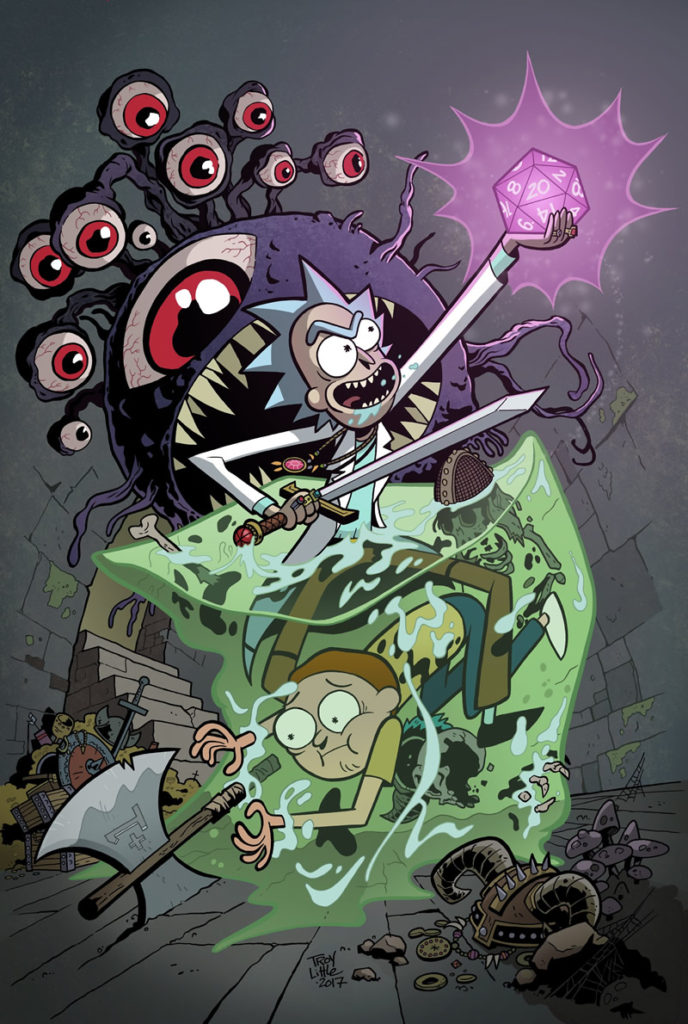 ABOUT WIZARDS OF THE COAST
Wizards of the Coast LLC, a subsidiary of Hasbro, Inc. (NASDAQ:HAS), is the leader in entertaining the lifestyle gamer. Wizards’ players and fans are members of a global community bound together by their love of both digital gaming and in-person play. The company brings to market a range of gaming experiences under powerful brand names such as MAGIC: THE GATHERING and DUNGEONS & DRAGONS. For more information about our world renowned brands, visit the Wizards of the Coast Web site at www.wizards.com.

IDW Games’ diverse line-up includes the international phenomenon Machi Koro, as well as hit licensed games such as X-Files, Back to the Future, The Godfather, and TMNT.

IDW Entertainment serves as the worldwide distributor of Wynonna Earp airing on the Syfy Channel in the U.S. and is producing BBC America’s Dirk Gently, based on the bestseller by Douglas Adams starring Elijah Wood and Samuel Barnett.