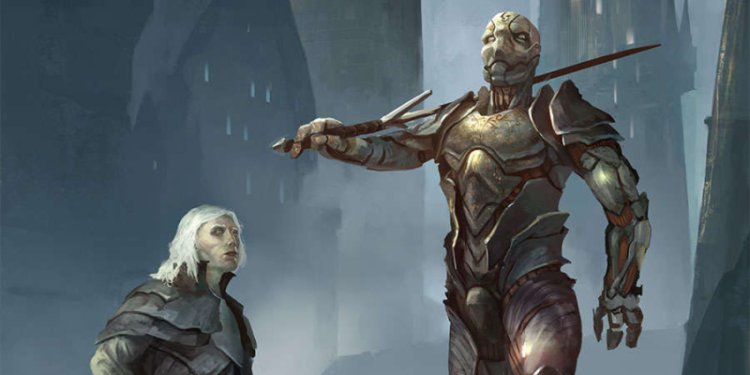 Last year I worked my way through the Wayfinder’s Guide to Eberron, which brought Eberron into 5e. Keith Baker, Ruty Rutenberg, and a team of other contributors now offer a collection of subclasses and… you know what, even summarizing the rest of the content is daunting (that’s a good thing). It’s a ton of different ways to enrich characterization of people, places, and things. The book’s conceit is that it is a discussion of classes available at Morgrave University in Sharn. In effect, this is Xanathar’s Guide to Eberron.

Disclosure: I received a copy of Morgrave Miscellany from Tribality for free, but as far as I know Tribality paid full price for it. To show my biases in full, I was otherwise going to buy a copy, because I am moderate-to-hardcore Eberron fan and moreover a Keith Baker fan.

First in our alphabetical order… and our hearts, this section starts out by redefining “barbarian” for the urbane, magitech setting of Eberron. First off, not all of Khorvaire’s cultures are the highly-developed Five Nations. Perhaps more importantly, though, you can play the class’s features without emphasizing its class name. This was a thing back in 3.5e as well – one of my friends played a barbarian as a John McClane Action Hero. You can take it as read that the setting description and commentary are well-written and to the point.

The new subclass here is the EXTREME EXPLORER (sick electric guitar in the background). It’s very friendly to a Lara Croft concept.

Overall this is a very cool barbarian path, though it’s more likely to kill you for just… using its features than any other subclass that isn’t Wild Magic sorcery. I like the concept of action heroes pushing themselves to the limit, but holy cow are these guys healing sinks. I’m going to say that either they need a self-healing feature (which could just be “when you receive healing, add X to the result”), or they need some better way to throttle the damage they’re taking through something other than just not using their core feature.

Okay, I wasn’t going to comment much on flavor text, but I have to highlight this discussion of bards in Eberron for being just surpassingly great. Worth reading for anyone who cares about fitting bards into any setting in interesting and varied ways. The new bard subclass, the College of Keys, is a concept I wouldn’t have looked for – lockpick bards? – but okay, sure, let’s see where this goes.

Overall, the mechanics deal so narrowly with disarming traps and opening locks that I don’t think this has a lot of legs for most campaigns. You don’t want to put your whole subclass into something that comes up once every few sessions. In the right campaign, it’s great, but it needs diversification into more common areas of gameplay.

The new domain here is Sovereign, for the Sovereign Host of Eberron. What it presents is more of a pantheon servant, a cleric serving gods in a collective way. This too would be relevant to my home campaign.

The Sovereign domain is… fine, very generic. If you want to play a cleric as a multitool, this is the one for you. Please, for your table’s sake, do the work ahead of time and collect the domain spell lists of every domain you can use. On the plus side, it’s hard to imagine a situation (other than being out of spell slots) where your primary features aren’t useful and don’t present you with interesting choices.

The druid flavor text of the original Eberron Campaign Setting was particularly memorable to me, with its five different druidic orders, so the text here that adds two more cultural orders (Talenta halflings and Valenar elves) particularly interests me. One of my favorite PCs I’ve ever played in tabletop gaming was a Valenar elf druid, in fact.

The new druidic subclass is the Circle of the Arbiter. The flavor text here is vague on what they do, other than preventing something related to the outer planes from happening. It’s kind of about being a Circle that includes every druidic order. Maybe the mechanics clear this up?

The flavor text is Grand Central Station for story seeds, which is not surprising with that whole two-years-after-the-Last-War thing. We get two fighter subclasses, rather than one. First, the Bone Knight – I recall its days as a 3.5 prestige class, and I’m excited to see its new coat of paint. Bones. Whatever. It’s not just Karrn – it’s Karrnasti!

I’m a fan of what I see in the Bone Knight. It could use another style-guide editing pass, but that’s more about looks than function so I don’t care all that much about it. Also, it does carve out a distinct concept and set of mechanics from the Oathbreaker paladin.

The second fighter archetype is the Vigilante. Its concept is “two-fisted crime-fighting hero,” I think? But let’s find out.

In short, I don’t like what the Vigilante is doing. I do want to see a subclass that makes an unarmored fighter competitive (ahem, not just a barbarian multiclass). This isn’t it: the HD and hit point sacrifice are double-dipping on cost in an unpredictable way. As a result, it’s very hard to make good decisions about when to use your primary subclass feature. I see this as the self-destructive cop: barely sleeping, working 16-hour days, staggering drunk most of the time, and so on, all so they can bring their spouse’s murderer to justice. This subclass is a loose cannon, and I want its gun and its badge.

That’s it for this week. I’m already past 4,000 words, with plenty of subclasses and other content left to go! When all is said and done I’ll offer a X-out-of-10 rating for the book. I haven’t read ahead at all, so I don’t yet have an overall opinion. Thus far, though, the flavor text is incredibly good, even as worldbuilding inspiration for non-Eberron campaigns, while the subclass mechanics are hit-or-miss. I really like the Bone Knight, and the core concepts of the Sovereign domain and Extreme Explorer speak to me.