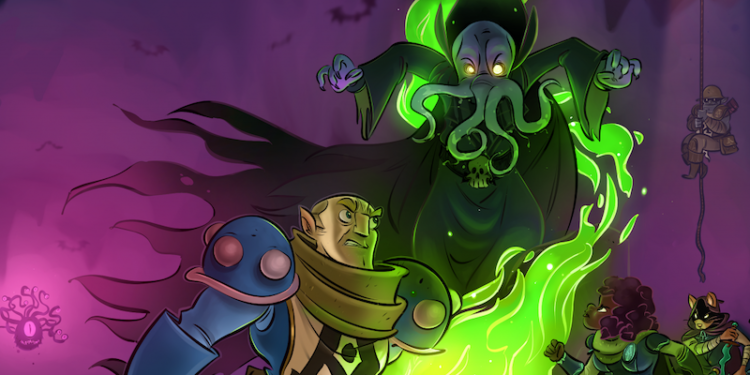 Setting9.8
Adventures9.6
Rules10
Monsters9.4
Art10
Cartopgraphy10
9.8Overall Score
A great book by some great people. The writing is top notch, the artwork is superb, and ideas and design are fresh and new. I couldn't ask for anything else except, give me more!

We now have an opportunity to start our own franchise! The Acquisitions Incorporated book gives us some fairly detailed tools to explore the business side of adventuring. As I am taking some classes for an MBA, I am really digging these write-ups. I know that a lot of this is tongue in cheek, but there was a lot of thought put into each page of this book. Even with the humor side of this, it all really works so well. Great Job Penny Arcade!

Overall I really really enjoy this book. There is significant groundwork that has already been fleshed out for you to add this to your campaign and help players enjoy the benefit of starting out with a “Professional” adventuring group. With that said, there are also tools for the Dungeon Master in the form of an adventure along with monsters and magic items that can be used by the players or non-player characters.

The franchise rules are spot on. The ranking system allows for an increased area of operational territory, a majordomo, staff of interns, crew, and subemployees, headquarters (with upgrades) and specific tasks to complete. But each of those features come with choices that you get to make. There are long lists of choices that are given to help you with ideas for your franchise. Along with those choices. The player characters take on an actual role within the franchise with special benefits. These benefits increase in effectiveness as the franchise “levels up!” 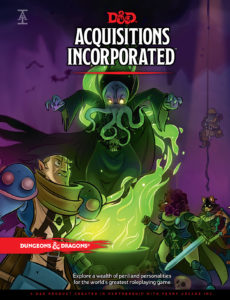 So what exactly is in the book? Here’s a quick rundown of each chapter:

Chapter 1: Acquisitions Incorporated – background of creating a franchise with a random table to generate a franchise.

Chapter 2: Growing your franchise – Lots of specific tools, territory details, tasks, HQ options, and call outs for a franchise along with player character options for PC positions. So many useful tools for players & DMs

Chapter 4: The Orrery of the Wanderer – An ADVENTURE!!! I likey! Lots of fun and nice art and maps! It is a lot of material and goes from page 79 to page 195. So many details, I’ll just it with the episode titles. The Dungeon master should be the one to read this, but if you want to get a leg up, I suppose the players could sneak a peek.

Then there are the appendices:

Appendix B: Monsters – Chaos Quadrapod (CR4), Clockwork Dragon (CR1), Deep Crow (CR9), Ancient Deep Crow (CR 15), Keg Robot (CR2), Splugoth the Returned (CR2), along with Iconic Faction Features
Appendix C: Vehicles – Battle Balloon (the art is WOAH!), Mechanical Beholder
Appendix D: Orrery and Components – Magic stuff – The six components can go into the Orrery of the Wanderer to be AWESOME! Or they can be used separately but not as effective.
Appendix E: Trinkets – a random table of 100 trinkets.

Overall I really liked the layout of the book, the art, and design of the adventure. A lot of talent went into this book, and I would love to see more come from this team of greatness. I highly recommend this book for an addition to your campaign world, or if you are already running a campaign, it would be easy to take pieces from it and use it.

Tell me what you think, and always have fun!
-Michael

Here is an Amazon link: https://amzn.to/2NrIIxA

The School of the Mistwalker