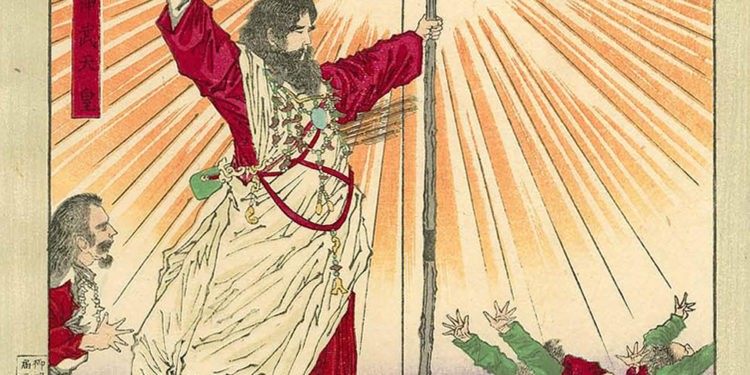 Have you ever wanted to play Dungeons and Dragons in a Japanese setting but want something from more authentic perspective? Well, here is the campaign setting for the fictional fantasy Japanese world of my own making: STORM EDGE – THE ADVENTURES IN THE EIGHT ISLES!

If you dare to venture into the islands beyond the stormy sea where the warlords vie for dominance as foreign forces- both from within and without the prime material plane – seeks to influence the fate of Yashima, the archipelago at the edge of the world… First, learn it’s history!

The Divine War and the Settling of the Old Races

Far east beyond the continent spanning realm of the Dragon Emperor and south of the Shimmering Peninsula, the legendary land of Yashima (translated as The Eight Isles) floats at the edge of the world. Home to the Immortal Sages and all manner of spirits, the land of The Eight Isles has long been the subject of tall tales. Some say it is what remains of the body of The Great Horned Serpent that was slain during the Divine War between the dragons and the giants at the beginning of time (Travelers from the Sunset Lands in the West may be surprised to learn that the Dragons in these parts of the world are wingless creatures with long serpentine bodies and antlers, and Giants have horns and sometimes extra sets of arms and eyes). Whatever the case, this is the land where our world crosses with the eternal realms of spirits and monsters, and where brave, wandering souls – the banished, the adventurous, the despairing – gather from across all corners to find a new haven beyond the edge of the divine storm that protects this land from the mainland continent.

After the end of the Divine War, with the might of the dragons and the horned giants waning, came the Dwarves. Or, if their claims are to be believed, they were always here, risen from the rocks and mountains of the land itself. Though the Elves claim they had been visiting the land from the spirit world of the Feywild long before any other race called it home. They were just waiting for the Gnomes to make it fashionable to settle among the lush foliage. No one knows exactly when the Halflings had wandered into this land or from where. Some claim they wandered in through some underworld pathway and then forgot the way back. At any rate, by the time the great host of Orc nomads, atop their fierce sword-beasts, arrived from the mainland continent in their great warships, the land of The Eight Isles was teeming with all manner of fantastical races that ended up there from a multitude of different lands and realms. 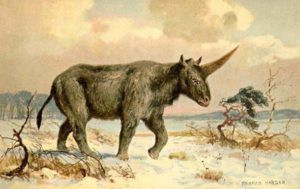 The Orc Invasion and The Great Harmony

The arrival of the Orcs, who were fleeing from a war raging with Goblinoids in the Shimmering Peninsula, saw the first major conflict in The Eight Isles. Aided (and manipulated) by the descendants of the great horned giants (the creatures called Oni) and knowing only the brutal ways of war, the Orcs sought to take this land for themselves. Though fatigued and hungry from their arduous journey, still none seemed able to stand up to them in their desperate conquest. The Elves hid deep away in the forest, the Gnomes beneath the ground, and the Halflings just fled at the sight of them. The host of Orcs stormed through the land unchallenged until they were met with the might of the Dwarves, who called upon the descendants of the dragons in heaven to aid them in their battle.

It seemed like the The Eight Isles would be torn apart again by the giants and the dragons as they waged their war through their respective proxies. The war expanded, waxing and waning, as it threatened to swallow the land whole. No one was safe. The Gnomes chose to fight alongside the Dwarves, while the Elves chose to completely abandon this plane, opting to wait the war out, even though they were not sure there would be a land left to return to. Although still trying to flee, the Halflings had nowhere left to run and some chose to join the Elves in the Feywild, while the remainder hunkered down, preparing for the worst. Even the great Immortal Sages hid away after their initial involvement that resulted in the fracturing of The Great Eight.

When help, and a resolution to the war, finally came, it came from above, literally. The Sun Queen Materu-Aki, hearing the pleas of the Immortal Sages, sent down the Celestial Solar prince Nigi-Midayus. He descended on the small twin islands of Nirai-Knai far south of Ukushi, leading a band of angels. Quickly uniting the small number of Humans that lived there (and falling in love with their Witch Queen Sakuna) the angel began the great work of uniting The Eight Isles. The first thing they did was to convince the Elves to come out of hiding and lend a hand in making peace. Then came the Halflings encouraged by their Fey-Touched cousins leading the spirits from Feywildes. Even gentle Firbolgs joined the cause of Nigi-Midayus and this new short-lived race.

The human numbers grew quickly as they moved North, making unions with all the races they encountered. It is said this was due to The Moon Prince Kuyami’s blessing, as the great dragon bemoaned the draconic descendants succumbing to the heat of warfare again. Soon, with the Humans and their allies outnumbering both the Orcs and the Dwarves, they were able to achieve a halt to battle. A pact of peace was made by the ancient mirror lake of Nio. All the Orcs wanted was to find a place they could call home. But they came to realize that driven by manipulations of the Oni, they had brought the war and bloodshed they were trying to escape to this land. The Dwarves too recognized that they had been too stubbornly bound to their honor and their image as mighty warriors, and now wanted nothing more than to return to their mountain homes. As symbols of truce, each side made offerings that became The Three Divine Artifacts of the Imperial family: The Sunflare Glass from The Celestials, The Nightshade Jewel from the Dragons, and finally, from the Giants, Storm Edge. This was the mighty divine sword found within the tail of the great horned serpent when the Six-Horned Storm King Susano slayed the monster. 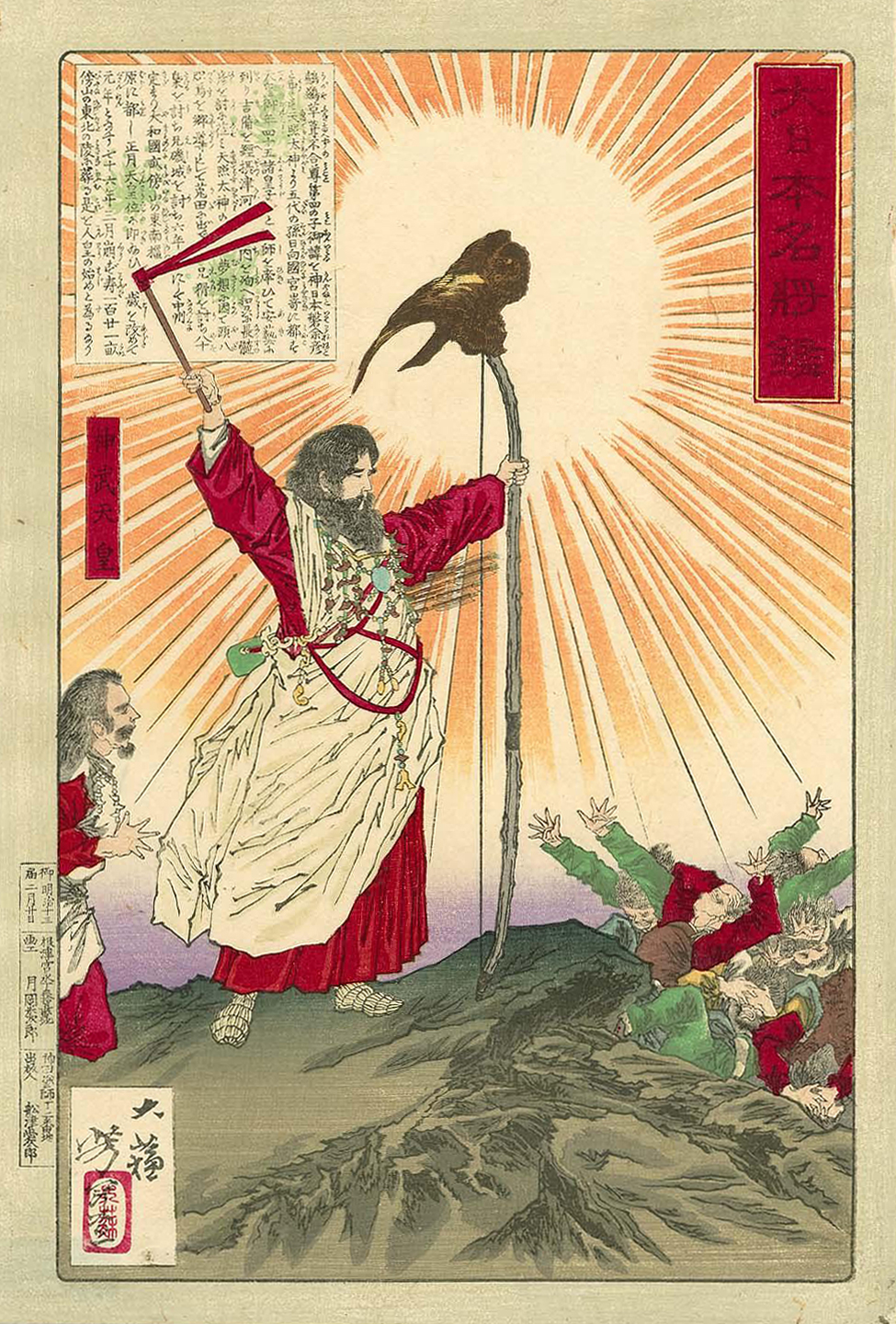 With the pact made, the Higher Dragons largely receded to heaven to join Kuyami’s court or under the Sea through Hinami, leaving the Lower Dragons to guard the rivers and lakes. Great Horned Giants, seeing that their brethren had caused great grief in The Eight Isles, took the majority of Oni along with them through Taiba to Shadowfell, leaving a few to shepherd and watch over the mountains and people of the land from corrupted Onis that escaped Susano’s capture. And with the Dragons and the Giants gone, the storms receded, opening up The Eight Isles to trade with the kingdoms in the mainland continent.

Thus, the Great Harmony, the pact of unification among all the races, was made and Himi-Iware, the Aasimer daughter of Nigi-midayus and Sakuna was crowned as the first Angel Emperor of The Eight Isles. Every Emperor since has always been Celestial-touched and The Imperial family has vowed to accept anyone who seeks sanctuary. This included even those of infernal heritage, Tiefling refugees who had been chased away from mainland continent. They in turn became some of the fiercest defenders of The Eight Isles, establishing the Five-Pointed Star, a society of highly trained mages. This led to a time of peace for the next thousand years, seeing a flourishing of culture and art. This period also saw the rise of the noble clans, descendants of the Angel Emperors, as well as the Samurai warrior class. Defenders of the realm, they were able to maintain the peace while fending off continued attacks by some of the remaining Oni and various manner of Monsters coming from other planes.

Continue on to Part 2 here. 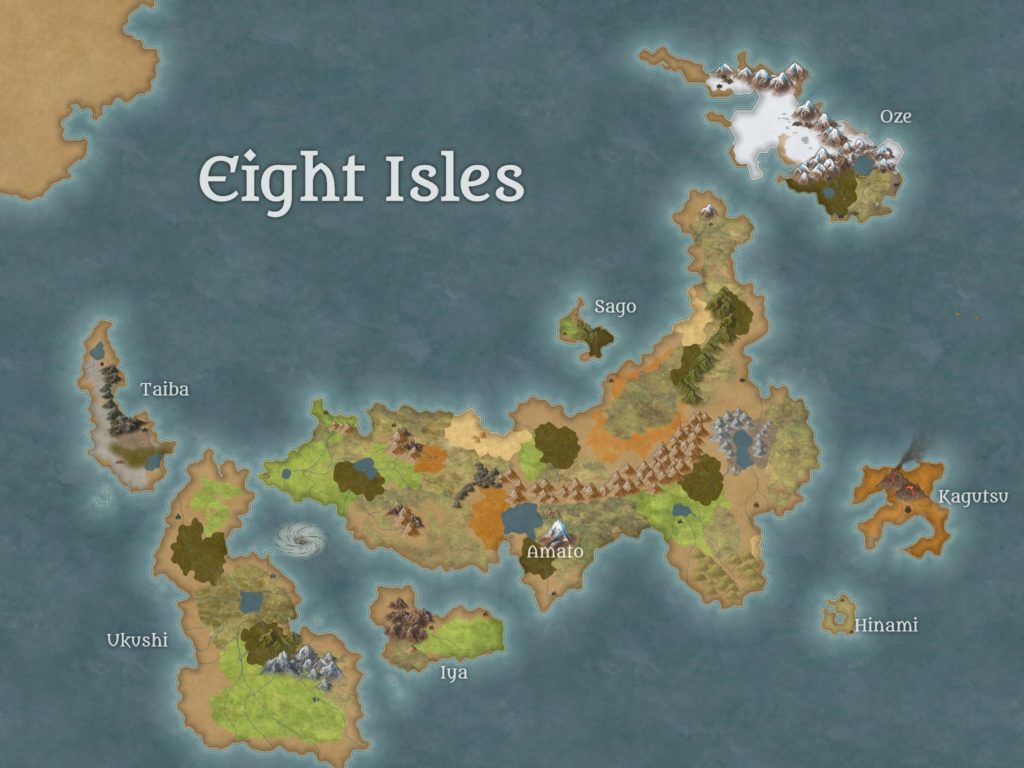